Last Week: Interest rates ended the week slightly lower, after reaching fresh highs mid-week, as equities remained flat amid falling oil prices. The U.S. 10-year Treasury note declined slightly to 3.18% while 1- month LIBOR fell to 2.3143% from 2.3160% the week prior. The price of oil continued to fall, dropping to $59.95 a barrel from last Friday’s $62.90, as the US Dollar strengthened, and Gold weakened.  Treasury yield volatility, as measured by the Chicago Board Options Exchange Treasury Volatility Index (TYVIX), fell to 3.82 from 4.43 this time last week.

Fed opted to keep rates steady. In a widely expected outcome, America’s central bank decided to leave short-term interest rates steady after raising them in September. Consistent with its economic stance at its last meeting, Fed officials maintained the view that the labor market and economic activity have continued to strengthen, noting that household spending remains strong, and that both headline and core inflation are near 2%, in line with the Fed’s target. In the only unexpected twist, Fed officials specifically noted that business investment had moderated from its rapid pace earlier in 2018. The Fed’s upbeat outlook suggests that it’s on track to hike rates again at its next meeting on December 19th. The big question now? The path of monetary policy next year as interest rates close in on Fed officials’ estimates of the “neutral rate” – a level that is neither simulative nor a drag on economic growth. The Fed will walk a tightrope over the next several quarters as the economy decelerates while at the same time job creation moderates – all under the constant glare of President Trump.

Rates initially rose after US midterm election, only to settle back to familiar levels afterwards. The election results confirmed our expectations: Democrats gained control of the House while Republicans held on to their majority in the Senate. In response, on Wednesday, rates briefly rose as investors’ fears about the elections and potential radical economic policy changes diminished. The divide in Congress will make it more difficult for the Trump administration to further its pro-business agenda, and usher in political gridlock that could slow economic growth. The President will likely have to rely more explicitly on executive orders to get anything done, and a second round of tax cuts will be dead-on-arrival as will most other significant legislative measures, outside of a bipartisan infrastructure initiative, which both parties want. Overall, the scenario will likely take some wind out of the Fed’s sails for continuing to hike rates throughout 2019, as any planned government-spending-driven economic boost will be curtailed just as growth begins to plateau/decline. We expect at least three more 0.25% hikes in the Fed’s current cycle regardless, and for the ascent of Treasury yields to slow as many investors use Treasuries to hedge against any weakness in global growth, stocks and emerging-market debt.

Rising US short-term Treasury yields prompt speculation of tightening financial conditions. The yield on the 2-year US Treasury note (2.95%) rose to its highest level since 2008 last week, following a strong US jobs report and evidence that wages rose at the fastest pace since 2009. Historically, when 2-year yields have risen relatively quickly, there has been a related drop in economic activity as higher interest rates both encourage savings and reduce the number of investment projects that make sense in a new world of higher borrowing costs.

US oil fell for a ninth consecutive session, entering a bear market. US oil prices fell from their previous peak of $76.41 a barrel to $60.67, roughly a 21% decline, officially a bear market. Why the plummet after reaching four-year highs in early October? Building uncertainty surrounding global economic growth and rising production, which was ratcheted higher by the Trump administration’s recent decision to issue temporary Iranian oil import sanction waivers to eight countries and recent data showing a rise in U.S. oil inventories. Non-US derived oil is also nearing a bear market. Most markets view falling oil prices as a sign of a weakening global economy.

What to Watch This Week: Important data releases and scheduled events in the days ahead will provide more clues on the tone of economic growth through the end of the year.

On the data front, New York and Philadelphia factory production surveys will show the pace of industrial activity mid-quarter, and reports on retail sales and industrial production will provide clues into how Q4 GDP will stack up. After logging an unsustainable 4.2% and 3.5% growth-pace in the prior two quarters, we’re expecting Q4 GDP to come in somewhere near 3%. That’s not a bad thing -rather it sets America’s economy on a path to grow strongly for longer.

A full calendar of speeches by Federal Reserve officials awaits in the days ahead, where the Fed’s gradual hike mantra will be hammered home. We’ll be reading between the lines for clues on the Fed’s view of its neutral rate, in hopes of gaining a better sense of how many more hikes we’ll see before the Fed stops hiking.

Take-Away: Fed Chair Powell & Co have a tough job: prolong the second-longest US expansion on record without making an error. Leaving monetary policy too loose risks stoking excess inflation and asset bubbles, while tightening too fast could cause a recession, prematurely snuffing out economic growth. While some are betting that the Fed will soon scale back its planned pace of rate hikes, we doubt it.

For now, we’re fully expecting the Fed to stop hiking somewhere mid to late next year and even see the Fed cutting rates in 2020 as the economic tailwind of fiscal stimulus fades, slowing the US economy notably by then. We’ll have a better sense of that upon release of last week’s Fed meeting minutes later this month on Nov 29th. The minutes could provide clues about the Fed’s thinking on a wide range of topics including changes to how it communicates to markets, the appropriate size of its shrinking balance sheet, and the extent to which it needs to keep hiking to reduce growth to a sustainable level. 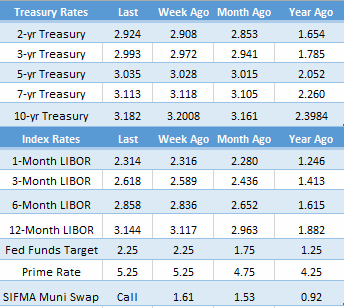 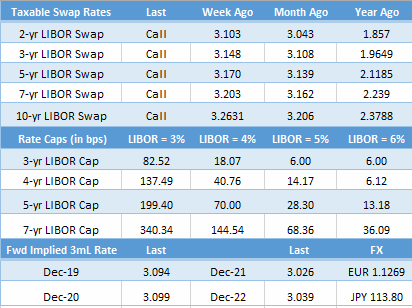 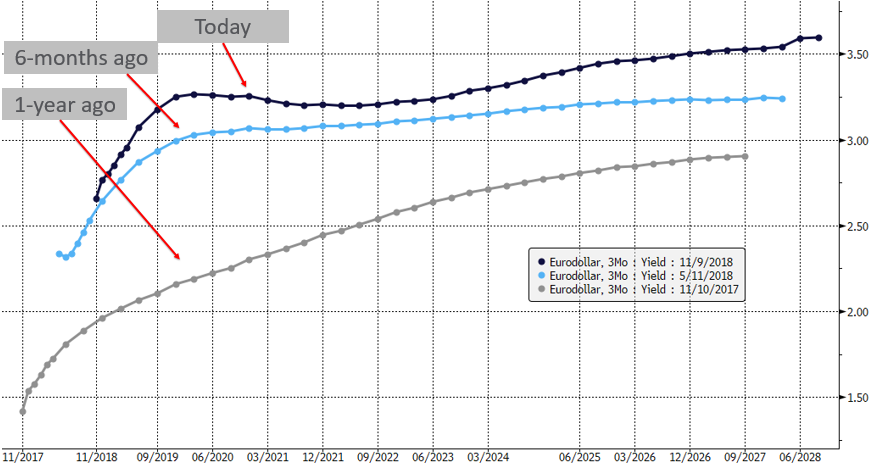 How to Dissect a Fixed Rate
Scroll to top