Fed Walks Highwire Amid the Fog of War

What You Missed: Interest rates rose across the curve as financial markets scrambled to find their footing amid escalations in the Ukraine war and shifting guesses on the timing and extent of future Fed rate hikes. The 10-year Treasury yield rose a whopping 26 basis points to wrap the week at 2.03%. Short-term rates logged similar moves, with the 2-year Treasury yield rising 23 basis points to 1.77%, as 1-month LIBOR rose nine basis points to 0.39% and Daily SOFR remained anchored at 0.05%. Elsewhere, Brent crude oil rocketed to $132 a barrel after the US, UK and Europe took coordinated steps to rapidly phase out imports of Russian energy products, only to stabilize near $100 a barrel near week’s end. Treasury yield volatility, a key driver of the cost of rate caps and other option-based interest rate hedges, fell to a three-week low.

Worst of inflation is yet to come. The US Consumer Price Index (CPI) rose to a fresh 40-year high last month, reaching 7.9% year over year. The critical energy, food and shelter categories all contributed to the rise. Headline CPI rose 0.8% month on month in February, matching consensus estimates. Buckle your seatbelt; with energy and food costs increasing sharply since February, March’s CPI measure will be even more alarming.

Our take: Under normal circumstances, a quicker pace of inflation like what was seen in last month’s CPI data would lead the Fed toward a 0.50% rate hike this week. But with the Ukraine dynamic ratcheting uncertainty higher, the ensuing wave of risk-off sentiment sweeping the globe means the Fed will be more careful and gradual in its rate hike actions. Fed Chair Powell all but assured markets in his recent testimony to Congress that a 0.25% hike is in the cards. While the Fed’s caution is understandable, its gradual approach comes at a cost: The state of inflation in the future is best predicted by lagged values of past inflation, and a more gradual Fed now likely means a more aggressive Fed later.

Some perspective is warranted: The primary reason the Fed was willing to look through price shocks stemming from supply-chain bottlenecks last year was that they mainly emanated from increases in the costs of goods, and not services. The Fed didn’t expect the price increases to show up in services prices, which have accounted for the bulk of inflation over the past two decades.

That assumption appears to be breaking down. As an example, the gain of more than 30% last year in prices of transportation commodities – excluding gasoline and jet fuel – is starting to show up in transportation services – in things like car maintenance, repair services, and insurance.

The same logic applies for why the Fed and other central banks tend to look through supply-induced oil shocks. The past two decades show that oil shocks don’t consistently pass through to services prices, but there are some very early signs that assumption might be fraying around the edges. Airfares surged 5.2% in the last month, with reports suggesting airlines seem more inclined to pass along higher fuel costs to the consumer due to the tailwind of strong post-pandemic reopening demand for travel. As long as demand is strong, it’s likely that companies from a spectrum of industries will be more willing to pass on higher costs to consumers.

Commodities rally takes a breath. After recording their largest weekly gain in its 65-year history, broad gauges of commodity prices slipped modestly last week. Crude oil fell about $20 from its midweek peak after the United Arab Emirates’ ambassador to the US indicated his country would encourage OPEC+ to produce more and Russia pledged to fulfill its contractual obligations. Normally low-profile nickel futures made headlines after a massive short squeeze forced the London Metals Exchange to halt trading for days. Russia is a major exporter of nickel, which is used in key products such as steel and electric vehicle batteries. Wheat, an export of both Russia and Ukraine, fell 7% from its recent peak but remains well above pre-invasion levels.

Our take: The supply disruptions resulting from the invasion will exacerbate global bottlenecks, causing inflation pressures to stick around longer, which will in turn weigh on global growth and increase the chances of recession. Prolonged inflation pressures will increase companies’ costs, reducing their margins and making their profit trajectories less favorable. For interest rates specifically, higher rates and high rate volatility will stick around as the one-two punch of commodity price-driven inflation fears and a Fed that’s leaning hard toward a series of modest rate hikes takes the driver’s seat.

What to Watch This Week: All eyes are on the Fed, which is widely expected to raise interest rates – the first since 2018 – on the heels of an unrelenting drumbeat of elevated inflation readings and an extraordinary set of circumstances driven by the unpredictability of war.

The Fed is walking a highwire of tough decisions: hiking too much risks sending the economy into a recession, hiking too little risks embedding expectations of high inflation in the minds of consumers and businesses, spurring them to ease off of spending and investment. Adding to the Fed’s woes , the worst of inflation is yet to come. We’ll get a sense of such via the slate of economic data lying in wait in the days ahead: Supply-chain bottlenecks are likely worsening again (Empire State Manufacturing Index, Tues.), while input costs (Producer Price Index, Tues.; import prices, Wed.) and housing prices (National Assoc. of Home Builders, Wed.; housing starts, Thurs.) likely continued their rise. The economy seemed strong enough prior to Russia’s invasion of Ukraine (business inventories, Wed.; industrial production, Thurs.), but with inflation on the rise anew, households might just decide to rethink their budgets and trim discretionary spending (retail sales, Wed.).

Big Picture: With Putin’s troops closing in on Kiev, and with US and European sanctions all but guaranteeing a deep recession in Russia’s economy, one of the following three scenarios will likely unfold: 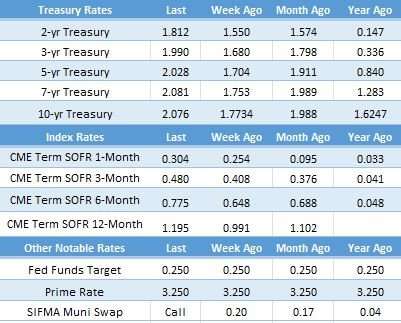 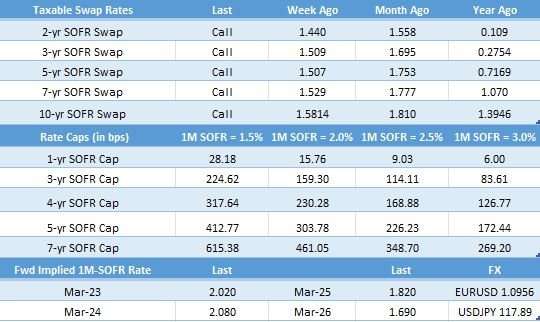 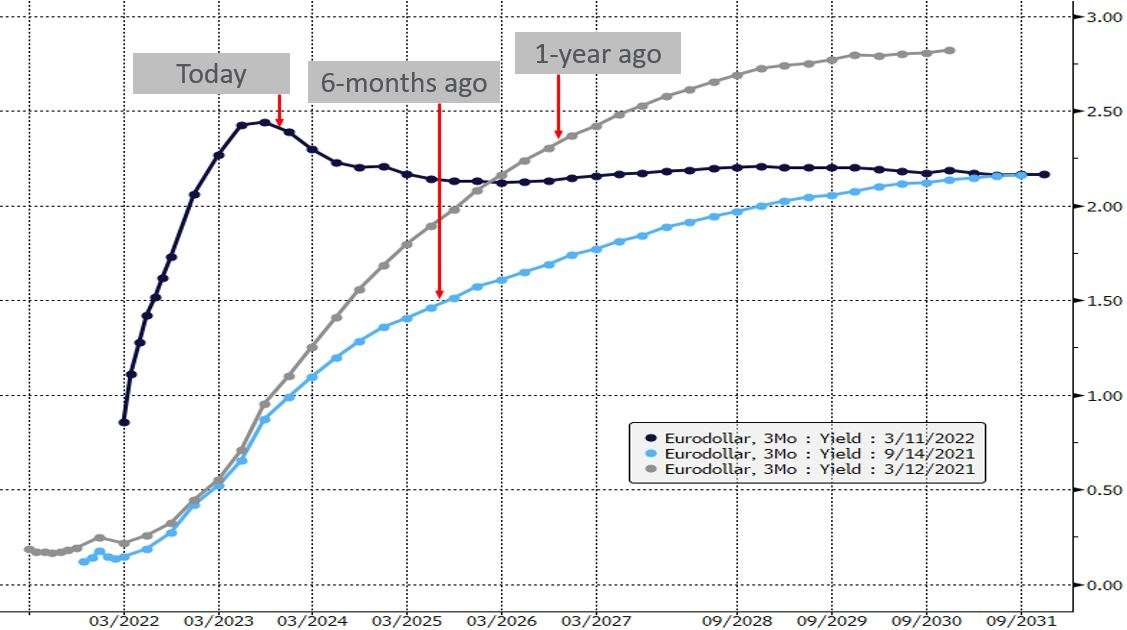 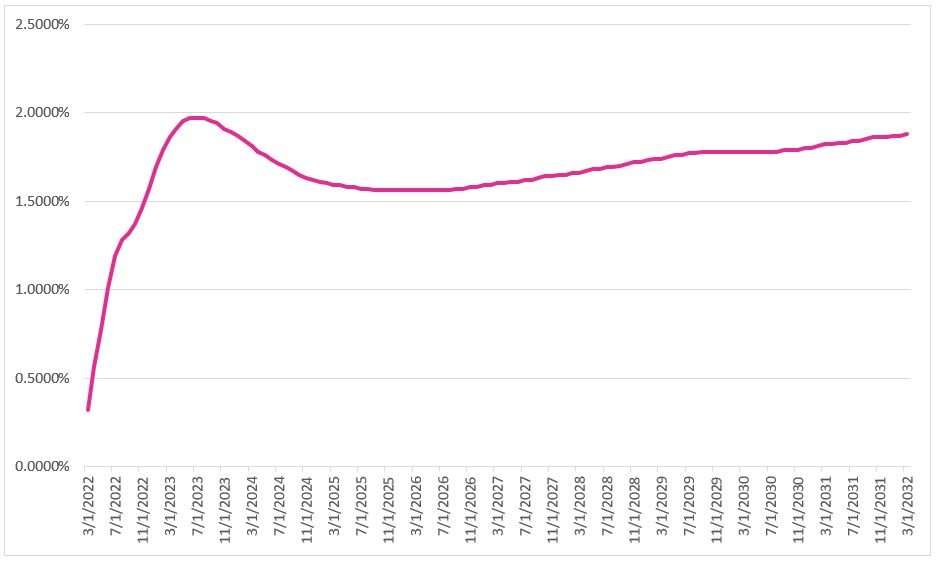 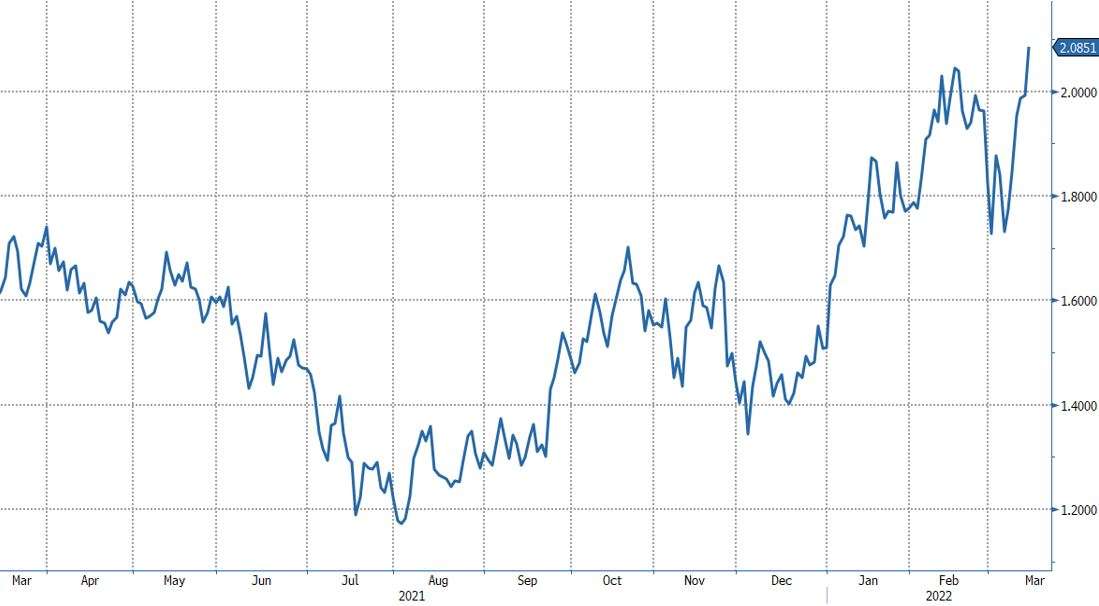