What You Missed: Long-term interest rates fell while equities reached fresh highs in the midst of hot US inflation numbers. The yield on the benchmark US 10-year Treasury note fell to 1.32%, its third weekly decline, following dovish US Federal Reserve comments, while short-term rates, like 1-month LIBOR, SOFR and BSBY, clung near rock-bottom lows. The price of a barrel of West Texas Intermediate crude oil dropped more than $2, to $71.06, on oversupply fears and reduced demand. The US Dollar and Gold both strengthened. Treasury yield volatility, a key driver of the cost of rate caps and other option-based interest rate derivatives, fell throughout the week.

Inflation running hot sent jitters through markets – is the fear justified?  Inflation, via the Fed’s favorite inflation gauge – the consumer price index or “CPI” – continued its rapid surge in June, rising at its fastest pace in nearly 13 years.  The CPI increased 5.4% from a year ago, the largest jump since just before 2008’s great financial crisis. Economists expected a 5% gain. If you remove food and energy prices, core CPI rose 4.5%, the sharpest move for that measure since September 1991 and well above expectations of 3.8%.

Our take: Sure, the inflation headlines are scary once again, but if you dig deeper, you’ll see that the data doesn’t imply that higher prices on most goods and services we all use routinely will show up, let alone persist. Here’s why: June’s CPI report shows – for the third straight month – that most (52%+) of the price pressures are in reopening sensitive categories like used cars, rental cars, vehicle insurance, lodging, airfares, and dining out.  If you throw in energy prices, that proportion rises to 66%. For some perspective, used car prices alone accounted for 20% of the year-over-year change in the CPI.

Despite the spooky inflation headlines, the makeup of the price increases means that the Fed can still subscribe to their “transitory” inflation belief and take their time in easing off the stimulus gas pedal.  If pressures begin to build in labor-slack sensitive services categories, the Fed may change its tune. In the meantime, as we’ve been saying for weeks now, expect the CPI to run hot all summer, as households flush with extra a couple trillion in savings are eager to spend after lockdowns, amid extreme supply shortages. For interest rates, it means that you can expect long-term rates to stay well within their current ranges through the fall.

Fun fact: Rents are roughly a third of the monthly CPI gauge. Even though last month’s CPI data showed that consumer rents are tame for now, the scenario may change should home prices continue their surge, and the back-to-work tide comes in this fall.

Powell and Yellen fired up the no-inflation PR train. During scheduled, widely anticipated testimony to Congress, Fed Chair Powell said that inflation has notably increased and will likely remain elevated in coming months before moderating. Powell added that America’s job market hasn’t recovered sufficiently for the central bank to reduce its support of the economy. He restated that Fed discussions are underway about when it might be appropriate to reduce – aka “taper” – the Fed’s $120 billion in monthly bond purchases. In support of Powell, Treasury Secretary Yellen echoed Powell’s comments, stating that she expects the American economy to see several more months of rapid inflation, although she also expects the recent startling inflation run to ease over time.

Our take: Despite the recent spike in inflation rattling everyone’s cages, creating more jobs is the Fed’s #1 priority right now. With roughly 7 million still unemployed when compared to the start of the pandemic, America’s job creation engine has a long way to go to make up for the slack. Until progress is made on the jobs front, you can expect the Fed to continue leaning into its easy-money, low interest rate stance no matter what inflation ends up doing. Don’t agree with us? That’s okay, the bond markets do, as evidenced in their lack of reaction to last week’s inflation data. If bond markets were really concerned by the data, long-term interest rates would have risen notably. In short, they didn’t.

Other data reinforced the view of a bumpy, post-pandemic road to recovery. The University of Michigan’s consumer sentiment index – a gauge of the overall health of the economy as defined by the always important consumer – pulled back last month amid accelerating inflation. Higher inflation reflects higher prices, which are now clearly eating away at consumer purchasing power in some respects.  Favorable buying attitudes are being eroded amid complaints about rising prices for homes, vehicles, and household goods. Many consumers, who alone are responsible for ~70% of US economic activity, will choose to delay purchases, rather than eliminate them.

Our take: As the jobs market slowly improves, we expect the reset in spending attitudes to prove temporary amid rising wages. In the meantime, rising home prices and equity markets, combined with accumulated savings, will support a strong baseline of consumer spending through the summer. Our belief is supported by the most recent data on retail sales, which showed a broad-based rise.

All told, the June data confirm the almighty US consumer – as opposed to investment by businesses – will underpin a strong recovery into the second half of the year. They’ll do so amid shortages restraining factory production, resulting in lean inventories and soaring prices in the near term. With enhanced unemployment benefits dwindling, and new jobs and higher wages lagging, consumer conditions for wanting to buy shiny new things will tarnish somewhat, quenching red-hot demand as their discretionary income gets squeezed. It’s a scenario that will show up in the form of lower economic growth than was expected just a couple of months ago. The dynamic only reinforces the Fed’s easy money/low interest rate/transitory inflation rate stance. The fly in the rosé? Broadening infections of the COVID Delta variant that spark new protection restrictions and renewed lockdowns, postponing a full re-opening of the global economy.

What to Watch This Week: It’s a skinny data and event calendar in the week ahead, with gauges on the housing market, including builder optimism, housing starts, and existing home sales on the docket.

We suspect homebuilder optimism is high and will be so for months to come. Inventory scarcity is creating a lucrative opportunity for growth, particularly in the single-family housing sector. At the same time, demand is set to remain high because of a strong recovery, historically low interest rates and behavioral shifts as the proximity to the office becomes less of a priority. Still, the rise in house prices is pricing some buyers out of the market as volatile lumber prices, supply chain disruptions and labor shortages will limit growth in the housing sector.

Elsewhere, the communications blackout period ahead of the July 27-28 Fed policy meeting commences this week, thus we won’t hear a peep from Fed officials.

Big Picture: It looks like the big dump in yields a few weeks back, evidencing the bond markets surrender to the Fed, will stick for a while. It is a sign that the Fed’s ability to suppress Treasury yields indefinitely has been fully absorbed and accepted by bond markets. Put simply, they’ve stopped fighting the Fed.

The question now is if the Fed can “thread the needle” and ease off the stimulus gas pedal without strangling economic growth, all while keeping long-term inflation in check. It’s a scenario that will take many quarters to play out, and if history is any guide, the Fed will likely succeed. Only time will tell. In the meantime, the Delta variant of the virus is slowly creeping higher in importance for interest rates. It may become a serious issue to the economy as it is quickly spreading and the percentage of vaccinations is still well below the 70% goal. Contact us to strategize. 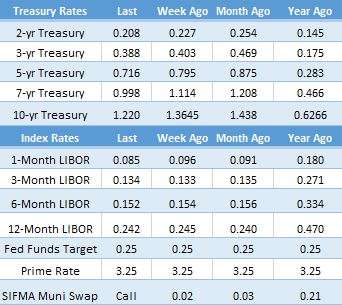 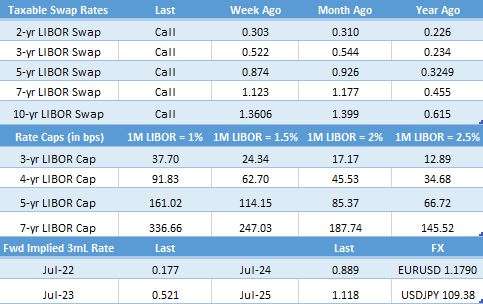 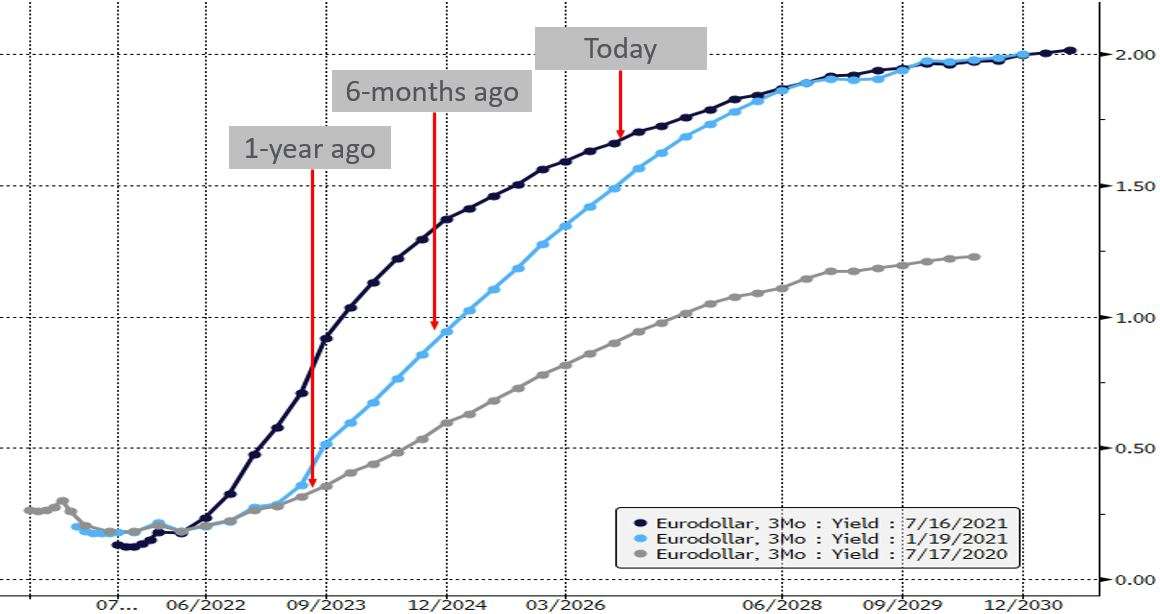 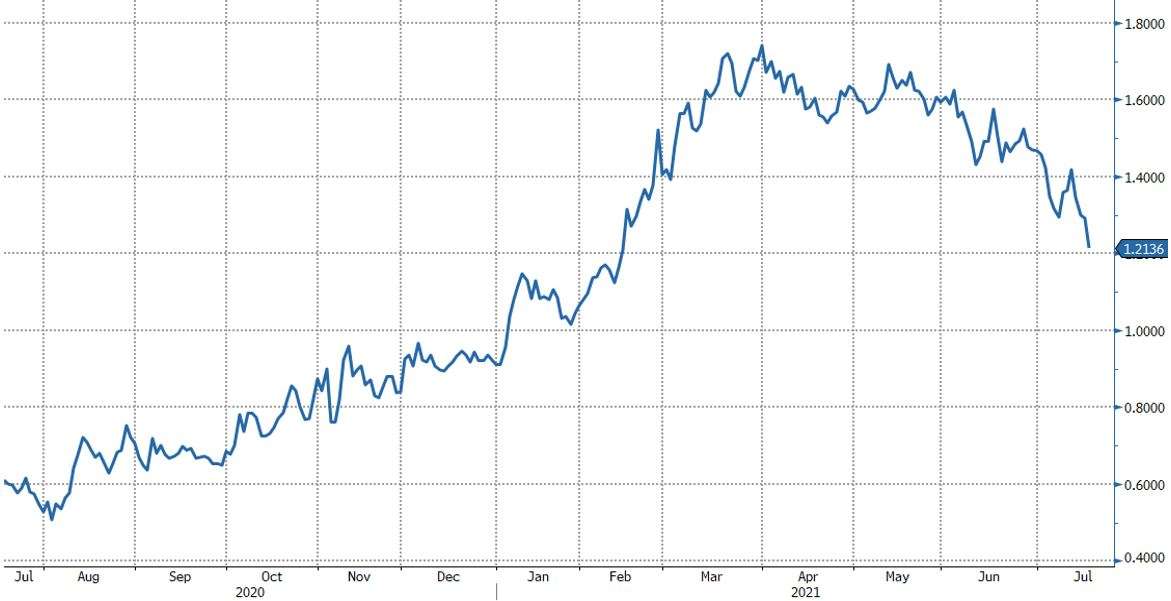