Last Week: Interest rates were mixed, and global equities advanced last week to new record highs, with the S&P 500 Index nearing the end of its best-performing month of August since 1986. The US 10-year Treasury note yield surged to 0.72%, following the US Federal Reserve’s plan to keep interest rates lower for longer, while 1-month LIBOR drifted lower throughout the week, settling at 0.156%. The price of a barrel of West Texas Intermediate crude oil rose $1.15 to $43.09, as the US Dollar continued its weakening trend and Gold rose. Treasury yield volatility, a key driver of the cost of rate caps and swaptions, moved higher throughout the week.

Fed announced new, relaxed approach toward inflation. The Fed announced a major policy shift, saying that it is willing to allow inflation to run hot to support the labor market and broader economy. The move, which was cheered by financial markets, effectively means the Fed will be less inclined to hike interest rates when the unemployment rate falls so long as inflation does not creep higher in the process. Fed Chair Jerome Powell also announced a policy tweak to unemployment concerns, which “reflects our view that a robust job market can be sustained without causing an outbreak of inflation.”

Why you should care: The Fed’s policy change puts it on an active course of striving for inflation, which is bad for bond markets, particularly for long term yields, like the 10-year Treasury. With the Fed now hoping to create or at least tolerate higher levels of inflation as the economy recovers, it sets the stage for a steeper treasury yield curve, with short term yields anchored near zero for years in the future, and long term yields free to drift higher without the threat of future Fed actions to keep them in check. (Don’t fully grasp the concept of yield curves? See our primer here.) It all means that from a practical perspective, nothing really changes in the short run. Settle in – the Fed isn’t going to hike rates for a long, long time. However, markets are pricing in some light at the end of the tunnel, like five years from now, and we’re now likely to see more volatility in longer-term yields going forward.  If you’re a frequent buyer of rate caps or swaptions, that means you’ll likely pay a higher price for them in the months ahead.

US consumer confidence fell for the second straight month and to more than a six-year low. The almighty US Consumer – who single handedly is responsible for ~70% of US economic activity – was the least confident in the future that they have been in years over the month of July. The data, which measures activity for July and contains an important read on consumers income and spending patterns, is significant considering that the somber measurement was taken in better times – just before the expiration of the weekly $600 in augmented unemployment benefits at the end of the July.

Our take: The data tell us that if the consumer was feeling this low during a time of turbo charged incomes via boosted unemployment benefits that have since expired, then a sharp drop in consumer income and spending for August is looming, and will remain a drag on growth until Congress agrees on an extension. While helpful, President Trump’s executive orders extending unemployment benefits – which have yet to be implemented in most states – are at best temporary. It is just another signal that the post-Covid economic recovery will be a long slog. We don’t know about you, but to us, it feels like the “easy” part of the recovery has come and gone. The behavior of consumers now that enhanced unemployment benefits have ended is a key variable for interest rate moves going forward.

Weekly jobless claims reach 1M – again. Our favorite high frequency reading of the state of the economy – weekly jobless claims – remained above 1 million, interrupting what appeared to be a more favorable trend just two weeks ago. According to the NFIB, a small business advocacy group, many small businesses are nearly back to where they were before the pandemic struck, with some even exceeding pre-Covid sales levels. But about 23% of small business owners say they will have to close if current economic conditions don’t improve over the next six months. Another 22% anticipate not being able to operate longer than 7-12 months. Our take: Given the fact that small business is one of the main drivers of employment in the US, the data tell us that high levels of layoffs continue to highlight the long recovery slog that lies ahead. A caveat: We’re going to like jobless claims data less and less over time. Here’s why: the effects of shadow joblessness – the growing ranks of the long-term unemployed no longer being eligible for unemployment benefits and subsequently falling off the jobless claims measurement radar – will slowly but surely render weekly jobless claims data useless in gauging the true degree of joblessness.

Double-dip US recession fears grow. According to most economists surveyed by the National Association for Business Economics, there is a 25% chance that the US economy will fall into a double-dip recession, driven by an intensification of the pandemic and an economic pullback in the fall.

What to Watch This Week: It’s jobs report week, and most expect the monthly gauge of the jobs market for August will show that the unemployment rate is still close to double-digits, even though hundreds of thousands of new jobs were likely created in the month.

We suspect another slowdown in the pace of hiring occurred in August, as back-to-school hiring usually seen in normal years simply wasn’t present this year amid stay-at-home orders from many of the nation’s school districts. If we’re correct, the hiring slowdown will follow on that seen in July, even as the economy continued to reopen. For some perspective, assuming that we have a 500K or so jobs gain in August, the level of US employment remains significantly below the pre-crisis peak after incorporating the 9.3 million cumulative rebound in May, June and July. The economy lost more than 22 million jobs from March thru April.

Other than the jobs report, a smattering of data gauging manufacturing and service activity this week will provide further insight into the state of the recovery. We don’t expect any surprises. Looking ahead, if the end of emergency income benefits to those with the highest marginal propensity to consume is going to have an impact on interest rates, then we should see it in the August retail sales report, due the morning of September 16, coincidentally the same day as the next Fed rate decision. Lastly, the elephant (and the donkey) in the room is of course the looming Presidential election, which will likely hold increasing and unpredictable sway over financial markets as voting day approaches.

Big Picture: The Fed’s change in inflation policy has lots of wonky details, that we’ll spare you from for now, and allows for inflation to probably run as high as 2.5% before the Fed hikes rates to slow it down. That is, if that level of inflation can be achieved at all – which we doubt. Running at just 1% through July, and only topping out at 2.3% over the last five years (in 2019), is inflation at 2.5% even possible given the depressive effects the pandemic has – and will have – on demand for months and years to come? We think not.

Why? The pandemic resulted in a sharp drop in consumer income, and given the heavy weight the consumer adds to prices and the economy as a whole, any pickup in inflation will not be possible without an increase in wage pressures, which ultimately come from an increase in jobs. Given the scale of the pandemic’s hit to the labor market, it is going to take years to restore wage growth, plain and simple. What it means for borrowers is years of ultra-low short term interest rates, but a gradually steepening Treasury yield curve, where short term rates are anchored at zero due to the Fed’s inaction and longer term rates, like the 10-, 20- and 30-year Treasury yields, slowly drift higher as the economy recovers and investors gradually get comfortable investing outside of the safety of US Treasury bonds.

Is your business prepared for such a scenario? Contact us to find out. 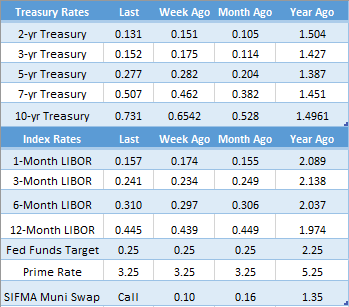 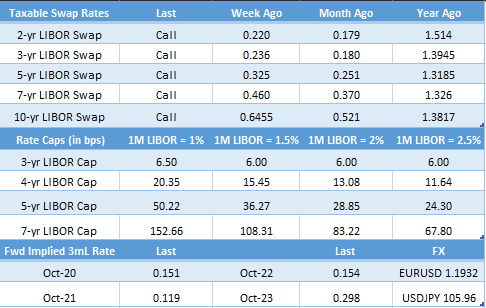 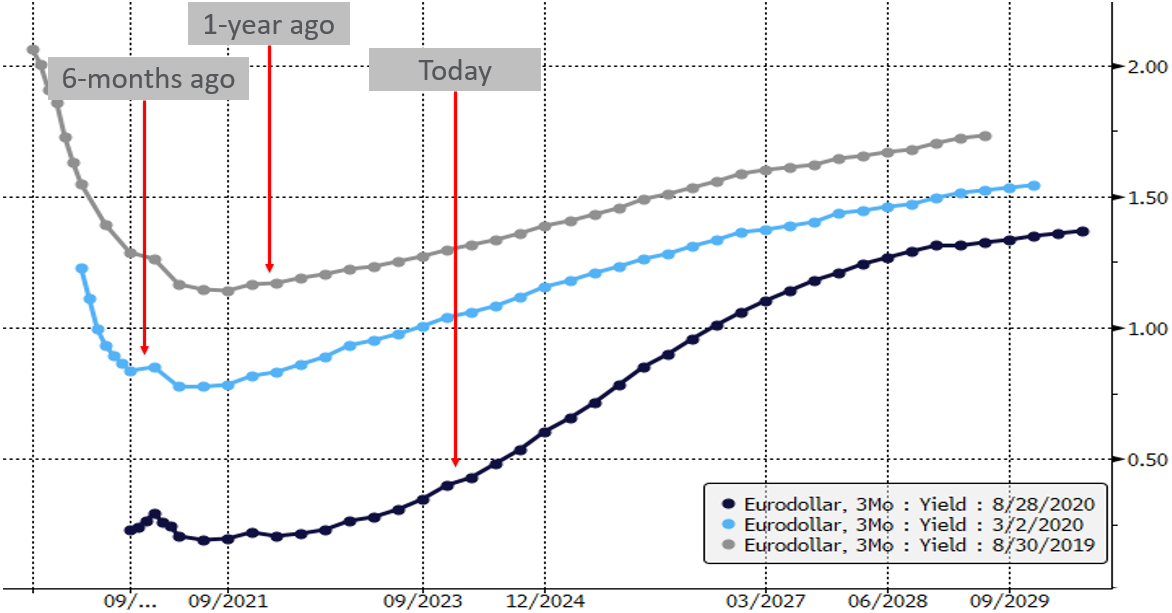 Click here for more DL Reports
What Will Happen to Rates When a Vaccine Shows Up?