Last Week: It was a quiet week in markets with most checked out for the holidays. Interest rates fell while equities were mostly flat to lower in holiday thinned trading. The 10-year Treasury yield fell to 2.4054% from 2.4756% the week prior while 1-month LIBOR followed suit, falling to 1.5642% from 1.5690% over the same period. Oil rose, the US Dollar fell, and Gold rallied. Market volatility, as measured by the CBOE’s VIX index, increased to 11 from 10.20 the week prior.

Speculation on the impact of tax reform was rampant. With markets in a holiday-induced stupor, most of the financial media was focused on trying to sort out the impacts of the tax law. There was more speculation than substance on the tax bill impacts however, and its impact on the economy will remain unclear well into 2018.

Consumer confidence took a hit. As expected, The Conference Board’s Consumer Confidence gauge finally fell in December (to 122.1) after posting two consecutive 17-year highs of 126.2 (October, revised) and 128.6 (November, revised). The biggest takeaway of the report was an improvement in consumer’s outlook for the jobs market. One question for the new year will be how to interpret data which is “less good” but historically strong.

America’s Trade Deficit rose. The U. S. International Trade deficit rose for November to -$67.9 billion, an increase from October’s $68.3 billion. Net exports could drag down GDP in the fourth quarter if this trend continues through December. The good news from the report was that exports rose by 3% to $133.7 billion, offset by a 2.7% increase in exports to $203.4 billion.

What to Watch This Week: The calendar is chock full of data releases and events in the days ahead, all compressed into a four-day week. Wednesday and Friday are the days to watch, with the ISM indexes (both manufacturing and services), data on auto sales and most important, December’s jobs report set for release.

We expect America’s job creation engine to remain strong, even though its pace will likely continue to slow from its 12-month monthly average of 260K back in early 2015 (its roughly 170K now). We’re expecting a faster pace of hiring this time around, with 200K new jobs in December.

While important, Wednesday’s release of the FOMC December meeting minutes won’t reveal anything new. Regardless, markets will be scouring the minutes for clarity on how the Fed incorporated expectations of fiscal stimulus (aka tax reform and future infrastructure spending) into their economic forecasts.

Take-Away: It’s going to be a solid start to 2018. Consumers look to be finally engaged in a sustained spending pattern, bolstered by strong job market, and businesses spending will eventually provide a tailwind by finally engaging in meaningful capex. The effects of tax reform, even though deficit-funded, will add to the positive mix, especially early in the year.

A stronger and strengthening economy should cause inflation to show up, although not well into the year. Fed hikes will likely accompany it as the FOMC seeks to do its job and make sure growth doesn’t get out of hand. Regardless of Fed hikes, the near decade-long economic expansion looks to challenge the previous post-WWII record.

In the meantime, markets are trying to figure out what tax reform really means for the economy. The big picture view of the lower corporate tax rate is that profits should rise for most companies. GDP growth will be boosted, especially next year, and wages will finally begin to rise a little faster (although still slower than everyone hopes), justifying sequential Fed rate hikes. What’s it mean for interest rates? Until the benefits of tax reform are really seen in economic data, yield curves are reflecting the market’s hopes and prayers that a tax-driven economic boost will manifest good times ahead. Does that mean interest rates will move higher? Not necessarily. Near term rates have definitely moved higher in recent weeks, but long term rates (7-10 years out) have traded flat or declined. 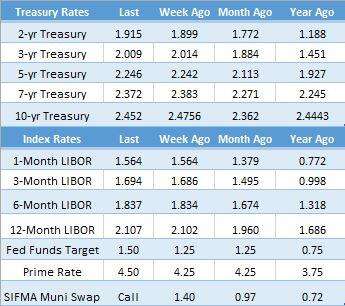 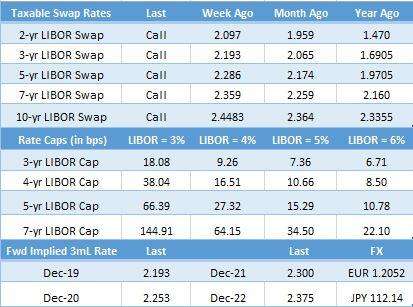 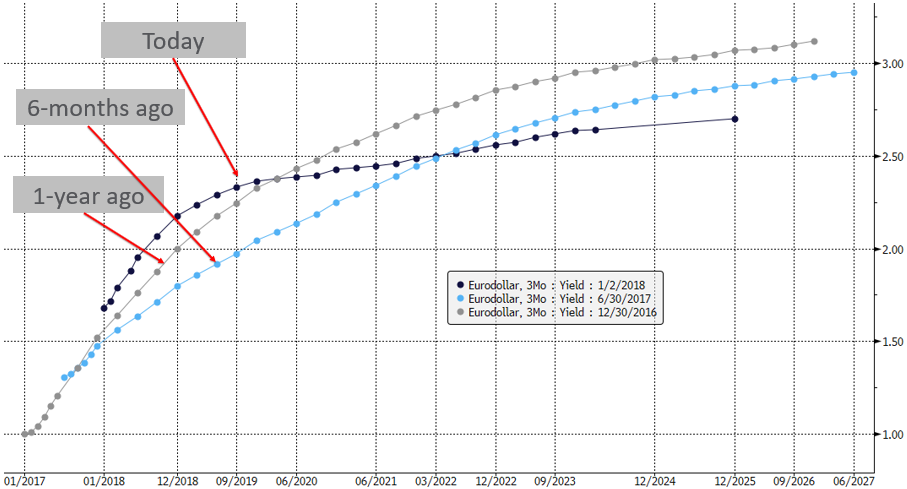