Fiscal Deal Too Late for an Economy at Stall Speed

Last Week: Longer term interest rates traded near the top of their familiar ranges, and equities rose for the second consecutive week on hopes that the administration of President Trump and US legislators would reach some form of a fiscal stimulus deal. The yield on the US 10-year Treasury note rose to 0.79% from 0.66% a week ago, as 1-month LIBOR stuck to a tight range near 0.1425%. The treasury yield curve steepened, with the 30-year yield climbing above its 200-day moving average of 1.57%. The price of a barrel of West Texas Intermediate crude oil increased to $41.28 from $37.35, as the US Dollar weakened, and Gold strengthened. Treasury yield volatility, a primary driver of the cost of rate caps and swaptions, leaped to levels not seen since mid-June.

Trump’s flips flops on stimulus talks are costing you money. President Trump reversed course to rekindle  coronavirus relief talks, which he had called off until after the election only hours earlier, dangling new $1,200 stimulus checks and relief for airlines. Democrats have supported a multi-trillion-dollar relief package while Republicans appear to prefer a series of smaller packages on mutually agreed-upon items. House Speaker Nancy Pelosi rejected the idea of a standalone bill for airline carriers without a larger coronavirus stimulus package. Absent more aid, jobless Americans will be living off their current allotment of benefits from the state or federal government that, in some cases, could amount to just $5 a week. Meanwhile, the Federal Reserve has routinely repeated its concern that a lack of further fiscal stimulus would jeopardize an economic recovery that has more momentum than expected, according to the minutes of the central bank’s September meeting.

Why you should care: Regardless of your political leanings, Congress’s negotiation quagmire and the President’s  changeable appetite for the timing and size of fiscal stimulus spurred a jump in the volatility of interest rates last week, which shows up – directly and immediately – in the cost of interest rate caps and swaptions, among other things.  What is volatility you ask? It’s a gauge that indicates just how much and how quickly an interest rate, like the 10-year Treasury yield or 1-month LIBOR, is likely to change over a given period.  In short, since financial markets are forward-looking, higher volatility = greater risk to the bank that’s selling you the rate cap or swaption, and hence, in an effort to protect themselves from the greater uncertainty that higher volatility implies, the higher the price they charge for them. Are you in the market for a rate cap in the next week? If so, you will likely pay more for it than you would have a week ago.

The sustainability of recovery is becoming an increasingly open question. Amid the recent layoffs announced by US corporations of late (most recently Disney @ 28K, Allstate @ 3.8k, and Goldman Sachs @ 400, and that’s on top of the previous announcements by United Airlines, Ford, Walgreens, Airbnb, Virgin Atlantic, Hilton Hotels, IBM, Uber, Chevron, Boeing, MGM Resorts, Hertz, Lyft, Coca-Cola, Salesforce, American Airlines, NBC Universal, Schlumberger, Daimler and Wells Fargo), combined with the spike in Covid-19 infections and stimulus gridlock, the economic outlook is increasingly cloudy (Derivative Logic is not laying off anyone, in fact we are looking for qualified people to join our team).  After the initial rounds of Fed and Congress-driven stimulus provided a cushion for recovery through late-summer, conditions may soon take a turn for the worse in the job market as aid to small and large businesses runs out. A pre-election fiscal stimulus package – which is unlikely – would arrive too late to stave off tens of thousands of layoffs across both the service and goods-producing sectors, and airlines in particular.

Fed’s meeting minutes leave the door open for more of “whatever it takes”. Minutes from the Fed’s September policy meeting, released last week, indicated that Fed Chair Powell & Co. wanted to retain some flexibility with respect to their new framework on interest rates, given the significant uncertainty of America’s economic outlook.

Our take: The timing of the meeting – the last one before the elections – suggests that the Fed’s economic projections may look strikingly different in November and December, and with them the Fed’s future actions of hiking or cutting rates, depending on the election outcome and the distribution of power in Congress. In short, despite the Fed’s “whatever it takes” rhetoric of late, the Fed is saving its ammunition until then. With the Fed’s available tools for speeding the economic recovery already pushing their limits, the meeting minutes once again showed that the Fed is looking to stimulus actions by the President and Congress – fiscal policy – as both a factor driving a stronger economic rebound and a major factor impacting the risk of a longer/deeper recession. Despite the Fed’s belief that more fiscal help is needed, Congress and the President have been lulled to inaction as financial market improvement and upbeat economic data have diminished lawmakers’ sense of urgency to agree on extending key aid, and now proximity to the election presents another big stumbling block.

What to Watch This Week: Financial markets will remain volatile amid shifting headlines on the Presidential and Congressional fiscal stimulus negotiations. In the background will be a steady stream of important economic data releases, which, on whole, will paint an upbeat picture of economic recovery, but one that runs the risk of petering out without more help from Congress. With less than a month before the election, the probability of a comprehensive deal remains low, and it appears the economic landscape will need to get worse before prompting our beloved politicians to act to make them better.

Due to the incessant back and forth in the negotiations, it seems that neither Democrats nor Republicans have the winning leverage in negotiations, thus it’s likely that markets and economic data will tip the scales  – rather than statements from politicians – in the form of a persistently unfavorable market reaction. We’ll see if we get one this week.

Big Picture: Since we’ve been calling for steeper yield curves for weeks now, the 30-year Treasury yield’s break above its 200-day moving average of 1.57% last week got our attention. While it’s likely this level will hold until America’s economic fundamentals improve, a move even higher is a real possibility in the near term given the coming avalanche of bonds from the US Treasury, as it seeks to pay for the current and looming rounds of fiscal stimulus (a greater supply of bonds vs. demand for them means prices for those bonds will decline, and their yields would rise).

Given that everyone expects the Fed to continue anchoring short-term rates near zero even after the election, such a move in the long-end of the Treasury yield curve would mean a dramatically steeper yield curve. The scenario becomes even more likely should a “blue wave” of Democratic presidential and congressional victories come to fruition, as such a political structure would result in even larger fiscal stimulus packages and an even larger need to issue US Treasury bonds to fund them. The expansive $3.5 trillion Heroes Act House Democrats proposed in May illustrates the sort of big- ticket package that could arrive in 2021. Tax increases will be along for the ride, but the tailwind to growth from income transfers and spending could be substantial.

Is your business ready for the possibility of higher long-term rates? Contact us to help you get there. 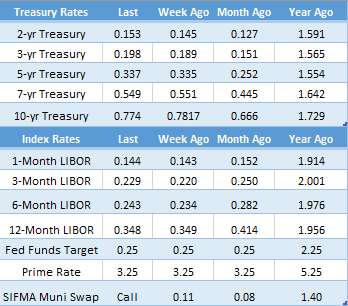 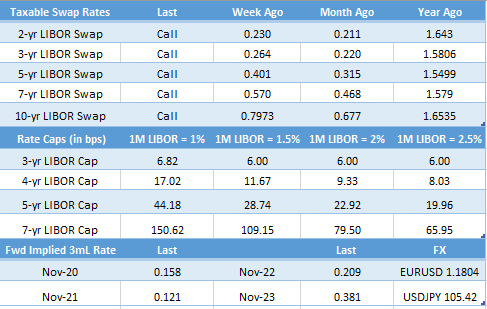 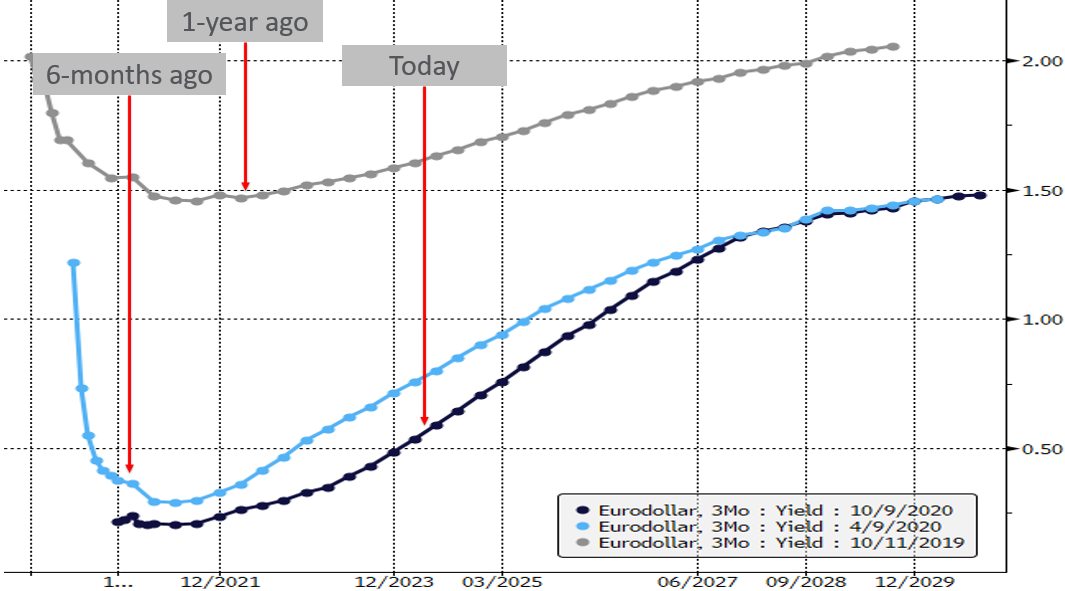