Last Week: Interest rates were mixed while equities edged slightly lower amid an uptick in volatility. The US 10-year Treasury yield slipped to 2.35%, while 1-month LIBOR continued its march higher, climbing to 1.2871% from 1.2504% a week ago. Oil and the US Dollar fell as Gold rallied. Market volatility, as measured by the Chicago Board Options Exchange Volatility Index (VIX), rose to 11.60 from 11.10 a week ago, but traded as high as 14.5 at midweek.

US House passed tax cut; Senate bill passed committee. The US House of Representatives passed its version of the Republican tax bill, and the Senate Finance Committee passed its version of the bill late Thursday, with the full Senate expected to vote after the Thanksgiving holiday. If the Senate passes its version, the differences in the two bills could be ironed out in a conference committee before a final vote. GOP leaders hope to complete the process by Christmas, though it could linger into early 2018 if the two versions of the bill cannot be reconciled quickly. Why should you care? The almighty US consumer, responsible for 2/3rds of economic activity and the driving force behind America’s post-crises economic expansion, is counting on the passage of tax reform and related tax cuts. If tax reform fails, consumer’s disposable income will likely take a hit and their pace of spending will likely decline.

Japan’s growth streak continued. Japan reported its seventh consecutive quarter of growth in the third quarter, the longest streak in more than 15 years. The economy expanded at a 1.4% annual pace last quarter, down from a growth rate of 2.6% in the April-June period. Rising exports were the main contributor to growth, and therein lies Japan’s Achilles heel: the Japanese consumer isn’t driving growth.

Eurozone maintained solid growth. Europe is experiencing the fastest growth rate in a decade, rising 2.5% year over year, which is a faster pace than the US’s 2.3% growth rate. While growth is solid around the world, inflation remains below central bank targets. Eurozone core inflation rose a scant 1.4% in October, well below the European Central Bank’s target of near 2%. Growth in the United Kingdom was more subdued than on the continent, coming in at only 1.5% annually.

What to Watch This Week: It’s a sparse week all around, with few important data releases and events on tap and a market that will mentally check out well before Wednesday.

On the data front, durable goods orders and jobless claims are the main focal points, with the former offering clues into businesses capital spending intentions and the latter being watched closely after it surprised to the downside unexpectedly over the last two weeks. We’re expecting good news on both fronts.

Markets are assigning a 92% probability that we’ll see a 0.25% Fed hike on December 13th. Given the high probability, markets will be scrutinizing this Wednesday’s release of minutes from the most recent FOMC meeting, which occurred on November 1st, for clues about how the Fed is rationalizing hiking in the midst of scant inflation and lackluster wage growth. The minutes could also offer more clues on the Fed’s plans for hikes next year.

Fed Chair Yellen speaks Tuesday – her first since her likely successor, Jerome Powell was nominated. Speculation is rife about whether she’ll stay on as Fed governor after Powell begins his term, and she could unveil more details her plans during the speech.

Take-Away: With the US House of Representatives passing their version of tax reform last week, markets are beginning to contemplate the tax plan’s eventual impact on interest rates. Most believe that Treasury yields will rise if the House’s version of tax reform became law, as it would increase the federal budget deficit and cause the Treasury to issue more bonds to fund it. Economic growth would be boosted, and inflation along with it, spurring investors into riskier assets, supporting the long-standing US equity rally and eroding support to own Treasuries. We’re not banking any of that just yet, as the details of tax reform could change significantly after the US Senate gets finished debating it sometime after the Thanksgiving holiday.

For the near term, a 0.25% Fed hike next month is now looking even more like a sure thing, and as a follow-on, the Fed has stated that it expects to hike three times in 2018 and twice in 2019. While markets and the Fed seem to agree on a hike next month, their expectations for interest rates diverge markedly after that. This difference of opinion is expressed in the flattening of the Treasury yield curve, where the Fed, by way of it pronouncements of hikes in the future, pushes short term rates higher and markets, via their disbelief that inflation and wages will rise significantly any time soon, push longer term rates lower.  The growing divide between markets and the Fed will have to be reconciled soon. Who’s correct? Only time will tell. In the meantime, borrowers are reassessing their financing plans, choosing to consider using more option based vehicles for hedging floating rate risk, such as interest rate collars or swaptions, or reconsidering fixed interest rate financing over floating. 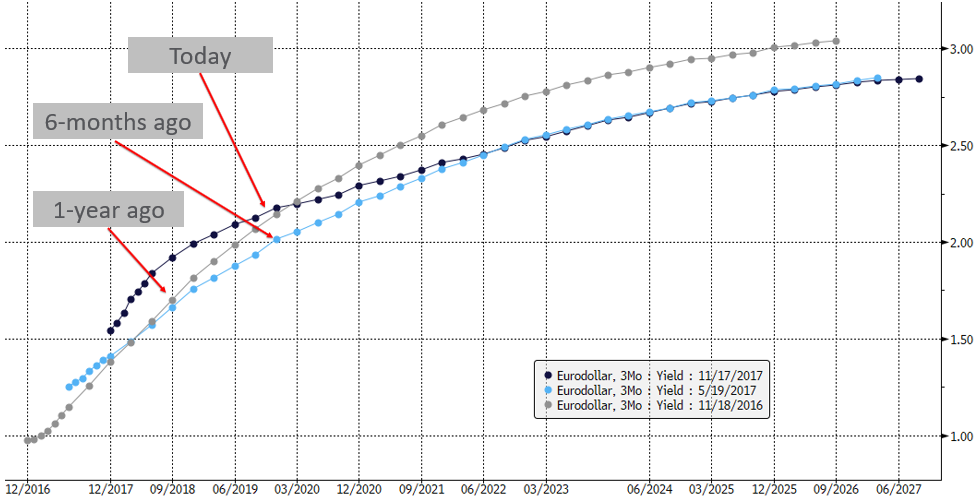