Last Week: Friday’s release of July Retail Sales data was the highlight of the week, and left markets disappointed as purchases by consumers were flat over the prior month. The lackluster report doesn’t bode well for an economy that is now dependent on vigorous spending by consumers to keep economic growth positive in the second half of the year as America’s businesses have shown little appetite for expanding fixed investment. One could say the US economy is flying on one engine.

Don’t tell that to equity investors though, as last week saw the S&P 500 log its sixth advance in seven weeks and the Dow finished just shy of a new all-time high on the back of evidence of climbing corporate profits in the tail-end of Q2 earnings season. Oil rallied while gold traded flat. The 10-year Treasury traded 8bps lower to 1.5068%, while 1-month LIBOR finished 5bps lower to .5066%.

The FOMC minutes from July’s meeting will be released on Wednesday, and are expected to imply a rate hike is technically possible this year, but won’t happen until December if at all, as the minutes paint the same theme of a gradualist, patient Fed. We’ll be on the lookout for any mention of longer-term issues plaguing the economy such as productivity, economic growth and neutral interest rates that have recently been the hot topic of Fed debate. Overall though, this set of minutes is less useful given that the meeting occurred prior to some major data releases (e.g. the July jobs report).

Take-Away: Given the economy’s reliance on the almighty consumer to drive growth in the medium term, Friday’s flat retail sales report for July was a big disappointment and set a tenuous tone for the start of Q3. It’s only one month’s report however, and as long as job creation and consumer sentiment remain robust, there is still hope for growth to climb above trend in the second half of the year, one of several necessary conditions for the Fed to realistically consider a rate hike.

We and other Fed watchers are now looking to Chair Yellen’s speech at the Fed’s annual Jackson Hole symposium on August 26, which provides her with a broad platform to shape expectations for the Fed’s monetary policy outlook for the September meeting and beyond. In the interim, we expect rates to remain largely range-bound and all else is mostly noise. 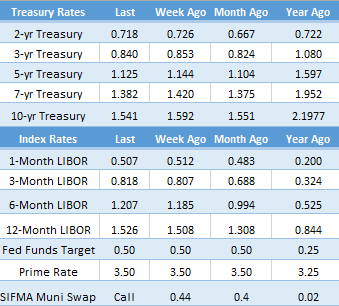 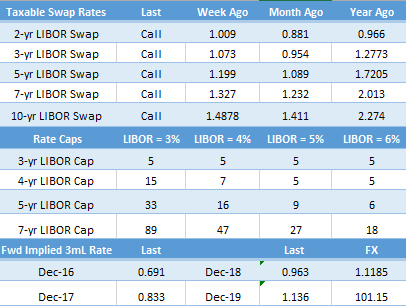