Get Ready For The Taper Tease

What You Missed: Long-term interest rates rose, and equities lost ground on the week as mixed signals on the state of the always-important US consumer befuddled markets. The yield on the US 10-year Treasury note rose 5 basis points to 1.37%, while short-term rates, like 1-month LIBOR, SOFR and BSBY continued to drift near record lows. The price of a barrel of West Texas Intermediate crude oil continued to advance, rising to $71.85 from $69.50 a week ago, as the US Dollar strengthened, and Gold weakened. Treasury yield volatility, a key driver of the cost of rate caps and other option-based interest rate derivatives, drifted higher through the week.

Latest CPI reading took some steam out of the inflation debate. August’s reading of the Consumer Price Index (CPI), one of the most frequently used statistics to assess price changes associated with the cost of living and therefore inflation, decelerated for a second straight month, to 0.3% from July’s 0.5%. The index rose 5.3% compared to a year earlier. Core CPI, which excludes food and energy, rose 4.0%, down from 4.3%, a 30-year high, in July.

The gauge showed that the resurgence of the delta variant has reduced price pressures for goods in reopening categories, e.g., things like airfares, rental cars, and the price of hotel rooms, as Americans dined and traveled less for fear of contracting the virus. However, the index also showed that higher prices persist in goods categories that consumers use frequently:  the cost of clothes, home electronics, appliances, and furnishings all remain near pandemic highs as supply-chain bottlenecks remain elevated.

Comprising about a third of the CPI, measures of the cost of renting posted monthly gains consistent with life before the pandemic, at 0.3%,the fastest increase since March 2020, while the larger owners’ equivalent rent measure – a gauge of rental inflation –  matched what’s been seen in overall inflation over the last few months. With the federal eviction moratorium now expired – some states have extended them – pressure to reset rents higher will likely drive more solid gains in rents into 2022.

Our take: While turning down the heat, the latest CPI data doesn’t spell the beginning of the end of the inflation debate, it just extends it. As the peak case load of the delta variant passes, some upward pressure on prices will return. The trillion-dollar question? What it means for the Fed’s tapering plans. In short, not much. We still expect the Fed will begin the process of formally easing off the gas pedal in December, at the latest.

August retail sales beat expectations. In another measure of the health of the US consumer, retail sales surprised to the upside in August, rising 0.7%. Stripping out auto sales, which have been held back by a shortage of semiconductors, sales rose a robust 1.8%. Along with a pair of upbeat regional Federal Reserve Bank indices from New York and Philadelphia, the data helped allay fears that the spread of the Delta variant is taking a sharp toll on economic growth. While inspiring, the data weren’t all positive. July’s retail sales gauge was revised to a 1.8% decline, from -1.1%. Total retail sales are down 5.2% annualized over July-August from the Q2 average. All told, retail spending continues to show a deceleration in consumer spending from a stellar performance in the prior two quarters.  Keep in mind the consumer has a lot of cash burning a hole in their pocket, and will be ready to spend anew once pandemic fears begin to ease.

Our take: Comprising 70% of America’s economic activity, the spending habits and attitudes of consumers are critical to the speed and breadth of economic recovery. The retail sales results are consistent with an economy constrained by supply disruptions and Delta-variant related uncertainty, spurring many economic pundits to recalibrate their rosy Q3 growth forecasts. Consensus now calls for a rise in Q3 GDP of 4.0%, down from 5.4% last month. Is it enough to delay the Fed’s tapering plans? Nope.

Lagging consumer sentiment warns of rocky jobs future. The preliminary reading of the University of Michigan’s consumer sentiment index –  an economic indicator that measures how optimistic consumers feel about their finances and the state of the economy – for September rose to 71.0 from 70.3 a month earlier. The consensus estimate was 72.0. Aside from last month’s print, this was the lowest reading since the pandemic began. The negative shock, related to the delta variant, of high prices and scant inventories showed little sign of easing.

Our take: The fact that consumers see buying conditions are so poor is in part a reflection of a view that buying conditions – the combination of product shortages and high prices – will eventually normalize. That view is evidence that inflation expectations, what the Fed cares about most, are still low. However, with some product shortages set to persist, a too-high and too-fast rise in prices on consumers purchases can change the inflation dynamic quickly, potentially causing the Fed to pull back the punchbowl sooner rather than later. Fun fact: A record 56 cargo ships are anchored off the Southern California coast awaiting space in port, further tangling supply chain snarls.

All of last week’s lumpy data leads us to the conclusion that the Fed will remain on its slow, methodical and measured path toward tapering asset purchases amid uncertain economic risks.

Warning signs from China. China, the world’s driver of economic growth over the last cycle, is slowing. Retail sales rose just 2.5% year over year, slower than the prior month’s 8.5% pace and well below estimates of a 6.3% advance. Industrial production missed estimates as well, rising 5.3% compared with August 2020, down from July’s 6.4% pace. The spread of the Delta variant has forced several port closures in recent months, and continued restrictions have restrained economic activity. Elsewhere, Evergrande Group, China’s second largest property developer, is on the verge of defaulting on its debt. While the story is covered extensively elsewhere, we expect the issue to leak into US financial markets, and US interest rates, eventually, as it’s revealed which US firms have exposure to the company.

What to Watch This Week: All eyes will be on Fed Chair Powell this week, as the Fed announces its policy decisions at releases its economic forecasts at the conclusion of its FOMC meeting this Wednesday.

When the Fed Chair gave his Jackson Hole speech a few weeks ago, signals of America’s economic recovery were solid: a spate of outsized job creation in June and July, combined with elevated inflation readings in those months, had convinced most of the Fed members that if the positive momentum continued, the Fed would begin to formally taper by year’s end.

Well, things have changed since then, and not in a good way: disappointing consumer spending and sentiment data; August job gains well below even the most pessimistic forecast; a hurricane that exacerbated supply shortages and energy prices; and activity data from China that showed surprising weakness. As icing on the cake, the U.S. government is a week away from running out of money to continue operations, with a funding bill still elusive.

Despite the gathering storm clouds, we doubt the Fed will be swayed from tapering by year end and will likely attribute the recent weakness to temporary factors while acknowledging downside risks from the pandemic and the fiscal standoff. The Fed’s post-meeting statement will tease that tapering is right around the corner by stating something like 1) inflation has met the criteria of “substantial progress” toward the Fed’s price targets and 2) the jobs market will log substantial improvements by the end of the year, both key requirements for the central bank to move forward with officially easing off the stimulus throttle.

On the data front, indicators on tap will provide clues to developments in one of the most-watched segments of the economy, the housing market: the National Association of Home Builders survey (Monday) and housing starts (Tuesday) will reveal whether supply constraints and labor shortages have held back construction; existing home sales (Wednesday) and new home sales (Friday) will tell whether the trend of softening demand since earlier this year continued into August. Jobless claims (Thursday) will provide more information on the extent of Hurricane Ida’s impact on the jobs market recovery.

Big Picture: With the chorus of Fed tapering talk permeating the financial newswires, it’s time to ask: what happens to rates after the first tapering event takes place?

Unlike 2013’s taper tantrum, financial markets have already priced in a portion of the Fed’s action toward reducing its asset purchases, as seen from the 10-year Treasury yield’s sustained move higher early this year. However, there’s still more to be had. The next move higher in Treasury yields should occur during the Fed’s first tapering moves as bond traders lose their ability to offload risk to the now increasingly absent, super-duper buyer of bonds: the Fed.

Demand for US Treasuries is and will remain strong, from both US and foreign buyers, and with the Fed’s increasing reluctance as a buyer, yields will likely rise, but modestly so. We’re expecting the 10-year Treasury to trade somewhere near the 1.50% handle at year’s end. The fly in the rose’? A volatile US dollar. Should the dollar appreciate or depreciate notably through the end of the year, it could cancel out the Fed’s waning impact on yields, muting any sustained rise.

Looking further out in time, waning fiscal policy – stimulus measures by the President and Congress – will likely have a much bigger impact on economic growth next year and beyond than the Fed, and not in a good way. More on that in future newsletters. 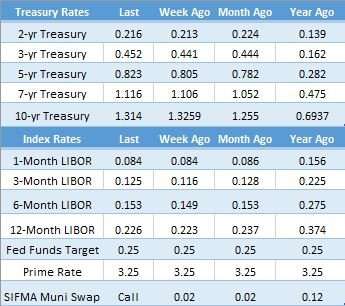 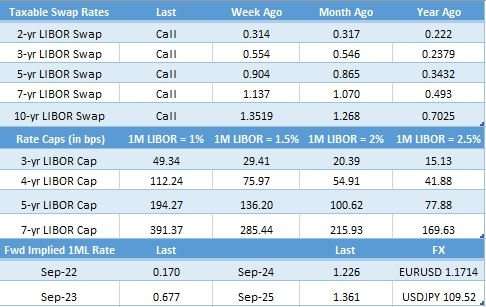 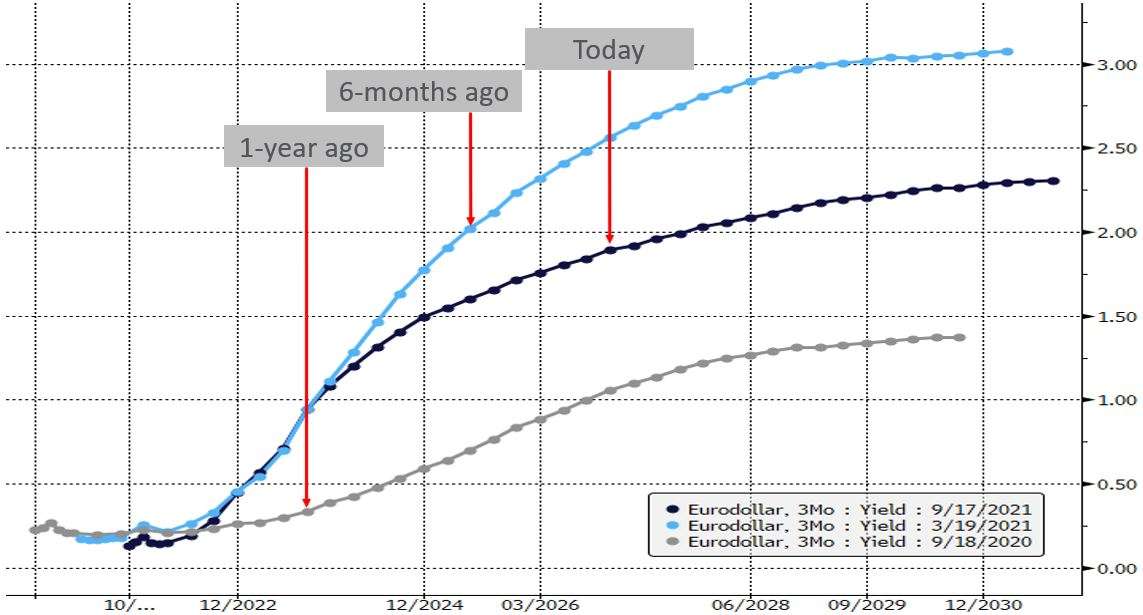 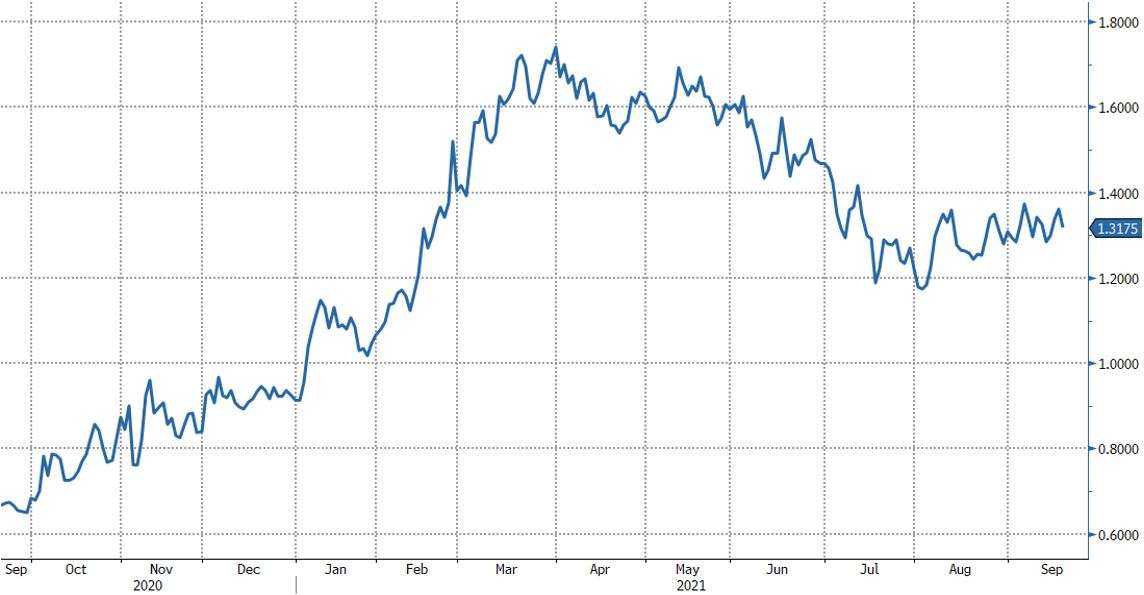