Last Week: Friday’s jobs data was the highlight of the week, coming in softer than expectations on all counts. However, the miss wasn’t too bad and the market quickly lifted Dec Fed hike expectations as it dashed any hope for September.

The 151K increase in August payrolls was just above what many see as the minimum 150K needed for expansion in the workforce and economic growth, and was seen as a “not-too-cold, not-too-hot, but just right” pace of job creation after an unsustainable 273K average for the prior two months and May’s paltry 28K. As importantly, wages in August logged their weakest year-over-year gain since March, marring what was widely being labelled the “Goldilocks” jobs report.

Most economists expect job creation to slow to match the expansion in the labor force, thus a slower pace of job creation wasn’t a surprise. However, the much needed boost in wages, labor force participation rates and the employment-to-population ratios were nowhere to be seen, causing most to push any expectations of a rate hike off to December at soonest.

This Week: It’s going to be a quiet week. There are only a handful of relevant economic reports due ahead of the Fed’s Sept 20-21 monetary policy meeting, and this week brings just one of them, Tuesday’s ISM non-manufacturing survey where we look for 55.3, a marginal slowing from Jul’s 55.5. The weak manufacturing reading will have the market looking to see if it spills over to the service sector. The Fed labor conditions index and final Market service PMI figures are also due.

Wednesday sees the Beige Book. Thursday`s initial jobless claims are expected to slip 5k to 258k. Consumer credit data is also due. Wholesale inventories on Friday are seen flat on the month, in line with an advance report already released on Aug 26. None of this week’s data will move markets, nor change the Fed’s assessment of the economy.

On the Federal Reserve speaker front, Williams is scheduled to speak on Tuesday, and Rosengren on Friday. No one knows what they’ll say, but we expect a reiteration of Yellen’s measured Jackson Hole speech: The Fed is eager to hike rates, but remains extremely cautious and doesn’t want to move prematurely.

Take-Away: If last week’s data showed anything, it was that the case for hiking rates is not urgent, and September is off the table. While the job creation situation is better now than it was when the Fed last hiked – December 2015 – the significantly slower pace of economic growth at present is offsetting it. There are no signs that a much-needed acceleration in growth is underway, thus the market still seems to be stuck in a holding pattern while it waits for what it still has as the best bet, a December hike. 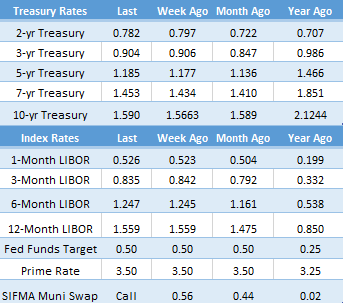 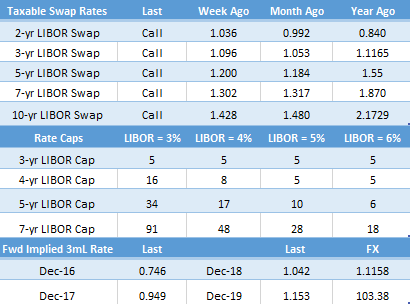 Common Hedging Pitfalls and How to Avoid Them
Scroll to top