Last Week: Interest rates were mixed, and global equities extended their record run as tensions between the US and Iran eased. The yield on the US 10-year Treasury note rose just two basis points from last Friday, to 1.82%, while 1- month LIBOR drifted lower by the same amount to 1.67%. The price of oil declined $4.50 to $59/bbl, the US Dollar strengthened, and Gold weakened. Treasury yield volatility fell to 3.72 – its lowest level since May of 2019 – from 4.36 a week ago.

Lukewarm jobs report serves as a reality check for optimists.  America’s jobs engine slowed beyond expectations in December, adding just 145K new jobs in the month – the least since May 2019 – as wages rose at their weakest annual pace since 2018, even as unemployment held at a half-century low of 3.5%. Our view: While the jobs data is consistent with our forecast for a gradual slowing of growth this year, the wage numbers suggest that the labor market isn’t as tight as the ultra-low unemployment rate indicates and is good enough for the Fed. As such, the Fed will likely stay on hold for the foreseeable future to insure against risks from trade-policy uncertainty and sluggish global growth, though tepid wage pressures will continue to stir the debate as to whether the economy has achieved full employment. Further weakness in wages could raise concerns about the durability of the record-long U.S. expansion, given consumer’s spending is the primary driver of growth. All told, last Friday’s jobs report showed that payroll employment rose for the tenth consecutive year, the longest such stretch in the 80 years the Bureau of Labor Statistics has collected employment figures.

Mideast crisis averted – for now. Despite Iran’s admission that it mistakenly shot down a commercial airliner in the wake of last Wednesday’s missile strike, markets no longer expect an escalation in the conflict between the US and Iran after one of the tensest weeks in their history. As such, safe-haven buying of Treasuries has subsided, leaving the 10-year yield at around 1.82%, the midpoint of its roughly 20-basis-point range this month. Earlier in the week, the Iraqi parliament passed a nonbinding resolution calling on the United States to leave Iraq, though Kurdish and Sunni lawmakers largely abstained from the vote. Also this week, Iran announced that it would no longer be bound by the Joint Comprehensive Plan of Action, aka the Iran nuclear deal. Our view: While the lack of casualties from Iran’s retaliatory strike allowed the White House to choose temporary de-escalation, multiple triggers could spark another cycle of escalation and drive Treasury yields suddenly lower as a result. These triggers include violence between Iran-allied militias and U.S. or allied forces in proxy theaters like Iraq, Syria, Afghanistan or Yemen and, over the longer term, Iran’s nuclear development. Ignore the issue at your peril.

Ex-Fed Chair Bernanke to markets: QE is here to stay. Ben Bernanke, who led the Fed from 2006 until 2014, used his deep academic research of the Great Depression to engineer a new monetary policy strategy to revive the economy in the wake of the 2008 financial crisis. Under Bernanke’s leadership, the Fed bought trillions of government securities and mortgage-backed assets to push down long-term interest rates after short-term rates got stuck at zero, an action the Fed called “quantitative easing” or simply “QE”. The Fed then led the market to understand that the central bank was going to keep rates “lower for longer,” and not raise them at the first sign of an upturn in growth. In a speech at the American Economic Association last week, the ex-Fed Chair said that the Fed should make unconventional tools, aka quantitative easing, a permanent part of the central bank’s arsenal. To add to the craziness (in our opinion) Bernanke recommended that the Fed should be more ambiguous about the subject of negative interest rates, believing that there are benefits to financial markets if investors believe the central bank might take that drastic step. What it means to you: It seems the current Fed is following Bernanke’s plan, after backing off Fed funds rate increases last year at the first sign on economic trouble, hence ensuring that rate will remain low historically for even longer.

What to Watch This Week: The coming week features the signing of the “phase one” U.S.-China trade deal and the expected beginning of President Donald Trump’s Senate impeachment trial. Both will garner great media attention, but they won’t move interest rates much.

That puts the spotlight on economic news, specifically key themes from the jobs report, namely cool inflation, manufacturing stagnation and diminished prospects for consumers under the data spotlight over the coming week. While important no doubt, even blowout readings of late in this type of data – like the recent strong showing from America’s services-sector – hasn’t really translated to notable, lasting moves in interest rates.

Even though concerns over the US growth outlook have mostly evaporated after the confirmation of the “phase-one” US-China trade deal, and it seems we’ve experienced peak trade-war anxiety, interest rates have reacted more forcefully to disappointing data rather than from positive data surprises. With it being increasingly unlikely that we’ll see a plethora of consistent, positive data surprises at this stage of the growth cycle, combined with a Fed firmly on hold, we’ll maintain  a state of play where rates stay within their well-worn ranges for the foreseeable future.

Take-Away: Last month’s tepid pace of job growth combined with the downward revision to hours worked and a weaker-than-expected increase in wages confirmed that consumers – the main driver of America’s economic growth at present – are now on a weaker footing.  However, not so weak that it sows doubt about America’s respectable but slowing growth prospects. The current state vindicates the Fed’s decision to trim interest rates last year and emboldens it to remain on hold.

For the short term, now that peak trade-war anxiety and boiling US-Iran tensions have eased, we expect rates to gravitate toward the higher end of their recent ranges but stop short of any sustained breakout in the absence of overtly positive economic data. 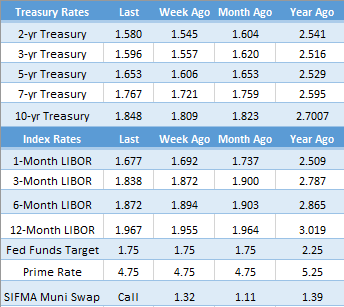 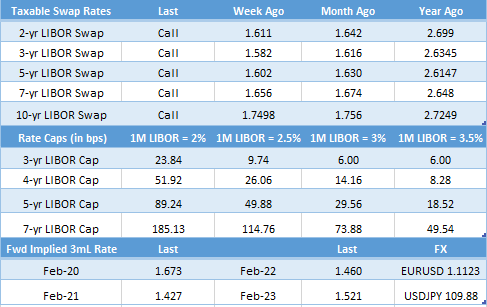