Last Week: US interest rates were mixed and equities fell for the week on concerns that a rise in US protectionism could intensify global trade tensions and stifle economic growth. Rising fears the Fed will hike four times in 2018, rather than three, added to the mix. The US 10-year Treasury note peaked at 2.8938% early in the week, finishing lower at 2.8424%. 1-month LIBOR continued its steady march higher, wrapping the week at 1.6905%, up from 1.6482% the week prior. Oil fell to $61.25 from $63 last week on rising US inventories, the US Dollar strengthened slightly while Gold fell. As measured by the Chicago Board Options Exchange Treasury Volatility Index (TYVIX), Treasury market volatility jumped to 4.92 from 4.84 a week ago.

Trump’s announcement of new tariffs rattled global markets. President Trump said last Thursday that he’d approve a 25% duty on imported steel and 10% on imported aluminum. Who cares, right? Wrong – financial markets fear the protectionist measures could result in retaliation from trading partners, specifically Canada and China, potentially disrupting the synchronized global economic growth we’re all enjoying. Additionally, the tariffs add gasoline to the inflation fire consuming financial markets, as tariffs will raise input costs for steel and aluminum-consuming industries in sectors such as autos and construction. Adding to the protectionist momentum, markets faced the possibility that leaving the White House soon will be highly-placed, market-friendly staffers who have been trying to restrain the president’s protectionist tendencies.

Jerome Powell, the new Fed Chair, made his official debut. Our new master made his first public remarks since taking office, testifying before the House Financial Services and Senate Banking committees. Markets interpreted Powell’s upbeat view on the economy as adding to the growing belief the Fed may hike rates four times in 2018 rather than the three hikes that Fed members forecast back in December.

Economic gauges pointed to solid growth while inflation pressures held steady. The pace of US manufacturing hit a 13-year high: The Institute for Supply Management’s manufacturing index hit its highest level since 2004, rising to 60.8 from 59.1. The data show a backlog of orders, suggesting a sustained period of strong manufacturing output in the months ahead. Adding to the feel-good news, the Conference Board’s consumer confidence index reached a 17-year high. While the markets have been quite concerned about rising inflation, inflation data from the US and the eurozone remains benign. The Fed’s preferred inflation measure, core personal consumption expenditures, held steady at 1.5% – still well below the Fed’s 2% target. Eurozone inflation fell for a third straight month in February, to 1.2%, well below the European Central Bank’s target near 2%.

What to Watch This Week: Its jobs week again and given the hot debate of whether the Fed will hike three of four times this year, this week’s read on the state of job creation and gains in wages could put it to bed once and for all. A solid jobs number above 200K and an upside surprise in average hourly earnings (aka wages), would add momentum to the Fed’s lean toward four hikes this year versus just three. We’re expecting 200K in new jobs (versus a 205K consensus), and a new, 4.0% low in the unemployment rate.

Take-Away: President Trump’s move to slap tariffs on steel and aluminum imports has reignited a Treasury yield tug-of-war of sorts, between those driving the 10-year Treasury yield higher on the belief in more Fed hikes, and those driving it lower as they seek a safe-haven on fears of trade retaliation and roiled global financial markets. Who will win? We won’t likely know for a few weeks, and the ultimate outcome will depend on the extent of the trade retaliation by the likes of Canada, Europe and China. In the meantime, increased volatility in interest rates is a certainty, which will only add to the cost of interest rate hedges as banks seek to protect themselves from any unexpected market move.

There is a second aspect to Trump’s trade tariffs – their impact on inflation. Should the tariffs actually be implemented, and if other nations respond in kind, they’d result in higher prices for some imported goods, adding momentum to inflation’s slow creep toward the Fed’s 2% target, and further, adding another facet for the Fed to consider as it ponders hiking four, rather than three times this year. If a full-blown, tit-for-tat trade war breaks out, US economic growth will slow and the whole three or four Fed rate hike debate will evaporate, putting a lid on the 10-year Treasury yield well below 3%, and slowing the steady ascent of 1-month LIBOR along with it. Should a trade war be averted, we’re doubtful the Fed will hike more than three times this year, and will opt to increase the pace of hikes in 2019 instead. 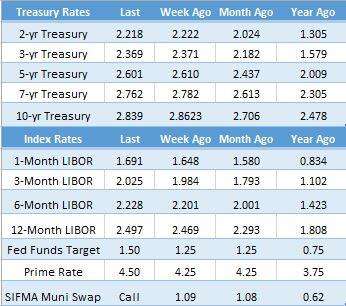 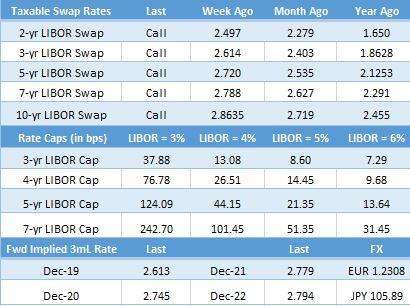 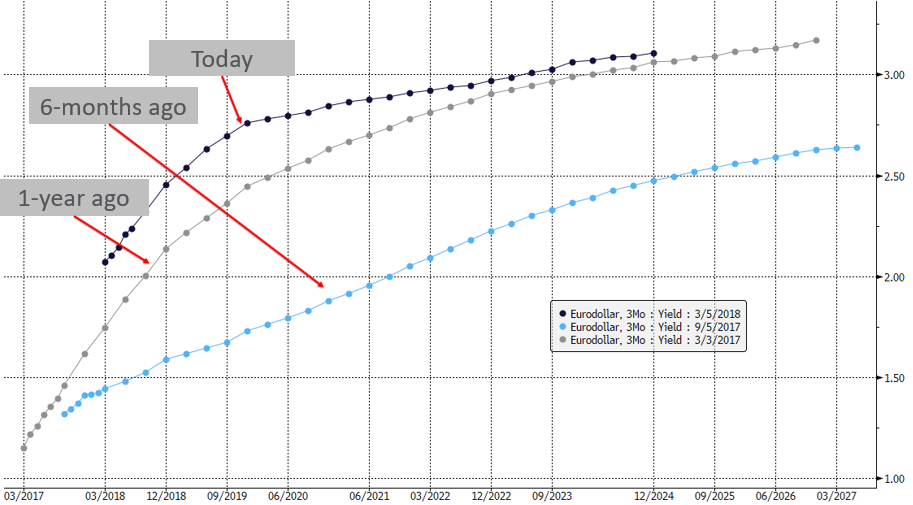