Last Week: Interest rates were mixed and Global equities dipped as geopolitical jitters intensified over rising tensions on the Korean peninsula and the possibility of a stronger US commitment to oust Syria’s Russian-backed leader Bashar al-Assad. Investors search for safety pushed the yield on the US 10-year Treasury note down to its lowest point of the year at 2.25% from 2.366% a week ago while 1-month LIBOR rose to .9944% from .9880% this time last week. Oil prices continued their rebound, Gold rallied while the US dollar fell. Market volatility, as measured by the Chicago Board Options Exchange Volatility index, jumped to 16 from 12.8 last week, a level not seen since late last year.

Yellen: Fed allowing economy to coast. Speaking at the University of Michigan, Fed chair Yellen said that due to the US’s economic health, the Fed is now shifting its focus, taking its foot off the accelerator and allowing the economy to “coast”, believing that a gradual path of interest rate increases can get us where we need to go.

Trump moderation in full swing. President Trump in sounding much more moderate lately, seemingly reversing course on multiple fronts during notable interviews last week. First, Trump said he may nominate US Federal Reserve Board chair Janet Yellen to a second term after saying last fall that she was “toast” and he would replace her at the end of her term. He also reversed his opposition to the US Export-Import Bank, which finances US exports. Additionally, the president shifted gears on NATO, saying the alliance is no longer obsolete because it has begun to fight terrorism. Finally, Trump said the United States will not label China a currency manipulator, thus breaking another campaign promise.

North Korean & Syrian tensions mount, driving Treasury yields lower. The North Korean regime threatened a nuclear strike in response to any US aggression as the US navy dispatched a carrier task force to the western Pacific in a show of force, while Chinese president Xi Jinping said that China is committed to the de-nuclearization of the Korean peninsula. Meanwhile, the US and other G7 nations continue to pressure Russia to abandon its support of Syria’s Bashar al-Assad in the wake of last week’s chemical weapons attack on Syrian rebels which led to a cruise missile strike on a Syrian airbase by US forces. Both events spurred investors into the safety of US Treasuries, driving the 10-year yield to multi-month lows.

This Week: There is a steady drip feed of US data on the calendar, though nothing likely to heavily impact thinking at the Fed. GDP for Q1 is becoming the dominant topic of discussion in financial markets, specifically if an expected weak performance will bleed into Q2 and influence the Fed’s path for rate hikes this year. For yet another year, Q1 GDP is poised to be much weaker than the underlying trend would suggest. While we’re expecting growth just above 1% for Q1, though many estimates are pointing to sub 1%, in-line with the recurring seasonally-driven low-growth economic performance of recent years, corroborated by the disappointing March jobs data released two weeks ago. For further clues on how Q2 GDP will shake out this time around, this week markets will focus on manufacturing surveys, home builder sentiment, housing starts and industrial production data where most are expected to post moderate declines.

Take-Away: We’re not worried about a lackluster Q1 for growth, and expect economic green shoots to prompt a rise to 2.3% by year end, up from the 2.0% posted at the end of 2016. Why? We’ve seen the pattern before: US growth lags in Q1 only to rebound markedly in the subsequent quarters. This occurred last year and the year before and it won’t be any different this time, as most of the segments of the economy – manufacturing, industrial output and job creation – are on firmer footing than they’ve been in the recent past. Should our view come to fruition, it will help keep the Fed on track for 2 more hikes this year.

For now, the dominant theme for interest rates is geopolitical risk, with Syria and North Korea looming large.  Any intensification of tensions in either venue will keep a lid on yields in the short-term. Secondly, the French election, with the first-round voting next weekend, also throws its shadow over the week. The market will still probably obsess over polls even while simultaneously doubting their accuracy given recent events – BREXIT and Trump’s election –  where polling proved inaccurate. 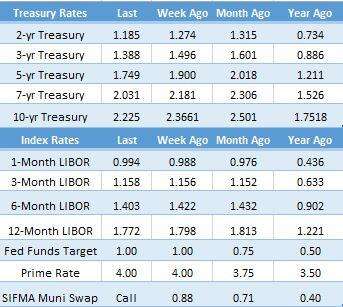 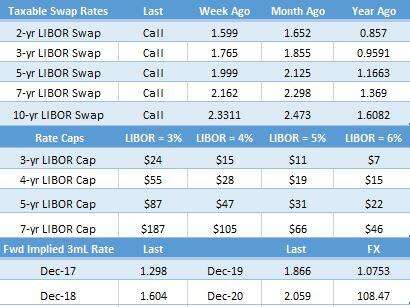 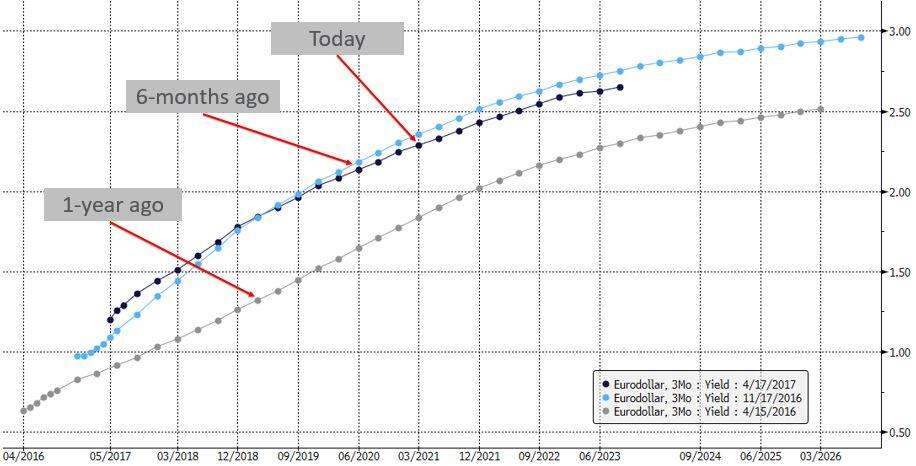