Last Week: Hopefully your holiday weekend was restful and sunny – DL would like to honor and thank our veterans past and present and their families for their sacrifice on behalf of the country. Interest rates remained in their ranges while equities rose as more regions of the world emerged from coronavirus lockdowns. Hope that a vaccine to guard against the virus could become available in the months ahead helped lift sentiment. The yield on the US 10-year Treasury note rose to 0.66% from 0.61% a week ago, while 1-month LIBOR rose very slightly to 0.174% from 0.168% this time last week. The price of a barrel of West Texas Intermediate crude oil rose $4 to $32.50, as the US Dollar and Gold both traded flat. Treasury yield volatility, a key driver of the cost of rate caps and swaptions, continued its slow decent, falling to 4.27 from 5.25 this time last week.

Easing lockdowns breathe signs of life into the economy. It increasingly appears that the worst of the economic crisis caused by the COVID-19 pandemic is behind us. Activity should steadily pick up from here, as many regions across the world are still in the early phases of reopening their economies.  In the US specifically, all 50 states have begun to reopen, to varying degrees. Localized gauges of increasing activity continued their upward trend throughout the week; map requests from Waze and Apple, requests for rides from Uber and Lyft, sales from the fast food chains, and home buyer demand from Redfin and Zillow all  show upticks in activity. On a broader scale, oil prices have rallied strongly as road and air traffic has begun to come back from the dead.  Adding to the momentum were hopes for a coronavirus vaccine as a US government-backed research effort appeared to bear fruit in early clinical trials.

Stubborn jobless claims slow to decline. As we have said for weeks now, the weekly data on the number of applications for jobless benefits (aka jobless claims) are the timeliest clues into the depth and duration of the economic pain. Last week’s print trended down as states gradually reopened their economies, falling to 2.44MM, 40,000 higher than the consensus. The prior week jobless claims were revised down to 2.69MM from 2.99MM.  All told, while encouraging, until the pace of claims slows dramatically, estimates of the extent of the economic contraction will rely more on guesses than observations, as consumers – the engine behind any economic recovery –  won’t begin spending en masse. Discretionary spending increased after the stimulus checks were received, however, a study by Envestnet Yodlee  found that 30% of the stimulus monies for income brackets up to $150,000 went into savings. It’s an indication households are uncertain about the future.

Powell pledges that the Fed’s bazooka is locked and loaded. To summarize his testimony before the Senate Banking Committee, the Fed Chair said the central bank will do whatever is necessary to promote economic recovery. The messaging from Powell of late has made it abundantly clear that the Fed is not on a neutral footing and is biased toward providing additional economic support. The Fed’s lending capacity recently expanded to $2.3 trillion in loans to support various non-financial businesses and state and local governments, establishing it as the lender of last resort. However, as massive as the Fed’s lending capacity is, it has only used roughly half of the funds allocated to the Treasury by the Coronavirus Aid, Relief, and Economic Security Act (CARES Act). The Fed’s ammunition stockpile still has room to expand to as much as $4.5 trillion, pending approval from the Treasury. Despite its massive firepower, Chair Powell and the Fed are expecting a less vigorous recovery and admitted that Fed stimulus alone is unlikely to be enough to ensure a vigorous rebound.

Fed meeting minutes reveal positive discussions about curve sculpting. Given the current and future deluge of new Treasury bonds being sold by the US Treasury to pay for all the recent economic stimulus, the supply of bonds may begin to exceed demand, spurring long term Treasury yields (the 10, 20, and 30 year paper) to rise. To counter this, the Fed could employ its curve sculpting, to keep long term rates low and encourage borrowing. In our previous versions of the DL Report, we’ve mentioned why the Fed’s possible efforts at sculpting the Treasury yield curve would have better results toward keeping long term rates low/boosting the economy than negative interest rates would. It seems the Fed is beginning to intimate the same belief, as evidenced in the discussions during the Fed’s April FOMC meeting, minutes of which were released last week, where Fed members considered curve sculpting as a more realistic option.

Also called “Yield Curve Control”, curve sculpting is an exercise where the Fed sets targets for various maturities on the Treasury yield curve in addition to one on its overnight benchmark, the Fed Funds rate, and buys or sells Treasuries as needed to hit each target. By doing so, it is believed that the Fed would purchase fewer Treasuries than it would under a traditional quantitative easing scenario. Either way, if curve sculpting is implemented, markets may try to test the Fed’s resolve, forcing the Fed to make massive Treasury purchases initially – driving term rates dramatically lower as a result – activity which would fade over time. It’s not as far-fetched as you may believe; curve sculpting was used by the Fed in the 1940’s and 1950’s, and it’s a tool the Bank of Japan has implemented successfully in recent years, and a mechanism that Fed officials had been discussing openly before the pandemic began. New to yield curves? For a primer check out The Yield Curve: What You’ve Always Wanted to Know but Were Afraid to Ask.

A first: The UK issued a negative yielding government bond. The UK Treasury issued a 3-year gilt with a negative yield for the first time in history last week. The UK now joins many other nations – France, Germany, Spain, Portugal, Sweden, the Netherlands, Switzerland, and Japan specifically – with negative yielding sovereign debt. The Bank of England Governor Andrew Bailey confirmed that negative interest rates are under active review as a stimulus tool, and that all economy-boosting options are on the table. Could it happen here in the US? Keep reading.

What to Watch This Week: Even though a piecemeal approach to reopening after the Covid-19 lockdown has begun in every state of the union, and while financial markets have started to reflect optimism that the recession won’t last past midyear, the economic data aren’t yet showing any compelling evidence that it will play out that way.

As such, we’re on the lookout for more green shoots of recovery to show up this week, specifically in Tuesday’s May consumer confidence data (particularly expectations for the future) and, on Thursday, April orders for durable goods – a leading driver of factory production. Thursday’s weekly jobless claims data remains the most useful indicator of the depth and duration of the recession, and also serves as one of the most critical leading indicators of the strength of the rebound. As of now, we are not seeing any signs of it from the hard data. However, should we take the data at face value?

At this point, the stock market is basically implying that the combined fiscal and monetary response to the pandemic will be enough to insulate household finances beyond a modest blip. The reality is likely to lie somewhere between that implicit forecast and the economic Armageddon implied by taking current economic data, and the ultra-low level of interest rates, at face value. The “force majeure” nature of the economic doldrums we’re living in means that as lock-downs ease, there will by definition be a higher level of economic activity. Will it be an immediate return to normalcy? No, but it’s not necessarily going to look like the Great Depression, either.

Big Picture: Negative interest rates showing up in the US will become increasingly unlikely as the volatility of interest rates continues to mellow and the economic outlook slowly improves. Given that 1) the Fed Funds rate is just above zero, 2) that the Fed will likely keep it near zero through at least mid-2021, 3) that rates are already in negative in Japan and Europe and the UK, it’s natural to believe the phenomenon could spread to the US.

Even though Fed funds futures and options on Eurodollar futures are pricing a chance that the Fed will push interest rates below zero, the activity in futures markets are really technical in nature (e.g. a hedging of tail risks related to those 0.00% floors we often see in loan agreements) and don’t reflect a broad belief in markets that short rates in the US will go negative. On top of it all, given that the Fed has gone out of its way on several occasions to state its opposition to negative rates, we would be very surprised if the Fed cuts rates below zero. If they go down that road, look for the Fed to adopt a curve sculpting mechanism instead. Regardless of the Fed’s actions in the future, it doesn’t mean Treasury yields (or swap rates for that matter) can’t be driven negative by the market. 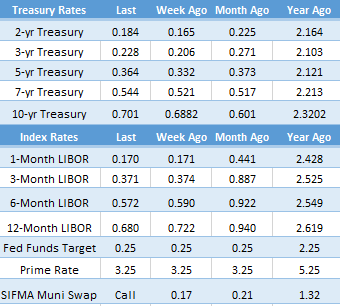 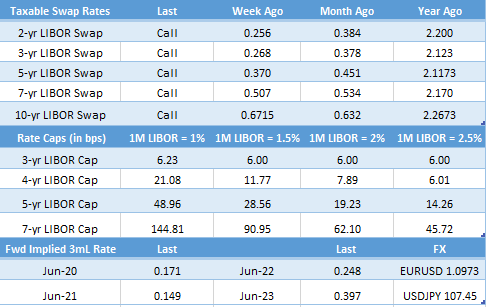 A Delay in LIBOR’s Sunset?
Scroll to top