Last Week: Interest rates and equities both edged slightly higher, regaining small portions of their recent descents. Yields on the US 10-year Treasury note rose 5 basis points to 3.21% before backing off somewhat by week’s end. 1-month LIBOR traded mostly flat, peaking at 2.29% before settling back to 2.28% where it started the week. Oil declined $1.50 to $69.80, while the US Dollar strengthened, and Gold traded flat. Treasury yield volatility, as measured by the Chicago Board Options Exchange Treasury Volatility Index (TYVIX), eased to 3.74 from 3.89 a week ago.

US data continues to point to a solid Q3. Last week’s data releases on Retail sales, Industrial production, the Leading Economic Index, and readings on the strength of the labor market all pointed to strong economic growth last month. The situation is likely to carry over into Q4, as strong consumer spending, a substantial inventory build, and an added boost from fiscal stimulus continue to drive the economy. The fly in the ointment? The Housing sector, which is lagging: Existing homes sales fell short of expectations and dropped 3.4% in September. Housing starts also came in slightly below consensus, declining 5.3% last month, much of which occurred in the volatile multifamily segment.

Fed expects to continue hiking rates. The minutes from last month’s Fed meeting showed that Chair Powell & Co. intend to continue hiking rates gradually for the foreseeable future. The Fed’s policy setting committee debated whether it will eventually need to raise rates to the point where monetary policy becomes restrictive. We’re still expecting three to four more 0.25% hikes, once every quarter, before the Fed pauses in mid to late 2019 as the sugar-high effects of tax reform fade and the world of higher rates begin to bite most sectors of the economy. Will the recent and potentially ongoing equity market volatility, jump in rates, and cooling of the housing market cause the Fed to blink? Nope. Outside of a stock, bond and housing market crash, the Fed doesn’t tailor its planned hikes around asset prices, and it likely views the recent moderation in prices as welcome, as they may help extend America’s growth run even further.

Trump ratcheted up the pressure on Fed. In a television interview, President Trump called the Fed the biggest threat to his presidency because it’s raising interest rates too fast despite low inflation. Trump also blamed the recent market volatility on the Fed, saying that while America’s central bank is independent, he’s not blaming Fed chairman Jerome Powell but is disappointed with his decisions. Any ongoing Fed criticism by the President will only embolden the Fed to keep hiking further, as it seeks to prove its political independence.

America’s budget deficit ballooned to $779 billion. The final figures are in after the close of the US fiscal year on September 30, and they are a deep shade of red, as the federal government spent $779 billion more than it took in despite record-high tax revenues. Reacting to the second-highest deficit on record, President Trump ordered cabinet officials to trim their 2020 budgets by 5%. Are our record budget deficits sustainable? The world certainly won’t keep loaning us money forever. For a deep dive on that question, check this out: The Triffin Dilemma.

The US started the clock on official trade talks with the EU, UK and Japan. The Office of the United States Trade Representative announced it aims to address both tariff and non-tariff barriers and achieving fairer, more balanced trade in a new round of comprehensive trade talks. Should the US secure updated trade agreements with these allies, it will be a long, bumpy road to get there, but it is expected that they will unite in opposition to China’s trade practices.

Meanwhile, more signs emerged that confirm China’s growth is slowing. Per official government data, China’s economy downshifted slightly in the third quarter, slowing to a 6.5% annual pace, compared with a 6.7% rate in Q2, and the slowest since 2009. However, private sector growth estimates suggest the slowdown has been much more severe, with the economy expanding at only a 4% pace. In response, the Chinese government is expected to ramp up stimulus efforts – again – in reaction to the economic slowdown, a U-turn from its recent efforts to de-lever its debt-laden economy.

What to Watch This Week:  There’s a handful of important data releases on tap in the days ahead, all of which will give markets a clearer sense of the economic momentum going into the end of the year.

The first print on Q3 GDP this Friday will be the market’s focus of the week, and pretty much everyone is expecting a solid number near 3.0%, notably lower/slower than the 4.2% pace seen in Q2. Don’t despair however; while this scaling back of US growth is expected to persist into Q4 and 2019, any growth slowdown is seen as a settling of sorts into a more sustainable pace as the boost from tax reform fades. A solid Q3 GDP reading will also confirm that the benefits of tax reform continue to overshadow any economic drag from ongoing trade tensions.

Despite the economy settling into a groove, we don’t expect any real change in trajectory in job creation, the unemployment rate, or in moderate inflation pressures. As the Fed continues its hiking path into mid 2019, we do see an even further deceleration in growth in 2020, and with it, a Fed that’s less likely to respond forcefully to a relatively mild inflation overshoot.

Other important economic readings in the days ahead include new homes sales on Wednesday and Durable Goods on Thursday, neither of which will alter the markets sentiment toward where interest rates are headed.

Take-Away: Last week’s release of minutes from the September Fed meeting showed – once again – that the Fed’s words have invoked more fear into the financial markets than their actions. As the September Fed meeting approached, market expectations were very high for a September 0.25% hike. The odds of a rate hike in December, and further rate hikes in 2019, were also high. What has changed since the meeting is that the Fed’s rhetoric has largely become more hawkish, and justifiably so given that it has essentially fulfilled its maximum employment goal and met its inflation target. As a result, fears the Fed will hike rates faster, longer and to an ultimately higher level have increased. 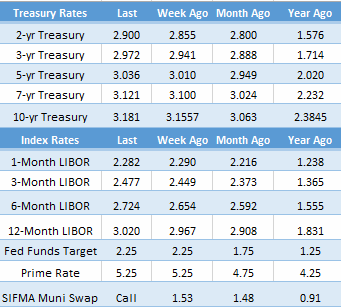 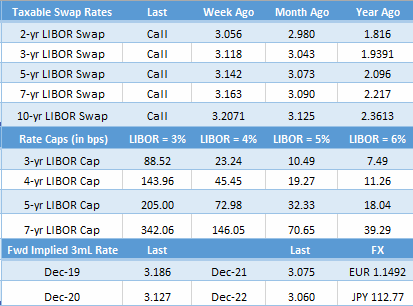 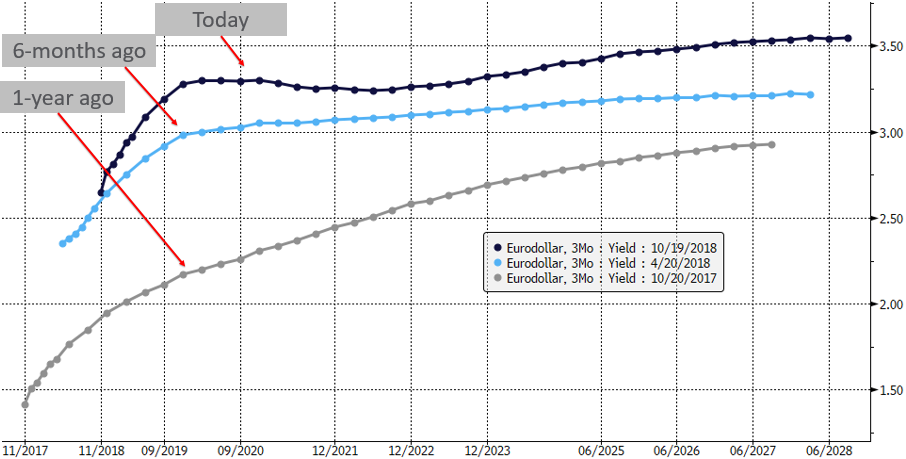 Click here for more DL Reports
Will the Fed Blink in Response to the Recent Market Tumult? The Fed is no Longer Your Sugar Daddy
Scroll to top