Last Week: Interest rates moved lower and equities traded within their ranges as markets continued to assess the damage from the COVID-19 pandemic via a steady stream of dire economic data. The yield on the US 10-year Treasury note drifted lower throughout the week, settling at 0.61% as 1-month LIBOR followed suit, continuing its slow but steady decline to 0.30%. Crude oil fell to its lowest level since 1986 at the start of the week before nearly doubling as the week progressed. The US Dollar and Gold both weakened. Treasury yield volatility, a key driver of the cost of rate caps and swaptions, continued to calm, finishing the week at 4.74. It was as high as 16.0 in mid-March.

Economic growth plunged in Q1. The global lockdowns meant to slow the spread of the coronavirus took a heavy toll on Q1 economic growth across the globe. In the eurozone, growth declined 3.8% – around 15%, annualized – from the prior quarter. Gross domestic product in the US, which measures changes on an annualized basis, fell at a lesser 4.8%, though the US economic shutdown unfolded somewhat later in March than those in Europe. Regardless, the drop was still the deepest quarterly decline since the last quarter of 2008 and occurred sooner and at a greater magnitude than most anticipated.

Bad as the declines in GDP are, the worst is yet to come. As dire economic data continues to pour in, the outlook is becoming increasingly clearer; the decline in growth in Q2 will be shocking, with economic growth careening from the jarring 4.8% in Q1 to an unbelievable -35% contraction in Q2, resulting in a recession that is the quickest and most severe since WWII. We expect the unemployment rate to peak at 20% in May and eventually decline to 8% by year-end. For comparison, unemployment after the Great Recession in 2009 topped-out at 10%. The rebound? Well, it will hinge on the effectiveness of the virus containment measures, which in turn will determine how quickly various sectors of the economy can fully reopen. As such, the vigor of the rebound will be constrained by a slow, staged unlocking of containment measures and slow-to-resolve damage to consumer finances, leaving growth deeply negative for the year. In the meantime, markets continue to look past the dire forecasts despite growing signs that a return to economic and societal normalcy is not likely for at least a couple of quarters as the search for a coronavirus vaccine and treatments continues.

Other jarring data showed the consumer is in trouble. Given that 70% or so of all US economic activity is driven by the consumer, the first gauges of  financial health during the pandemic have been front and center. March’s personal income and spending report painted a grim picture of the state of the consumer at the start of the Covid-19 crisis. Both income and spending measures plunged precipitously. The savings rate spiked to the highest level since the 1980s and spending plunged at the fastest rate ever, spanning across categories except for food and health-care products. While there is no doubt that relaxing quarantine measures will prod consumers to begin spending anew in the coming months, it will be muted until the low levels of consumer confidence, fragile incomes and weakening job prospects turn around. Thinking that things will get back to normal soon? Think again – this dynamic will limit the magnitude of a rebound in consumer spending and economic growth overall.

Elsewhere, the suddenly all-import weekly jobless claims data showed that recent record-high filings for unemployment benefits continued to abate, but at a slower pace. Jobless claims declined to 3.8 million in the week ended April 25 from 4.4 million the week prior, a fourth consecutive weekly drop from a peak of nearly 6.9 million at the end of March. Even with the drop in recent weeks, claims are and will continue to be extraordinarily high; a total of about 30 million claims have been filed over just a six-week period. With some states moving ahead with plans for a staged reopening, jobless claims in those states should stabilize at a faster pace and provide a template for what to expect at the national level, assuming the re-opening experiments are moderately successful and don’t spark a second wave of infections and illness.

America’s factory activity declined by the most ever in March. The March to April production declines were the broadest on record, and job cuts proved widest since 1949. Like many other sectors of America’s economy, the data show that the abrupt factory shutdowns and disrupted supply chains in these early months of the Covid-19 shock are inflicting great damage. While these could be remedied fairly quickly should re-opening experiments prove successful, the damage has already been done. As such, consumer’s disrupted spending habits and confidence in the future will take much longer to heal, stunting the recovery.

Central banks stand ready to do even more.  The Fed, the European Central Bank (ECB) and the Bank of Japan (BOJ) all met last week and modified their monetary policies in order to counteract the negative economic effects of the lockdowns. The message from all three was basically the same: Almost everything is on the table, and the era of both unconventional monetary policy accommodation and massive Fed market intervention will not be ending anytime soon. What is next from the world’s central banks? While none are likely to lower rates further, with the ECB and BOJ already in negative territory and the Fed at its effective lower bound, they stand ready to expanded upon programs to improve market liquidity and keep credit flowing to households and businesses. For the Fed specifically, it will keep rates at the zero-bound until unemployment has returned to the 4-5% range – something which will not occur until 2022-23. Other unconventional policy measures will be unwound sooner, but the Fed is totally focused on doing more, not retreating. The Fed values flexibility above all else right now, as it continually adjusts its stimulus programs in order to navigate the rapidly changing economic and market developments.

What to Watch this Week: Given that its historically the most impactful piece of economic data for interest rates, it’s all about the April jobs report this week, set for release Friday morning. The report will show that the damage to America’s job-creation ability is simply breathtaking, with somewhere between 18-20 million jobs lost in the month of April, and the unemployment rate likely jumping to at least an eye-watering 15%. It will be the most jobs lost in a single month since World War II, with levels of unemployment not seen since the Great Depression.

Looking ahead, the details of the jobs report will allow markets to refine estimates of economic damage in the first half of 2020. While the April report is expected to be the worst ever, job reports in the coming months should show a steady improvement in the number of jobs lost, but not enough to stop the unemployment rate from approaching 20% in the next month or two. The key defining dynamic everyone will look for in future jobs reports will be the timing of the shift from net-layoffs to net-hiring, as it will imply a broader economic inflection point toward brighter days ahead.  However, job growth may come too late for households to afford mortgage payments, rents and car payments. In the meantime, expect more consumer-focused bailouts.

Big Picture: The steady drip of horrifying economic data is confirming the dismal economic outlook, validating the need for the Fed’s and the government’s unconventional stimulus programs while relegating the 10-year Treasury yield to trading in a tight range below 0.70% in recent weeks, after rebounding from an all-time low of 0.31% in March. Even as the US Treasury embarks on massive bond auctions to pay for it all, risking driving rates up in the process,  the Fed’s vows to hold rates near zero for the foreseeable future and buy hundreds of billions of dollars of Treasuries to keep markets calm, will keep yields at record lows. Looming economic data could even drive them lower than they are now.

Over the long haul, the emergence of deflation will become a real threat in mid-2020 and beyond as the collapse in oil prices, a strong dollar, spare industrial capacity, a dearth of new jobs, and weak commodity prices, all conspire to keep prices low and headed lower. Inflation, despite the government’s alphabet soup of stimulus packages, will be a non-issue throughout 2020 and beyond. The Fed will keep rates at the zero bound through all of 2021 but will unwind most of its stimulative programs before mid-2022, after which we’ll see the first post-pandemic rate hike.

Curious how the near-term outlook will impact your financing/interest rate hedging strategy? Are you wrestling with an interest rate swap or interest rate cap in these uncertain times and not sure how to handle it? Do not rely on the view of your bank; level the playing field with a highly experienced, time-tested independent advisor like Derivative Logic. 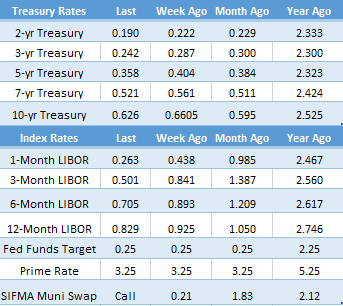 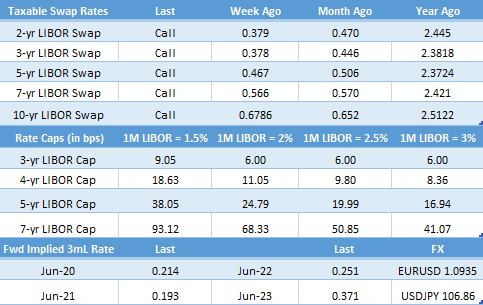