What You Missed: Long-term interest rates were mostly unchanged, and equities advanced on the week as markets reacted to more details about the Federal Reserve’s plan to taper its securities purchases amid new signals of higher inflation. The yield on the US 10-year Treasury note declined to 1.57% from 1.61% a week ago while, short-term rates, like 1-month LIBOR, SOFR and BSBY, fell slightly.  The price of a barrel of West Texas Intermediate crude oil rose to $82.15 from $79.80 last Friday, as the US Dollar weakened, and Gold strengthened. Treasury yield volatility, a key driver of rate caps, swaptions and other option-liked interest rate derivatives, was little changed.

Inflation remained elevated in September – does it matter? The Consumer Price Index (CPI), one of the Fed’s favorite inflation gauges, rose 5.4% YoY in September, up from August’s 5.3%, as global supply chains remain disrupted. Headline CPI has now been above 5% YoY for five months in a row. It’s been more than three decades since that happened, the longest such gap in the history of the official data. Food, shelter, and energy price increases all contributed to the uptick in the index. Fun fact: The recent spike in the cost of living resulted in the US Social Security Administration announcing that monthly payouts to retirees and other beneficiaries will rise 5.9% in 2022, the largest such adjustment in 40 years.

Our take: While inflation pressures are likely to ease once logistical logjams resulting from the pandemic are unraveled, what worries markets is that the process is taking longer than expected, with no timely resolution in view. Despite the persistent rise in prices, and the financial media’s incessant coverage of them, what the Fed is really watching is inflation expectations – when and if households and firms consciously alter their behaviors in response to current and expected price dynamics. So far, it seems that inflation expectations haven’t changed (see the section on retail sales below), giving the Fed more freedom to respond than the financial news media would like to allow.

What caught our eye in the CPI data, and in the Fed meeting minutes also released last week, were signals that rapid growth in housing prices over the past year are flashing brighter on the Fed’s inflation radar screen. The minutes showed that Fed members flagged shelter costs in their consumer price basket as a key indicator to watch, likely as a sign that inflation is becoming less transitory and more persistent. Supporting the Fed’s heightened inflation concern was detail in September’s CPI data showing that rents, which typically lag housing prices by months, drove the bulk of the acceleration in core inflation last month. With housing prices up 20% over the past year, the pressure on rents will likely continue in future CPI releases. Hence, housing costs – not the price of gasoline or used cars – may turn out to be the most decisive factor in the debate over whether inflation is “transitory” as the Fed claims, or not.

Retail Sales data imply a turbulent holiday season. The data, which measures America’s economic health via its growth engine – consumer’s appetite for spending –  advanced 0.7% in September, much stronger than the 0.2% drop estimated by the consensus. The prior month was revised to a 0.9% gain, up from 0.7%.

Our take: The data show that consumers are shrugging off persistently high inflation, implying that inflation expectations – again, what the Fed is really watching – didn’t change in September. However, high prices and persistent product shortages into the holidays threaten to restrain consumers’ glee into year-end. The missing ingredient to make it all better? Clearing port backlogs. Given labor shortages up and down supply chains, that’s maybe a stretch…or maybe not.

Fed gave the world a peek into its tapering plans. Further, on the Fed meeting minutes released last week, the Fed outlined its plan to taper its purchases of Treasuries by $10 billion per month and mortgaged-backed securities by $5 billion, winding down the asset purchase program by next summer. Of course, the Fed could adjust the pace of the moderation of its purchases if economic developments differ substantially from what they expect. Given that everyone expects the Fed to kick off tapering by the end of the year – and since tapering doesn’t equate to hiking interest rates – the news had little impact on Treasury yields, LIBOR or SOFR. We suspect we’ll see tapering for sure in December but possibly as early as next month, during the Fed’s next meeting on November 2-3rd.

The updated quarterly projections contained in the FOMC meeting minutes showed that Fed officials are now evenly split on whether it will hike rates as soon as next year. We suspect that if a hike did come next year, it would be in Q4. Interest rate markets don’t agree with us though, as they’re currently pricing in an almost one-in-two chance that the Fed will pull the trigger on its first quarter-point hike in June 2022, right about the same time that the Fed taper is ending.

What it means for interest rates. We’re all programmed to watch the 10-year Treasury yield for hints on how markets are pricing a taper. If you do that, you’ll miss the real signal, which is the movements in the “belly” of the Treasury yield curve – 2 to 5-year Treasury yields. These shorter-term yields are more impacted by inflation spooks and closely anchored to the Fed funds rate, the rate the Fed targets when it hikes or cuts. They rise as the CPI sparks inflation fears (they have). If you also believe that inflation is “transitory” though, then the back end of the Treasury yield curve – the 10 and 30-year Treasury yields – will remain relatively static or fall (they haven’t). Taken together, a flattening yield curve, where short term (2-5 year) rates rise faster and more than long-term (10-30 year) rates, implies that the markets believe that Fed tapering is around the corner and inflation pressures are elevated, but will dissipate in the months to come. This dynamic is occurring right now in interest rate markets, despite all the media hoopla to the contrary.

What to Watch This Week: The coming week’s data releases will provide clues on one of the biggest issues the Fed faces as it walks the high-wire of monetary policy: how high housing prices will rise and how serious the Fed should take them.

The billion-dollar question: How much longer will housing prices climb? The answer depends on supply, a word that was mentioned 25 times in the Fed’s September meeting minutes, and likely will be given prominent mention in the Fed Beige Book (Wednesday).

Big Picture: Consumer prices are rising. Bottlenecks are adding to inflation. The Fed is about to taper. Long-term Treasury yields should rise, but they’ve traded in a range. What gives? With all of the Fed-buying of Treasuries, perhaps Treasury yields are acting like meme stocks, in that they’ve lost their economic messaging superpower. More likely, perhaps inflation measures, like the CPI, are lagging indicators. Just because the CPI came out on the high end doesn’t mean it will persist and drive long-term Treasury yields markedly higher. The inflation spike could just be a one-off inflation shock as economies of the world ebb and flow in the post-Covid recovery.

Supply chain issues – one of the creators of the inflation boogey man at present – will eventually be resolved. Given their temporary nature, and their unlikeliness to get notably worse, the current high prices we’re all seeing are just that, “high” rather than a signal that they’ll soon rise to unnatural levels. In other words, the fear-mongers warning of an inflation panic could be living in a speculative reality. The rate of increase in container shipping prices – via the WCI Composite Container Freight Index –  has slowed for two weeks in a row, the first time since April 2021. Something to keep an eye on. 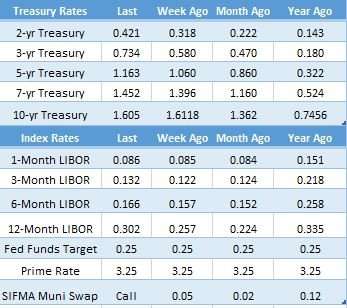 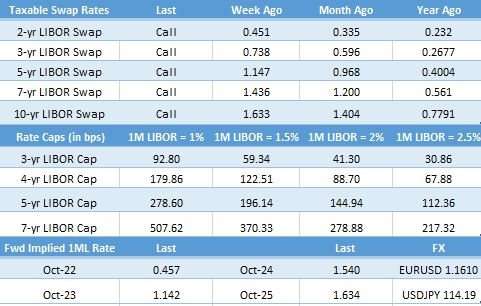 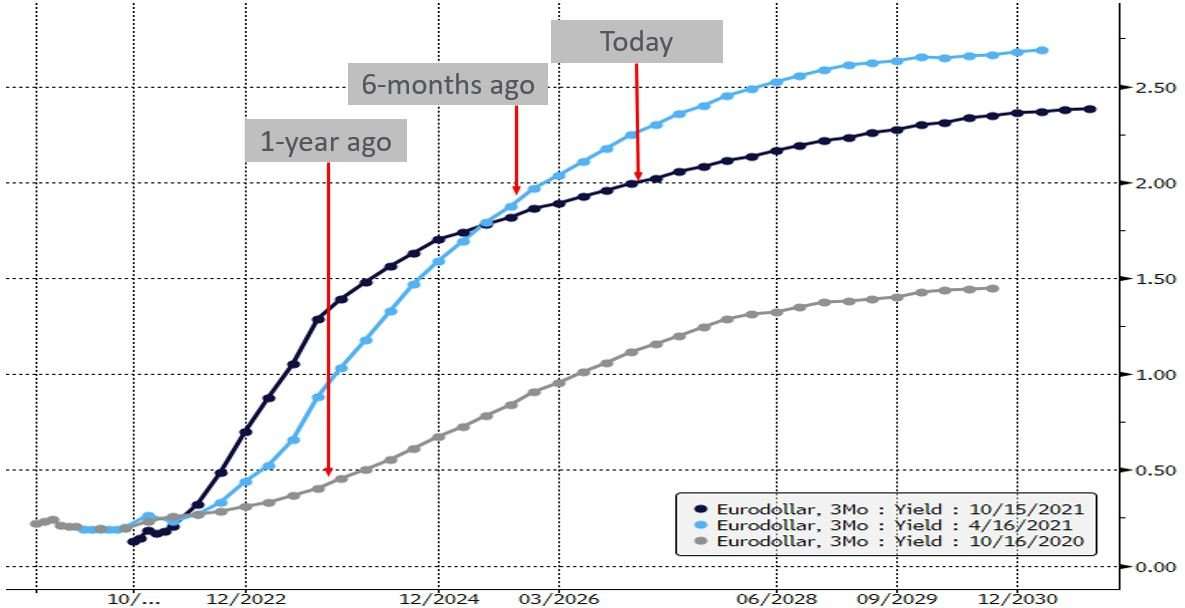 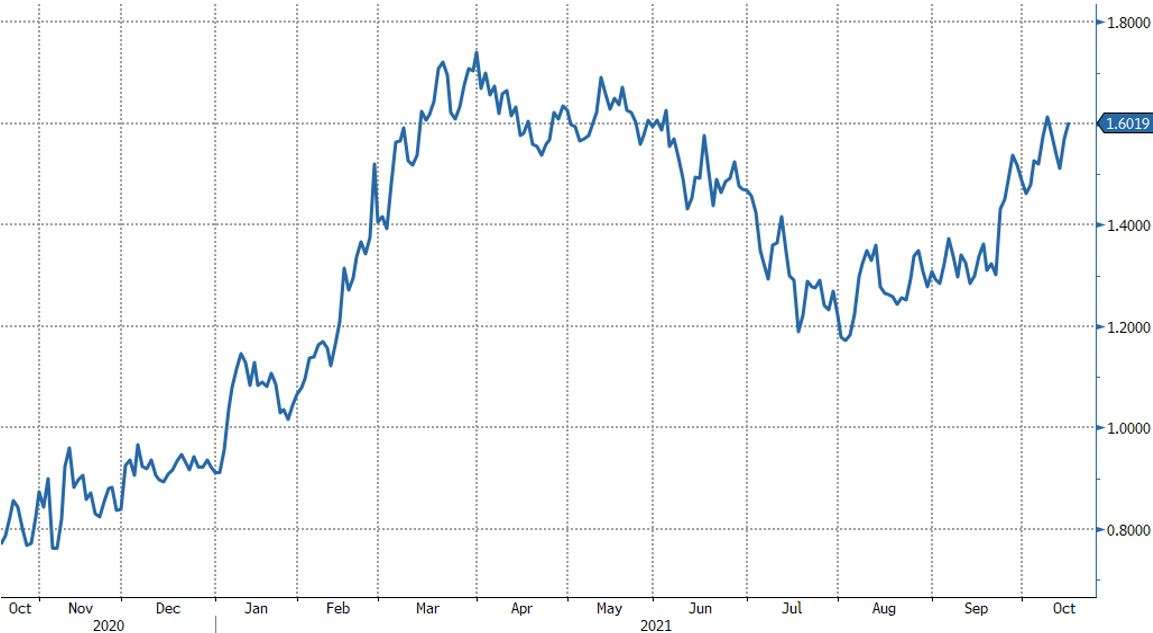 How To Hedge Rising Rate Risk
Scroll to top