How To Hedge Rising Rate Risk

What You Missed: Long-term interest rates rose as equities retested record highs on the back of strength in third-quarter earnings results and renewed fears of inflation. The yield on the benchmark 10-year US Treasury note increased to 1.64% from 1.58%, as shorter-term Treasury yields, like the 2-year and 5-year maturity continued their noteworthy ascent for a second week. The price of a barrel of West Texas Intermediate crude oil rose to $82.68 from $82.20, while the US Dollar weakened, and Gold strengthened. Treasury yield volatility, a key driver of the cost of option-based interest rate derivatives like rate caps and swaptions, ended the week about where it started, near highs last seen in March 2021.

“Transitory” inflation debate rages anew – does it really imply that rate hikes are around the corner? It’s getting tough to be in the transitory inflation camp these days. High and rising oil prices are driving up energy costs just as shortages and supply bottlenecks are proving more persistent. Housing costs just posted their fastest gains in more than a decade.

Some members of the Fed’s rate setting committee recently steepened their rate-hike paths. Financial markets have followed suit: the swaps market is pricing around a 70% chance that the Fed will hike interest rates 0.25% at its June 2022 policy meeting, with another 0.25% hike priced in near the end of 2022. It’s the most aggressive rate hike expectations we’ve seen in years and is a big change from what markets expected about a month ago, when the first hike wasn’t expected until sometime in 2023.

Our take: The market’s rate hike expectations are overblown. We’ve seen this movie before. In short, markets routinely over-react, only to temper their rate hike expectations later. We expect the same ending this time around. While inflationary pressures certainly look to be more persistent than many once thought, we doubt it will result in two 0.25% Fed rate hikes next year and expect just one 0.25% hike sometime in Q4 2022.

Yes, supply-chain disruptions are boosting prices for a wide range of goods and services and will continue to do so into 2022, but these supply-chain constraints will eventually ease. Expecting two 0.25% rate hikes next year is likely too aggressive, especially since the number of Americans employed is still millions below where it was just prior to the pandemic and August and September reports show that job growth is slowing.

Fed Chair Powell agrees with us. In a speech last week, the Fed Chair sounded a note of heightened concern over persistently high inflation and made clear that the Fed will take the first step to battle it – tapering its asset purchases –  soon but will remain patient on raising interest rates. At present, in an effort to keep interest rates low and the appetite for credit flowing, the Fed is buying $120 billion of Treasuries and mortgage-backed securities a month. The looming reduction in its pace of purchases (aka “tapering”) will formally begin it’s exit from the “throw everything at it” measures it rolled out in 2020 to shield the economy from the effects of the coronavirus.

Whatever your opinion, there is no doubt that the Fed’s language is steadily shifting to imply a world of less stimulus and higher rates. For some perspective, globally, the Fed is a bit of a laggard. Other major central banks from New Zealand to Canada to Norway are already tightening monetary policy. The U.K. is likely to be the first to hike interest rates (see below); only the European Central Bank remains in a more complacent position than the Fed. As we’ve been saying for weeks now, long-term rates will likely maintain their recent gains and slowly creep higher into year end, which leads to…

How to hedge against rising rates? We’re seeing a surge of inquiries from our clients recently, all running a bit more scared of late given the building consensus that both short- and long-term interest rates are on the rise. We’ve obviously written about the topic repeatedly over the years and thought that it would be a good idea to dust off some of our more popular posts. While no two borrowers are alike, and therefore require bespoke solutions tailored to their specific situation, the following will give you a general sense of what’s possible:

The Bank of England hinted at imminent rate raise. Bank of England (BoE) Governor Andrew Bailey sent a fresh signal that the British central bank is gearing up to raise interest rates for the first time since the onset of the coronavirus crisis as inflation risks mount. Bailey said he continued to believe that the recent jump in inflation would be temporary but that a surge in energy prices would push it higher and make its climb last longer, raising the risk of higher inflation expectations. Investors are speculating that the BoE might become the first of the world’s biggest central banks to raise rates, either later this year or early in 2022.

Why you should care: We live in a global economy. Actions by central banks of large, developed countries to reduce stimulus/hike interest rates only adds momentum toward the Fed to do the same. However, until the European Central Bank also stages a rate hike, pressure on the Fed to do the same will remain subdued.

Housing data painted a mixed picture. US Homebuilding unexpectedly fell in September and permits dropped to a one-year low amid acute shortages of raw materials and labor. However, the National Association of Realtors said that sales of existing homes increased 7% in September, to an eight-month high. Elsewhere, demand for US single-family rental homes rose 9.3% in August YoY, up from a 2.2% YoY increase in August 2020. For the first time since before the pandemic hit, all major metropolitan housing markets showed positive rent growth. Miami led the way with a 21% gain, followed by Phoenix at 19% and Las Vegas at 15%.

What to Watch This Week: With the prices of goods and services that we all use every day on the rise, markets and the Fed are on high alert for any signals that show that business and individuals are altering their consumption patterns, slowing the economy.

Any slowing of economic activity in Q3 (evidenced in GDP data this Thursday; durable goods, Wednesday) will have been expected and won’t provide new information to sway the Fed’s taper decision. New pandemic lows in initial jobless claims (Thursday) would imply improvement in the jobs market.

The Fed’s preferred price and wage inflation indicators – core PCE inflation and the employment-cost index (both Friday) – will likely show a less alarming pace of increase. September’s employment-cost index will likely suggest that the faster pickup in wages isn’t close to sparking a “wage-
price” spiral. Elsewhere, and to mix the inflation picture up a bit, house prices (pending home sales, Thursday; Case-Shiller index, Tuesday) will imply that the increase in shelter prices will persist. The consumer sentiment index (Friday) will likely show that higher energy prices are a top concern of consumers.

Big Picture: Tired of the incessant commentary about inflation? Us too. To cut through the noise we have a handy dandy yardstick – a barometer of truth if you will – as to whether the inflation threat is real or not: the spread between 2-and 5-year Treasury bond yields. If we are going to have either prolonged inflation or a threat of deflation (lower prices due to lower available credit, and/or increased productivity), this spread should ‘predict’ those outcomes by declining or even going negative.

A warning. It’s a little wonky. But we know there are many of you out there that will dig it.

Here is what the gauge (in white) has done over the past three business cycles, compared with the Fed Funds rate – the rate the Fed moves when it hikes or cuts (in pink): 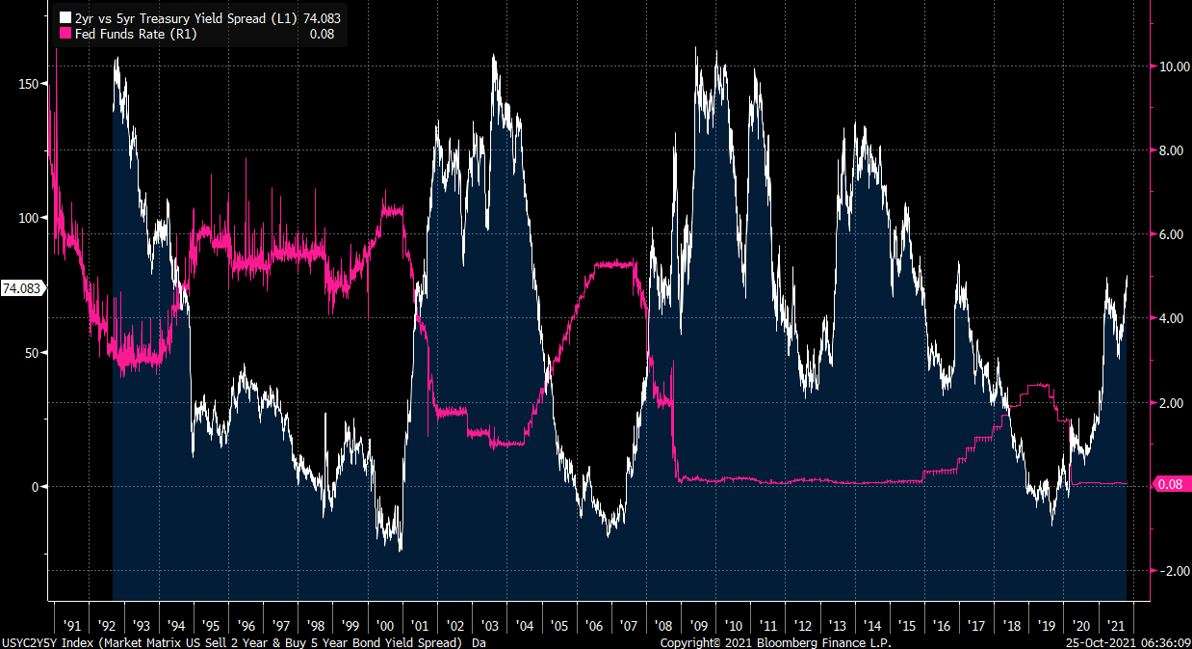 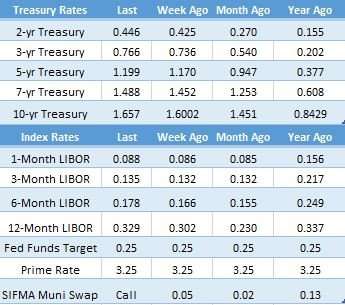 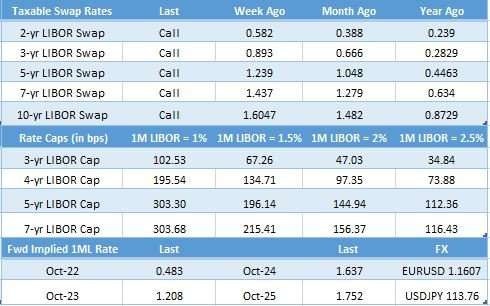 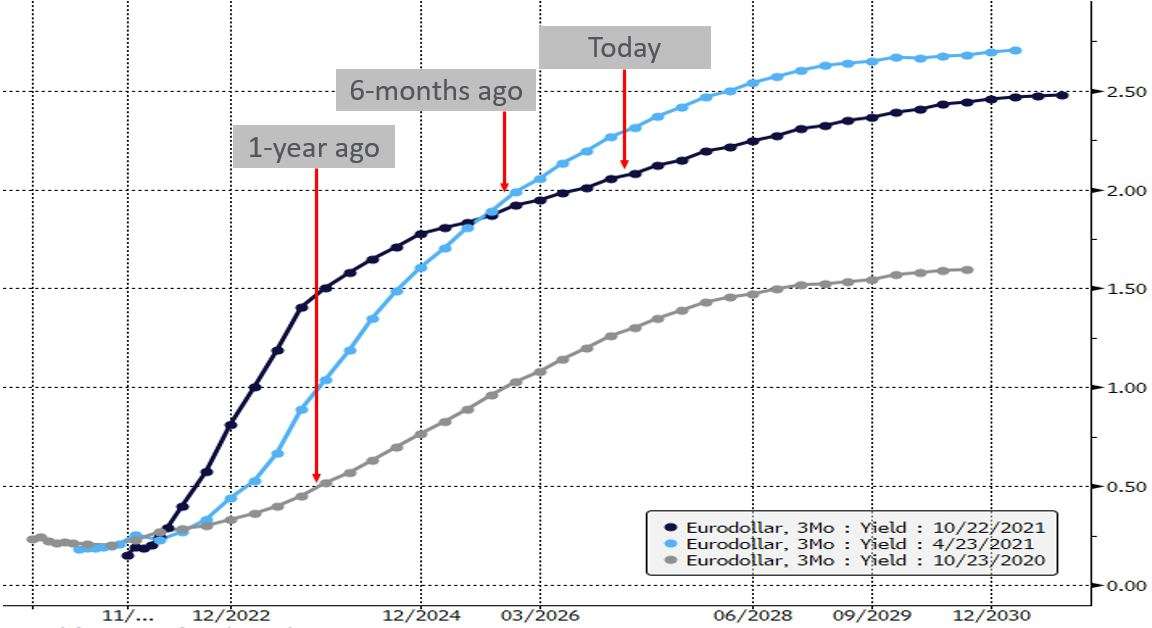 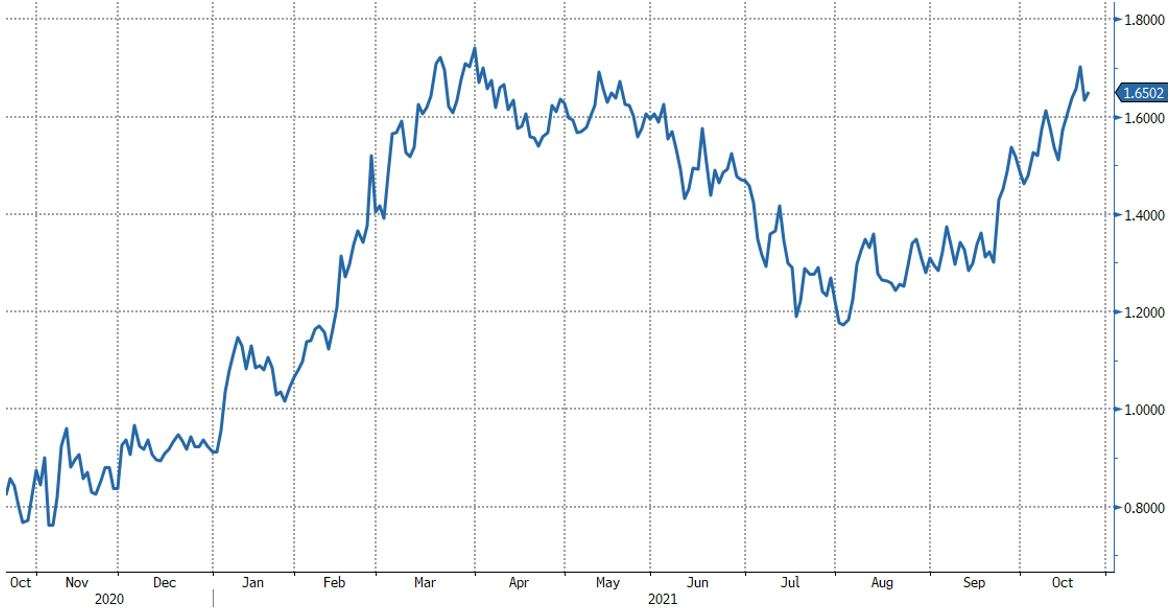