Is The Fed Getting Aggressive?

What You Missed: Short and long-term interest rates posted a steady rise and equities declined in the as the Fed hinted it might ease off the stimulus gas pedal more aggressively. The yield on the US 10-year Treasury note spiked to 1.79% from 1.50%, matching its 2021 high, as investors assessed the Fed’s more hawkish stance. The price of a barrel of West Texas Intermediate crude oil increased to $79.15 from $75.50 while the US Dollar and Gold both weakened. Treasury yield volatility, a key but hidden driver of the cost of rate caps and other option-based interest rate hedges like swaptions, fell steadily through the week but remained elevated.

December meeting minutes provided insight into the Fed taking a more aggressive stance than what the market had anticipated. At its December meeting, Fed officials discussed plans to cut the amount of bonds it is holding, with members saying that a reduction in the balance sheet will likely start sometime after the central bank starts raising interest rates, according to minutes released Wednesday. While officials did not determine when the Fed will start rolling off the nearly $8.3 trillion in bonds it is holding, statements out of the meeting indicated that process could start in 2022, possibly in the next several months, which is earlier than expected. Officials said they foresee up to three, 0.25% rate increases in 2022, as well as another three hikes in 2023 and two more the year after that. The market currently expects the central bank to pull the trigger on the first 0.25% hike as soon as March.

Our take: Broadly speaking, the minutes showed that the Fed seems to have checked the boxes on what’s needed for it to comfortably begin hiking interest rates. The first box to check is an economy at full employment. “Several” Fed members indicated that they felt we’re there. With a current unemployment rate at 3.9%, that’s a tough point to argue against (keep reading for more detail on jobs). Box one, check.

The second box to check is on the threat of high and rising prices, aka inflation. The meeting minutes cited rising housing costs and rents, wage growth and supply-chain bottlenecks as key reasons for the recent upward revision to the Fed’s inflation forecasts. The former two factors tend to be persistent and had been featured in even some of the more anti-hike Fed members’ speeches as indicators to watch for signs of less transitory inflation. The Fed felt that the persistence of inflation over the last couple of months justified the removal of the word “transitory” to describe inflation in their post-meeting policy statement. Box two, check.

The third box to check is that the Omicron variant won’t send all of us back into lockdown, via rising infection, hospitalizations, and deaths, derailing the economic recovery. The Fed meeting minutes cited that “several” participants noted they do not see the omicron variant “fundamentally altering the path of economic recovery.” This implies that the Fed is likely to look through the temporary hit to activity that we expect to see in economic data for December and January. Box three, check.

Finally, the meeting minutes presented a compelling argument for the Fed to begin unwinding its massive, $8.3 trillion balance sheet shortly after the first rate hike. In comparison to 2017, the last time the Fed tried to unload its massive holdings of Treasury bonds onto bond markets, meeting participants highlighted that this time around economic conditions are stronger, inflation is greater, and the balance sheet is bigger as a percentage of GDP. That’s a green light to begin a slow balance sheet unwind if we’ve ever heard one.

What’s it all mean for interest rates? A quick review of how the Fed controls interest rates is in order. The Fed Funds rate – the rate the Fed raises or cuts  – is an overnight interest rate. Therefore, the Fed has great control over short -term interest rates, like LIBOR, SOFR and the 2-year Treasury yield; as it hikes, these rates will rise in lockstep.

What the Fed doesn’t have great control over is long-term interest rates, like 5, 10 and 30-year Treasury yields. If it wants to move these rates around, all the Fed can do is influence them through indirect actions and hope they have the desired impact. The best way to do that in the current environment is through the sale, aka “unwind” of its Treasury bond holdings, raising long-term rates in the process (e.g., a big seller of an asset drives the price of that asset down. In the case of bonds, as prices move down, yields rise). The timing and extent of how the Fed chooses to wind down its balance sheet is the trillion-dollar, unanswerable question, but after last week, the stars are aligning.

All told, the minutes of the Fed’s December meeting showed the Fed members are coalescing around the view the economy is ready for a broad removal of monetary stimulus, and the omicron variant is unlikely to slow it down. Short-term rates will rise further, and long-term rates will do the same, just later and not as much. While everyone should prepare for a 0.25% rate hike in March, how high will rates rise this year? For that, check out our Annual Rates Forecast.

Jobs data helped pave the road for a hike. Amid a surge in coronavirus infections, America’s jobs engine added far fewer jobs than expected in December. Nonfarm payrolls grew by a measly 199k (422k were expected) while the unemployment rate fell to 3.9% (vs 4.2% in the prior month and 4.1% expected). November jobs were revised up to 249k from 210k, following a trend of upward revisions last year. Growth in average hourly earnings (aka wages) decelerated (4.7%, versus 5.1% prior), but upward revisions showed that wages are well above what was expected. Though high inflation is undoubtedly squeezing household budgets, particularly on the low end of the pay spectrum, when aggregating employment, hours, and earnings, wage gains amount to 9.9%, handily outpacing CPI inflation of around 7%.

Our take: Despite the disappointment in the headline jobs data, if one peels back the onion, it’s stronger than it looks at first glance. With the unemployment rate, at 3.9%, now below the median Fed committee member’s estimate of the long-run “neutral” rate, with wages growing briskly, households’ financial cushions dwindling amid the seemingly tame Omicron threat, last week’s jobs data report helps to gel our belief that the Fed will hike sooner than later.

What to Watch This Week: Following a jobs report that showed the jobs market is likely already at maximum employment, the December Consumer Price Index (Wednesday) – expected to show inflation exceeding 7% – will only add to the pressure on the Fed to begin rate hikes at its March meeting and kick off its balance sheet unwind campaign shortly thereafter.

An Omicron-induced growth hit is one factor that could stall the Feds hiking plans. December retail sales (Friday), the Fed’s Beige Book (Wednesday), and University of Michigan consumer sentiment (Friday) will offer the first indication of omicron’s economic impact.

If the Fed is leaning toward a March rate hike, policymakers will begin to signal that intention ahead of the January 26th Fed monetary policy meeting, giving markets plenty of time to prepare.

Big Picture: While markets are laser focused on the possible timing and extent of future Fed rate hikes, it’s prudent to take a peek at what’s happening with the LIBOR transition to SOFR.

Most versions of the London Interbank Offered Rate (LIBOR) – with the notable exception of three-month U.S. dollar Libor – are no longer officially being published. It’s the beginning of the end of LIBOR’s decades-long reign as the preeminent tool of the financial system, more than a decade after bank manipulation was first alleged and regulators began to formulate a plan to replace it. For regulators, it’s celebration time. For interest rate derivative traders, the outlook remains muddy, as the painful slog of integrating replacements for LIBOR goes on.

While most of you have probably ignored LIBOR’s ongoing demise (we can tell from all the last-minute questions we’re getting), we feel it’s prudent to offer you a resource to get you up to speed quickly: our SOFR Cheat Sheet. While it’s far from comprehensive, it will give you the cursory information needed at present, and at the very least, make you sound smart in meetings.

If you wish to keep avoiding the topic, know this: Beginning this month, anyone seeking to trade a LIBOR-indexed derivative (e.g., a rate cap, interest rate swap, swaption) with a bank will need to document whether it’s hedging a legacy contract or qualifies as a mitigating risk.

While Japanese, European, Swiss and British investors will have straightforward replacements to LIBOR, the US remains in a contest over which replacement index, the Secured Overnight Financing Rate (SOFR), Bloomberg’s Short-Term Bank Yield Index (BSBY) or AMERIBOR, is favored. To add to the confusion is how SOFR will be calculated.  1M Term SOFR, compounded in arrears, simple, and compounded in advance? Pick your flavor of SOFR.

From 50,000 feet, the transition is going smoothly, with some dangers lurking around every corner, specifically lackluster liquidity in LIBOR markets, cash and derivatives, which can directly impact the cost of any LIBOR indexed rate caps for those die-hards that just can’t let go of LIBOR. Some questions were getting routinely are:

The transition away from LIBOR has many implications, some of them potentially costly for both a borrower and lender. Need a quick but real understanding of how a world without LIBOR impacts your business? Contact Us for a deep dive. 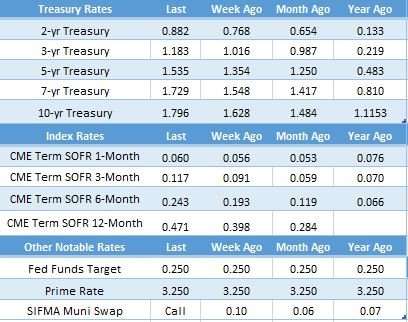 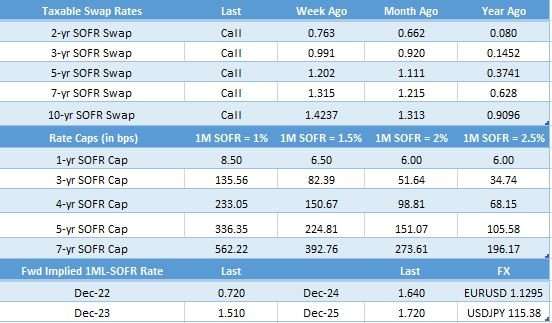 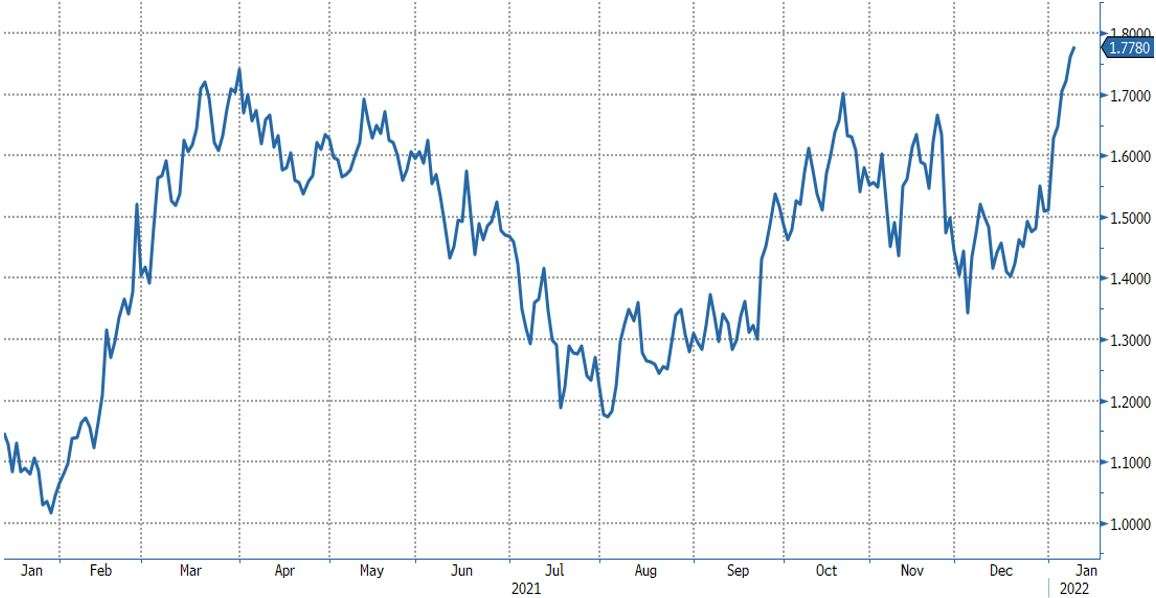 Will the Fed Hike as Much as Markets Believe?
Scroll to top