Jobs A Gauge For How Far Fed Goes 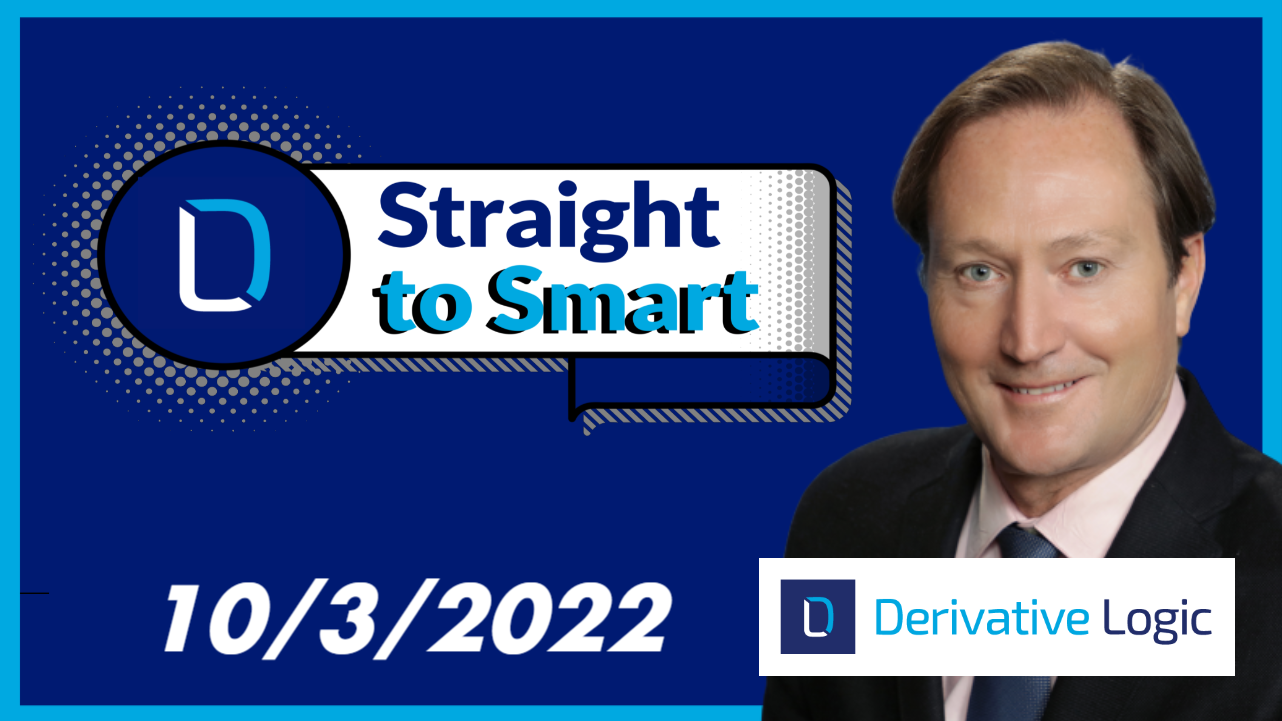 Yields across nearly the entire Treasury curve fell slightly last week, after a historic sell-off in British markets prompted investors to pare back their Fed rate hike expectations, betting that building global turmoil would rein in rate hikes to a less extreme trajectory.

For the week, the 2-, 5-, and 10-year US Treasury yields shed a respective 6, 12 and 9 bps, with only the 20 and 30-year maturities rising, adding only 3 bps each. The pullback reflects bubbling doubt that the Fed will need to continue to hike rates as aggressively in order to smother inflation, and it indicates that a peak in short-term rates may be in for the next couple of weeks. However, barring a 2008-style, Lehman moment 2.0, we suspect that the Fed won’t be dissuaded so easily.

Elsewhere, the price of a barrel of West Texas Intermediate crude oil rose $1.50 to $80.50, as the US Dollar weakened from 20-year highs and Gold strengthened. The US 2-year vs. 10-year Treasury yield curve wrapped the week at -0.42%, easing back from its most inverted level since 2000. Pro-tip: To learn more about what inverted yield curves mean, click here.

3-month (CME) Term SOFR, a useful gauge of hedging costs, increased ~4 bps last week to 3.60%, a new high for the three-year old index. The implied yield on the 3m SOFR futures contract for 1-year out (Sept ‘23) fell `32 bps from this time last week to 4.15%.  The Mar ’23 futures contract continues to have the highest implied yield for the 3-month SOFR index at 4.35%, implying that the bond market continues to expect that 3-month SOFR will peak in the next 6-months – along with the Fed Funds rate –  followed by a gradual decline over the next three years as the Fed eases.

Interest rate volatility, a key driver of the cost of rate caps, soared close to its 2020, COVID-induced high but backed off somewhat as the week concluded.

Unrelenting inflation pressures in the UK have put Britain’s central bank, the Bank of England, on a hiking path, endangering economic growth, and deterring the vast flow of foreign capital the UK needs to fund its current account deficit. This leaves UK assets – bonds, domestic stocks, and its currency  – more exposed to economic shocks than they’ve been in decades.

Queue the UK government to save the day, right? Wrong. Kwasi Kwarteng, the UK’s Chancellor of the Exchequer, threw out the macro-economic rule book by creating an unfunded “mini-budget” containing a series of tax cuts worth GBP45 billion, which also includes subsidies for household energy bills, in hopes of keeping UK economic growth at 2.5% annually. But wait a minute, don’t tax cuts help to drive demand for goods and services higher, rather than quell it as is needed at a time of high inflation? Yes, exactly. The move seems completely contradictory to what UK’s central bank is trying to achieve with inflation via rate hikes.

UK financial markets revolted as a result, now believing that the Bank of England will have to raise interest rates to nearly 6% next year to blunt the inflationary effect of the “mini budget”, increasing the odds of a longer and deeper UK recession than previously expected. For some perspective, the UK’s 2-year swap rate rose nearly 100 bps since the Sept 23rd budget announcement, with the 5-year swap rate rising a similar amount. Those are huge moves over the span of a week, and would typically be seen in an emerging market, not a mature economy like the UK. Eventually the Bank of England had to step into markets to quell the disruption, easing UK bond yields off their highs and bringing the British pound back from the precipice.

For comparison, a country like Japan could manage this dilemma, given its huge net lender asset position, and current account surplus. Not the UK however, as it is reliant on net foreign inflows of capital to fund their large budget deficits. The UK’s twin deficit (current account + budget) scenario now sits at roughly GBP 250 billion – a huge amount of capital that the UK must find each and every year. This is all fine in normal economic times, but when growth is weak and macro-economic volatility is elevated, it’s a problematic situation. The event-triggered safe haven trade fueled a strengthening of the US Dollar, upward pressure on US Treasury yields and an easing of Fed rate hike expectations.

The core personal consumption expenditures price index (core PCE deflator), a key inflation gauge for the Fed,  rose 4.9% in August versus a year ago from an upwardly revised 4.7% in July. Core PCE jumped 0.6% from the month before. The monthly pace of price rises implies a 7% annualized inflation pace, more than three times the Fed’s 2% inflation target. The news tells us that the Fed will keep its foot firmly on the brakes – via a sequence of sizable rate hikes – amid a slowing economy, adding to recession risks. Personal income rose 0.3% in August while personal spending rose 0.4%, implying a weaker consumer base, which is single-handedly responsible for roughly 70% of US economic output. While a weaker consumer would seemingly allow the Fed to ease off the brakes somewhat, the rising core PCE reading overwhelms for now, likely keeping the Fed firmly on the hiking path.

Revisions to GDP Data Show That the Fed Must do More to Quell Inflation.

US GDP data revisions for the previous five years revealed some scary news: Contrary to recent belief, the economy was more overheated, and inflation was higher throughout last year, implying that the Fed will need to do even more to smother inflation. While we’ll spare you the boring details, just realize that this dynamic, combined with Hurricane Ian add inflation-stoking effects to the economy.  For example, unbeknownst to many,  granular phosphate fertilizer is produced in large quantities in Florida and is utilized by farmers both locally and internationally. A spike in fertilizer costs will increase farming expenses, which will likely trickle down to grocery store shelves. Food costs in August were up 11.4% year-over-year, even before the storm.

What to Watch This Week

Financial markets are once again speculating that the Fed won’t be able to hike the Fed Funds rate to the terminal, 4.6% predicted in the most recent dot plot. This time, concerns over the UK’s financial stability are to blame. Markets currently predict the Fed Funds rate will peak at 4.47% next March, that’s 22 bps lower than the 4.69% May 2023 peak seen this time last week.

Last week’s global financial turmoil demonstrated a real possibility that problems in Europe could slow the global economy this year, but that won’t be enough to cause the Fed to back off its planned rate hikes. As the global financial crisis of 2008 demonstrated, safe-haven capital flows into the US often drive down long-term Treasury yields (demand for the safety of Treasury bonds drives prices of those bonds up, and their yields down) – a dynamic the Fed wants to avoid as it seeks positive real yields across the Treasury yield curve. As such, it’s hard to imagine that the Fed will postpone its rate-hike plans in the absence of something as catastrophic as a Lehman moment 2.0.

Recent economic data suggests that the Fed should keep applying pressure via more rate hikes. GDP revisions imply that America’s economy was more overheated than initially believed and requires the Fed to orchestrate either a more abrupt growth slowdown or a longer period of sub-par growth to quell inflation.

Keep your eyes on the jobs market (ADP, Weds.; nonfarm payrolls, Fri.), as its resilience will be the Fed’s deciding factor on just how further it needs to hike and how quickly. As long as the jobs market holds up, the Fed will keep hiking. More stories from big businesses about hiring restrictions or layoffs are emerging, and the number of people working part-time for financial reasons is rising. However, with unfilled job openings at historically high levels (JOLTS, Tues.), it seems easy for recently laid-off workers to find new jobs (jobless claims, Thurs. ). This dynamic, coupled with falling productivity, will keep upward pressure on wages in the near term, and inflation stubbornly high along with them. Thus, even in the face of a weakening global economy, the Fed will keep hiking as long as the jobs market is solid. However, will the Fed ultimately be able to hike to the point where annual inflation falls to the Fed’s 2% target? We doubt it, and suspect that the Fed will eventaully have to get comfortbale with annual inflation in the 3-5% range or risk cratering the economy.

In the meantime, expect the Fed to continue to shout from the rooftops that inflation must come down, and that it will stay the course on rate hikes. Also expect the Fed to say a lot less about the actual pace of rate hikes, giving it optionality to back track from the 75-bps cadence of hikes it has set recently.

Recent warnings from Apple on iPhone shipments, the collapse in the auto sector, a 20+ year high in fixed mortgage rates, and the cratering of pending home sales all tell you that the Fed’s hikes are working their way through the economy at lightning speed and are likely to show up in unpredictable ways. It’s a recipe that begs for flexibility on the Fed’s part, and we suspect we’ll see more of that flexibility show up in the Fed’s words, but not actions, as the year comes to a close. 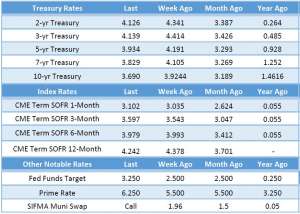 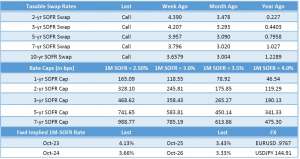 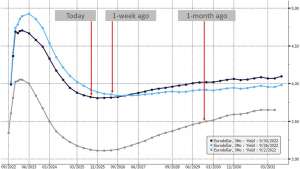 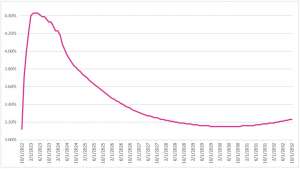 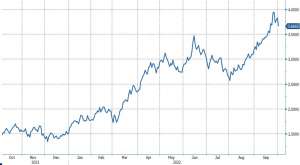 Fed Tuning Out Calls For A Pivot
Scroll to top