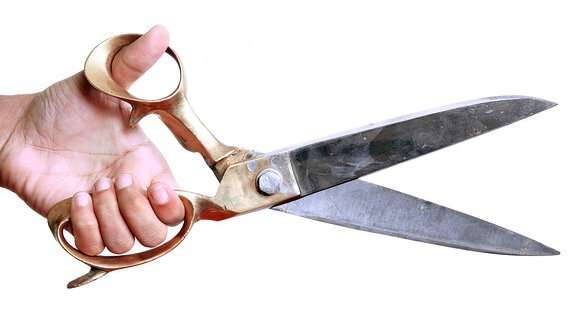 Last Week: Interest rates traded a bit lower and equities were slightly lower on the week, with markets awaiting news from the ongoing G20 summit in Japan. Yields on the US 10-year Treasury note dipped 6 basis points to 2.00% as 1-month LIBOR fell slightly to 2.3980% from a high of 2.4041%. Oil added $2 to $59.40 amid tensions in the Persian Gulf, while the US Dollar strengthened, and Gold weakened. Treasury yield volatility fell to 4.70 from 5.05 this time last week.

US declared Trade War Truce. The most significant outcome of the much-anticipated G20 meeting in Osaka, Japan was President Trump’s declaration of a temporary trade-war truce with China’s President Xi, as we expected. The President stated that he would hold off indefinitely on tariffs planned for an additional $300 billion in Chinese imports while allowing U.S. companies to continue to do some business with Huawei Technologies Co., one of China’s prominent firms, essentially the Apple computer of China. Most importantly, the White House has yet to reveal details of Trump’s arrangement with Xi, leaving uncertainty about how the two countries will proceed. While any progress on the trade front is welcomed, the devil is in the details, and China hasn’t yet made any conciliatory gestures in return. While the truce makes for some nice headlines, it doesn’t actually change much; we are still far from a negotiated deal and a fresh tariff threat is always lurking 280 characters away. Bottom line: The mere trade war “truce” reduces pressure on the Fed to cut rates in July. Any decision to cut rates will be driven by the incoming economic data, which we expect will continue to mildly deteriorate.

Fed went out of its way to upend rate cut expectations. While markets increased their bets on rate cuts during the most recent Fed monetary policy meeting, Fed officials spent the week leaning against those expectations. Fed Chair Powell said the decision to cut rates hinged on “whether” uncertainties will continue to weigh on the outlook. He also warned that the Fed should not “overreact to any individual data point or short-term swing in sentiment,” cooling speculation that the Fed will cut rates 50 basis points at its meeting in July. Other Fed officials whom have recently leaned toward rate cuts dampened their enthusiasm for them last week, framing any need for a cut as merely “insurance.”

The Trump-Powell soap opera continues. President Trump reiterated that he believes he has the legal authority to remove Jerome Powell as Chairman of the Fed and demote him to the Board of Governors. In a speech on Tuesday, Powell said that short-term political pressure can be damaging to the central bank’s independence. The Fed Chair reiterated that the Fed will closely monitor incoming data and that it will act appropriately, while acknowledging that the economic outlook had worsened since May. Should Fed Chair Powell ultimately be demoted by the President, we seriously doubt it will have any real impact on Fed monetary policy. The greater damage would be to the world’s view of the Fed’s political independence, something global financial markets literally count on as a beacon of levelheaded action.

Markets expect more economic damage from the US-China trade war. As Q2 earnings season approaches, analysts are forecasting a second straight decline in S&P 500 earnings per share. Q1 earnings contracted 0.6%, and analysts have projected a 2.6% decline in Q2. It would be the first back-to-back decline since late 2015 through early 2016. Downward revisions are especially prevalent among US-based multinationals, given the headwinds and supply chain disruptions stemming from the US-China trade war. Are you noticing a pattern in the themes that are moving markets of late? It’s mostly politics, plain and simple. Due to politics’ unpredictable nature, expect volatility, in one form or another, to rear its head at any moment.

US Q1 economic growth held steady. The third and final reading of US Q1 GDP was unrevised at a 3.1% annual growth rate. Q2 growth is expected to slow from the first quarter’s pace, with forecasts clustering between 1.5% and 2%.

What to Watch this Week: Taking the spotlight this week is Friday’s release of jobs data for the month of June. Widely viewed as the most significant piece of economic data for interest rates, the data will measure the degree to which hiring managers are becoming more conservative in response to heightened economic uncertainty, and greatly impact the odds of a rate cut at the Fed’s next policy-setting meeting on July 31st.

While unemployment is around a five-decade low, should America’s jobs engine sputter for a second consecutive month – remember that only 75K new jobs were created in May – a Fed rate cut in July will become highly likely, and the debate will then shift quickly to the size of the cut. A sub-100K increase in new jobs will compel the Fed to cut sooner, rather than later.

On the flip side, a strong showing of new jobs, 100K+, will prompt markets to rein in their rate cutting bets and ponder if the Fed will wait until September to cut after receiving more information on the state of the economy. For some perspective, the 12-month trailing average of job gains slipped from 234k in January to 196k in May, and the three-month trailing average of 151k suggests further deceleration in job creation is on the way.

We expect that a subdued 125K in new jobs were created in June, an outcome which would confirm that the labor market is losing momentum but is still strong enough for the Fed to push any rate cut to its September meeting.

Other important, but less dramatic events worth your attention include a wave of global manufacturing data which is likely to show that industry remains gripped by recession, prompting questions about if and when the manufacturing sector’s pain will shift to the service sector of the economy.

Take-Away: News that America’s current economic expansion is now the longest in history will be all over the financial newswires this week. While it’s true that US economic growth is setting records in terms of its sustained length of time, it isn’t in terms of several other important measures. For example, the top cycles for cumulative GDP growth were 52% (1961-69) and 43% (1991-01) compared to a gain of just 25% at present.

Are we being Debby-downers? No, rather we’re making the point that the current expansion could have much further to run, as the typical catalysts of a downturn, like high or rising interest rates or substantial economic imbalances, simply don’t exist at present. As such, so long as the almighty American consumer continues to reap the benefits of 50-year low unemployment and keeps spending, the good times could last much longer. 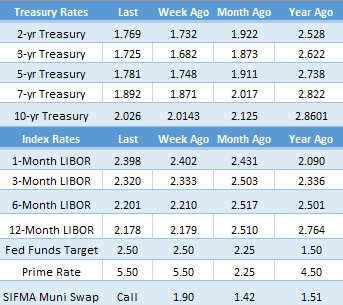 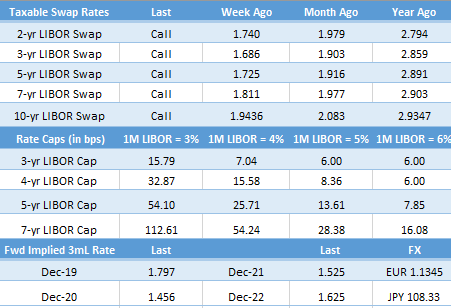