Last Week: During a chaotic week that included a near-crisis over the European common currency and the beginnings of a trade war, interest rates were mixed, and equities were little changed, both having partially recovered from steep declines sustained early in the week. The yield on the US 10-year Treasury note declined to 2.90% from 2.94% a week ago, having fallen as low as 2.82% last Tuesday. 1-month LIBOR increased on a more sustained basis, wrapping the week just above 2.004%, up from 1.9803% this time last week. Oil prices continued their decline over the week, falling to $66.50 a barrel from $68.75 a week ago, and the US Dollar ended mostly unchanged after a volatile week. After rising notably on the back of the Italian political crises, Gold gave up all of its gains and then some by week’s end. Treasury market volatility, as measured by the Chicago Board Options Exchange Treasury Volatility Index (TYVIX), fell from 5.08 early in the week to 4.08 by week’s end.

Strong US jobs report soothed market fears. Unemployment fell in April to 3.8% – the lowest level since April 2000 –  while the economy added 223,000 new jobs. Wages advanced at a 2.7% annualized rate. So far in 2018, nonfarm payrolls have grown 207,000 per month on average.  Last Friday’s jobs report was a solace of sorts for a market that was rattled by political events in Italy and the US, and rendered a 0.25% Fed hike on June 13th a done deal. Further, the improved data reignited speculation that the Fed will hike interest rates four more times this year, although we’re sticking with our forecast of just three at present.

US Q1 growth was revised down slightly. The US economy grew at a 2.2% annual pace in the first quarter of the year, the Bureau of Economic Analysis reported. That’s down a tick from the government’s earlier 2.3% estimate. However, a faster pace of growth is expected in the second quarter, with some reputable models forecasting a 4.7% pace. Strong manufacturing data from the Institute for Supply Management reinforced the case for a Q2 growth rebound, with the ISM purchasing managers’ index coming in at 58.7, well above expectations.

Trump showed there’s a bite behind his bark. Ending a two-week old truce in the trade spat, the president forced tariffs on the US’s NAFTA European, Canadian and Mexican partners amid the renegotiation of the trade pact by allowing exemptions from steel and aluminum tariffs to expire, resulting in 25% levies being imposed on imports of steel, and 10% on aluminum. The Trump administration also reversed course by reinstating tariffs on $50 billion in imports from China and took steps to protect US intellectual property by restricting Chinese investment in certain US technology companies. Is the President going off the handle, pushing us into a growth-killing trade war? Probably not, as the change is likely a bargaining tactic aimed at bringing about an agreement amid protracted talks. The issue will hang around for quite awhile however, moving rates around as it ebbs and flows. Ignore it at your peril.

Turbulent week in Italian politics ends with new leader and temporary avoidance of Greece 2.0. A chaotic week in Italian politics – and markets – ended with the much-awaited formation of an anti-establishment government. What happened? Markets feared that the possibility of a new, anti-establishment and anti-European Union government would spark the movement of Italy’s withdrawal from the European Union, sending Italian asset prices spiraling lower and driving US Treasury yields markedly lower with them, as global investors sought a safe-have from the turmoil. Markets recovered their poise late in the week, as Italy’s new prime minister and new government stressed that they do not want to leave the euro, which helped calm things down. If the events surrounding Italy and the trade tariffs over the last two weeks haven’t woken you up to the impact that global events can have on US interest rates, the time to pay attention is now – it’s not all about the Fed and economic data folks!

Trump and Kim’s on again, off again affair is back on. While a new date for talks between President Trump and North Korean leader Kim Jong Un hasn’t been announced, preparations for a meeting have resumed after Trump pulled out of the planned June 12 summit in Singapore a week ago but left the door open for future talks. Trump managed expectations by stating that it may take more than one meeting to come to an agreement on the de-nuclearization of the Korean peninsula.

What to Watch this Week:  After the geo-political driven whipsaws over the last two weeks, the data and event docket this week will be refreshingly light. The focus will be Wednesday’s April international trade data, which will garner unusually high scrutiny in light of the intensifying trade imbalances and tariff threats.

Both US imports and exports have been growing at an accelerating pace over the last few years, in lockstep with the improving US and global economy, resulting in a widening of America’s trade deficit (if you didn’t know, the US imports far more than it exports, just look around at all the Chinese made goods in your house and the BMW, Lexus or Honda in your driveway). As the US economy continues to grow, America’s trade deficit will expand, especially if the dollar continues to strengthen. A strengthening dollar makes imported goods cheaper compared to their US competition, making them more appealing for purchase by US consumers.  This dynamic will keep the trade issue front and center for the Trump administration and keep it in the news headlines for months. What’s it mean for interest rates? Its complicated. Just know that a growing trade deficit, among other things, indirectly helps to keep a lid on US Treasury yields as foreign governments reinvest their US-trade driven riches back into US Treasury bonds.

Take-Away: The May jobs report gave us evidence that America’s job-creation engine is humming along nicely and will likely speed-up along with the underlying trend in economic growth. The report also told us that the diminishing supply of labor is finally, slowly but surely, pushing up wages, which will eventually show up in higher consumer prices, aka inflation, giving the Fed greater confidence to continue on its path of gradual, incremental interest rate hikes this year and next.

While a 0.25% Fed hike on June 13th is now widely accepted as a done-deal, we may change our view if the geo-political tumult in Italy, the emerging markets and/or the flare-up in trade talks take a major turn for the worse. For now, we’re sticking to our expectations for three more 0.25% Fed hikes this year, one this month, another in September and another in December-ish. Global tensions will continue to spark volatility in rates in the weeks and months ahead, but continued US growth, job creation and increasing wages will keep the Fed on its slow, incremental hiking path regardless.

A fly in the ointment could be the Fed’s concerns about the ever-flattening Treasury yield curve, and if the continuation of the phenomena could cause it to shelve or delay its rate-hiking plans. Since an inverted yield curve has historically been a reliable recession indicator, the gap between yields on two- and 10-year notes shriveling to as little as 40 basis points last week is causing concern. Have questions about yield curves but are afraid to ask? See our in-depth discussion here: Borrowers: The Flat Yield Curve May be Your Friend 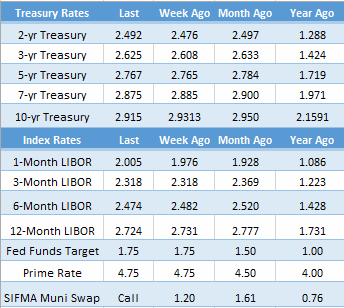 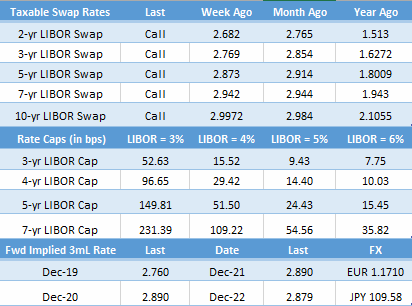 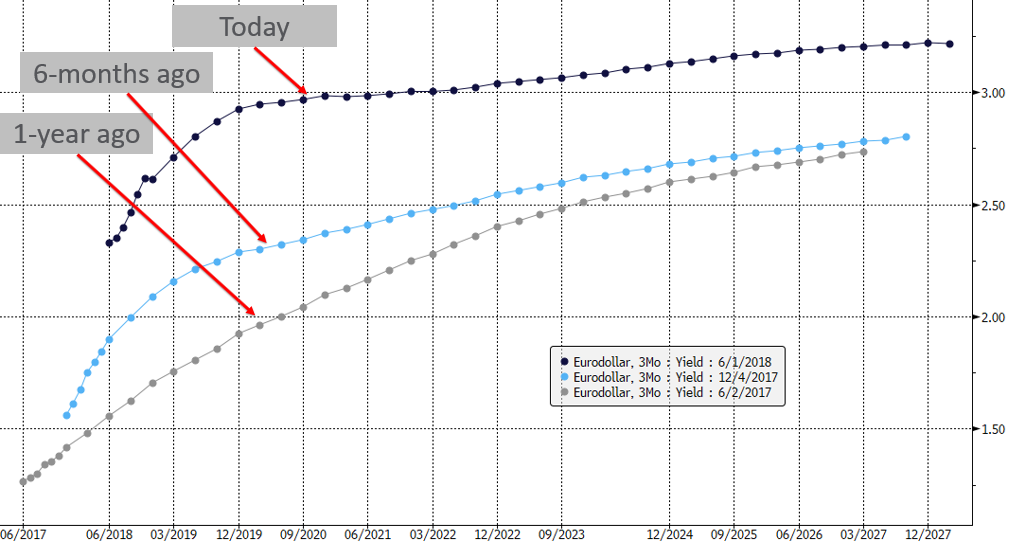