Last Week: Yields moved higher and held through the week, as equities and mostly positive economic data releases left an impression of a gradually improving US economy. Standout news for the week was the upward revision in Q1 GDP from 0.5% to 0.9% and Fed Chair Yellen’s speech on Friday which signaled a probable rate hike in the “coming months”.

Equities and Oil rallied, while the yield spread between two and ten-year Treasuries narrowed to 92 basis points, the narrowest level in more than eight years, as traders prepared themselves for a June hike, while global investors sought the safety of the world’s most secure assets.

This Week: A busy week for US data, capped by Friday’s release of the all-important and much anticipated jobs data for May. We’re expecting a slow-down in America’s jobs creation engine with just a 140K rise in payrolls (with the monthly trend holding near 200K however), the unemployment rate falling by 0.1% to 4.9%, and a 0.3% rise in hourly earnings – none of which will change the Fed’s outlook for a near-term interest rate hike.

Other important data releases on inflation, manufacturing, services, personal income, home prices, construction spending, auto sales and the trade deficit will, on whole, show a continuation of slow and steady growth in all the right places while a handful of Federal Reserve speakers are scheduled throughout the week.

There’s no shortage of market moving events in the near-term, with the upcoming Fed meeting, an OPEC gathering,  BREXIT uncertainty, an upcoming European Central Bank monetary policy meeting and an upcoming important election in Spain will keep things interesting in the coming weeks.

Take-Away: We continue to believe that markets aren’t pricing in a high enough probability of Fed tightening over the next year, and it’s looking like the next move will be in July versus June. The main motivation for Fed tightening is that America’s economy is seemingly running out of spare capacity, as jobless claims remain on trend, job creation remains near or above a 150K per month and near its 200K monthly trend, and wage gains creep higher. 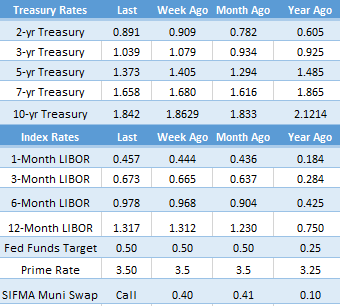 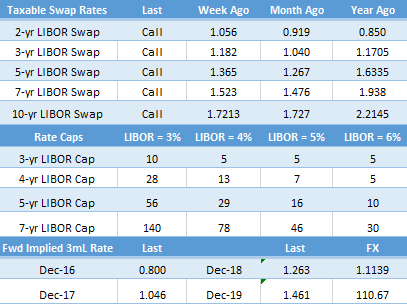