For a peek into where rates are headed this year, see our 2019 Interest Rate Forecast.

Last Week: Interest rates drifted within tight ranges and equities moved higher on the week, boosted by news of progress in US-China trade talks and growing signs that the Fed will take a patient, slow approach on future rate hikes. The yield on the US 10-year Treasury note firmed six basis points to 2.70% while 1-month LIBOR rose to 2.5141%, up very slightly from 2.5111% a week ago. Oil rose nearly $3 to $51.80 amid talk of further Saudi supply cuts, as the US Dollar weakened, and Gold traded flat. Treasury yield volatility, as measured by the Chicago Board Options Exchange Treasury Volatility Index (TYVIX), slipped to 4.02 from 4.48 a week ago.

Fed now widely seen as “patient” amid conflicting economic signals. The Fed launched a massive communication campaign last week, preaching to all who would listen that it will be patient about executing rate hikes in the near future. Speaking in Washington, Fed Chair Powell expressed concern over slowing global growth but said he sees inflation holding steady close to the Fed’s 2% target, a level which, when combined with a hot labor market, would generally signal the need for a hike if it weren’t for slowing economic growth. In sharp contrast, markets suggest that there are low odds of a hike in all of 2019 and are even implying a rate cut in 2020. Our take: The Fed expects to tighten further but is happy to pause for the time being to assess the lay of the land. It has now shifted to a wait-and-see approach to gauge whether “tail risks”, e.g. a slowdown in global growth, renewed trade tensions, or further tightening in financial conditions, will start to materialize before hiking again. At present, we’re confident we’ll see at least one 0.25% hike this year, likely in the second half.

Slight progress in mid-level US-China trade talks, but major issues remain. Progress was reported on issues such as China increasing purchases of US agricultural and energy commodities, but China’s subsidies to state-owned enterprises and disrespect for intellectual property rights remain outstanding. Those are expected to be tackled in senior-level talks in Washington on January 30 & 31st. While we doubt either side will reach meaningful compromise ahead of the Trump Administration’s March 2nd deadline, a meaningful deal will be reached late in the year as economic pressure is felt on both sides of the Pacific.

China’s growth target likely to be lowered. Word on the street is that China will lower its 2019 economic growth target to 6% – 6.5% from around 6.5% in 2018. Growth of about 6.2% is needed over the next two years for China to reach its long-term objective of doubling its GDP this decade. A dramatic retrenchment in Chinese consumers’ spending habits and ongoing trade tensions with the US have put that goal in jeopardy.

More signs the global economy is slowing. Industrial production data for Germany and France, the economic lynchpins of the eurozone, fell sharply in November, joining Italy and Spain who saw similar declines recently. The soft data reinforce the notion that while the European Central Bank has ended its asset purchase program, rate hikes are probably more than a year away. The news helped to erode support for US Treasury yields.

No end in sight for government shutdown. We’ll spare you the details here as you’re likely being bombarded elsewhere. Just know this: historically, shutdowns have had little effect on the economy. If the shutdown drags on for weeks however, tax refunds could be delayed and programs such as housing assistance for low-income families could be disrupted, impacting consumers spending patterns, the bedrock of the economy. Faced with the shutdown-induced uncertainty, businesses could also delay making investments or hiring. An unconventional solution to the government closure – like funding the proposed border wall via national emergency – would been seen negatively by the rating agencies, potentially impacting the credit rating of US Treasury debt.

What to Watch This Week: The data calendar is full of important data releases in the days ahead. However, with the government shutdown bleeding into a fourth week, we’re expecting some to be distorted or delayed altogether due to the inability of government agencies to collect data. This muddies the near-term economic outlook. All told, this week’s measures of wholesale inflation, manufacturing, retail sales, housing and consumer sentiment will show an economy that remains on solid footing.

Looking ahead, since it’s unclear how furloughed Federal workers will be accounted for in this month’s jobs report – one of the most important economic reports for interest rates – we’ll be on the lookout for signals on how it could shake out.

Take-Away: The sharp decline in long-term interest rates since November has resulted in a noteworthy flattening of the U.S. yield curve. The gap between short-term and long-term rates is now at the narrowest level since 2008, and borrowers have an attractive opportunity right now to lock in synthetic fixed rate term funding at rates that may be significantly below conventional fixed rate term debt. Contact us to learn more.

As explained in detail on our 2019 Interest Rate Forecast, market pessimism implies the Fed won’t hike at all this year. We beg to differ and believe that the Fed, despite stressing patience, will retain a bias for higher rates despite their new “wait and see” approach to new hikes. Economic conditions are still strong despite our expectation for growth to moderate from the robust 3.1% pace seen last year. Our projection for at least one hike this year would bring the midpoint of the Fed funds rate range to 2.625% from the current 2.375%, implying the Fed will raise rates to a level that’s roughly in-line with its most recent median estimate for the neutral policy rate – that which neither stimulates nor suppresses economic activity – of 2.750%. Given that monetary policy is still accommodative despite the Fed’s decision to hike rates four times in 2018, should more moderate economic strength continue, they’ll be plenty of reasons to maintain a bias for more hikes. 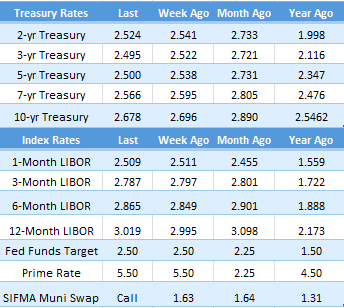 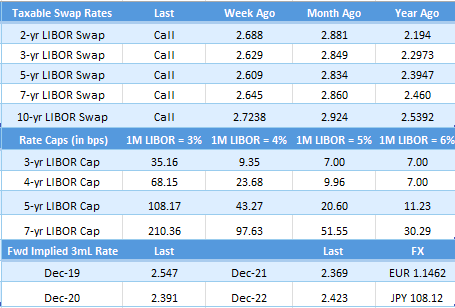 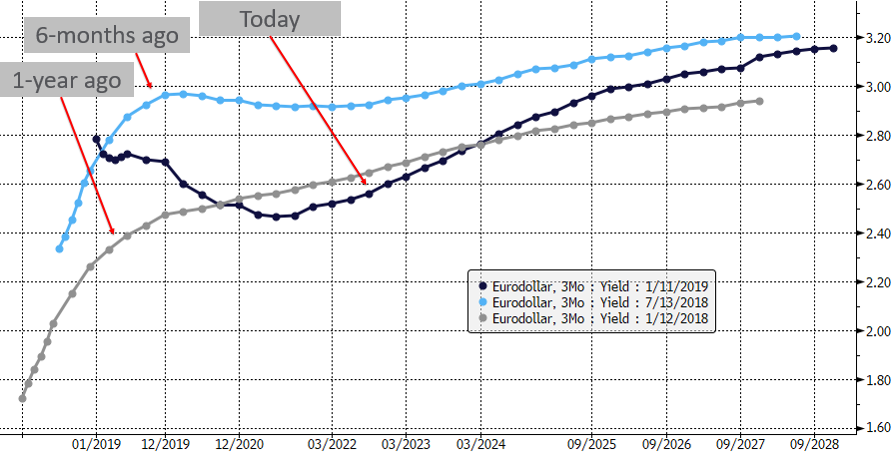