Last Week: US Treasury yields and LIBOR traded slightly higher and global equities were little changed despite an uptick in geopolitical jitters following the US missile strike on a Syrian airbase, a lackluster US jobs report and heightened potential for a shift in tactics by the US Federal Reserve later this year.  Oil prices firmed, the US dollar rallied and Gold traded flat. While falling to a 2017 low of 2.28% late in the week, the US 10-year Treasury recovered to 2.38% by week’s end, finishing the week close to levels seen before the Syrian air strike. 1-month LIBOR traded to .9900%, up from .9830% the week prior. Market volatility, as measured by the Chicago Board Options Exchange Volatility Index (VIX), remained subdued, at 12.8 on Friday versus 12 a week ago.

US Payrolls Disappoint. US payrolls expanded by just 98,000 in March, well below the 180,000-consensus forecast. In addition, both January and February payrolls were revised lower. On the positive side, the unemployment rate dipped 0.2% to 4.5%, the lowest level since May 2007, while average hourly earnings rose 2.7% versus a year ago, down slightly from 2.8% in February. Despite financial newswires hyping the negative aspects of the report, America’s jobs creation engine seems to have truly been stymied by a late winter storm, as the ranks of workers who noted a weather-related curtailment of work hours was ten times larger than usual. We’d be more concerned about waning jobs momentum if other indicators – like jobless claims – were also showing evidence of deterioration, which they’re not.

Surprising Fed Commentary. The minutes of Federal Open Market Committee meetings rarely make much news, but the summary of the March meeting did so on several fronts. The committee discussed shrinking the Fed’s mammoth $4.5 trillion balance sheet beginning late this year by allowing some of the assets it acquired in the wake of the financial crisis to mature. However, the committee did not outline specifically how it will change its reinvestment policy. Those specifics are expected later in 2017. Also newsworthy was that members of the committee opined on asset valuations more directly than usual, stating that they view current equity prices as elevated.

More Good News from Europe. The eurozone purchasing managers’ index in March rose to its highest level in nearly six years, reaching 56.2 from 55.4. That’s the highest since April of 2011. European retail sales rose solidly for the second month in a row in February, rising 0.7%. In the US, the Institute for Supply Management’s manufacturing index eased to 57.2 in March from February’s 57.7.

This Week: With US GDP growth poised to come in well below its recent trend, markets will focus on more signs the almighty consumer continues to carry the economic load. April Consumer Sentiment, March Consumer Prices and March Retail Sales data will take center stage in the holiday-shortened week. While increasing markedly since the election, consumer’s current sentiment and confidence in the future is expected to top-out after hitting decade highs in recent months. Despite rising questions on the degree and timing of the delivery and implementation of Trump’s domestic agenda, we believe consumers, for the moment, are keeping the faith.

In addition to economic data, the calendar, yet again, is full of scheduled speeches by Fed officials, including Fed Chair Janet Yellen. Although  we don’t expect to hear market moving comments, any public appearance by the Fed Chair warrants watching closely.

Take-Away: The Fed continues to actively and publicly debate its strategy for exiting its ginormous balance sheet. There’s also a growing consensus in the market that when the Fed does begin to wind down its balance sheet, that it will also stop hiking and that could occur as soon as the end of this year or early 2018. The verdict is out for now, but over the coming weeks we’ll be watching for clues on how the Fed’s ongoing comments about balance sheet exit affect the outlook for interest rate hikes.

There’s also another possible tailwind for yields: the $3 trillion of negative yielding foreign government bonds that are slowly turning positive as global economic prospects improve and foreign central banks wean themselves off monetary stimulus. Any slowdown in the tidal wave of money that’s flowed into US Treasuries would provide support for yields as foreign investors look toward their own domestic bonds. For now, barring any geo-political blow up, we’re expecting yields to remain range-bound as hype around the Trump, “reflation trade” mellows. 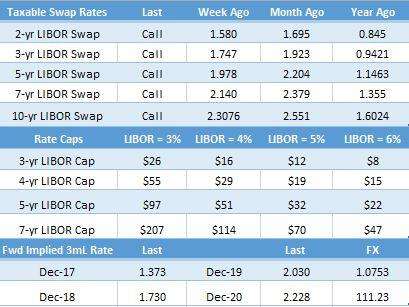