Last Week: After a volatile week, interest rates and equities extended gains amid optimism Congress will pass a tax reform bill, possibly before year-end. Strong global economic data helped send yields on US 10-year Treasury notes higher on the week, to 2.39% on Friday morning from 2.33% the week prior. 1-month LIBOR also traded higher, to 1.3793% from 1.3470% over the same period. Oil prices and the US Dollar were little changed, and Gold sold off. Market volatility, as measured by the Chicago Board Options Exchange Volatility Index (VIX), picked up, trading at 11.40 from 9.80 a week ago.

Senate Passed Tax Reform. The Senate passed its version of tax reform on Friday. The Senate bill now goes to conference between the House and Senate to iron out the differences in both bills in hopes of producing a combined bill that can pass both chambers. The chances of failure are still high, but we could see final passage of sweeping tax reform before the holiday break if all sides can agree to exclude a few extraneous pieces of legislation that have absolutely nothing to do with the tax code. Don’t get too hung up on specific parts of either bill now, as neither version is close to what the final version will be. While we expect several key parts of tax reform to remain, such as cuts to corporate tax rates, there is no way to tell at this point which deductions will survive the next stage of negotiation.

US Q3 GDP was solid at 3.3%. That’s better than the economy has produced in some time. The trillion-dollar question: Is it sustainable? The answer depends partly on the success of tax reform, specifically as it relates to Consumers continued high confidence in the future and their willingness to keep spending. Expectations were dented somewhat by last week’s release of November consumer sentiment data, which, while setting a 17-year high, came in below expectations. Remember, the driver of economic growth in the U.S. is still the consumer. Auto sales and the cleanup/rebuilding efforts after the summer hurricanes have been huge contributors to GDP growth so far and should continue to support growth for the fourth quarter. What happens after the holidays remains a question mark, at least until we know where the tax legislation stands.

Flynn pleaded guilty. You’ve head about it ad nauseum thus we won’t elaborate. The news spurred a shock dive in Treasury yields as the markets obsession with how many Fed hikes we’ll see next year and the probability of tax reform temporarily took a back seat to the collateral damage of the political firestorm. Yields rebounded somewhat once it became clear that consequences may not be as severe as some had hoped. Only time will tell.

US increased trade pressure on China. Somewhat under the radar but important nonetheless, the US Commerce Department initiated antidumping and countervailing duties investigations against imported Chinese aluminum sheet. The move is seen as significant because it represents the first time in 32 years that the government has undertaken an investigation on its own without being prompted by complaints from industry, a signal that the Trump administration will seek to enforce trade rules more vigorously than his recent predecessors. Why should you care? China is one of the largest foreign holders of US treasuries. Any prolonged trade skirmish between the two countries would add volatility to US Treasury yields.

What to Watch this Week: Events and data releases in the week ahead will have a significant impact on how we wrap up the year. On the data front, the November jobs report and trade data will dominate the headlines. Both will provide the first clean readings on the state of the economy after the hurricane-driven, bust and boom cycle boosted the data artificially higher over the last few months. Now free of distortions, the data will provide much-needed clarity of America’s true underlying growth trend, and will likely translate into a lower level of growth in Q4 than we saw in Q3. For the jobs data, we’re expecting a 200K gain, notably higher than the 167K twelve-month average.
On the event front, political events relating to the ongoing tax debate and the Mueller investigation could easily overshadow everything and spur unpredictable market moves. There are no Fed official speeches this week, as the Fed enters its blackout period ahead of next week’s FOMC meeting.

Take-Away: Assume the Fed will hike 0.25% at its next meeting on December 13. There is little that would alter that widely held expectation, and markets are now firmly focused on what 2018 will look like, both in terms of US economic performance and the resulting path of Fed rate hikes.
While the US economy has now exhibited two consecutive quarters of 3.0% GDP growth, we doubt that America’s economic engine will putter along at 3.0%+ pace for successive quarters next year, given the unsustainable, soon to correct hurricane-driven rebound in many economic gauges in recent months. What could get us there however is an appreciable increase in now muted business investment, as well as increases in consumer spending driven by continued labor scarcity and resulting increases in wages. Rest assured, regardless of the Fed’s forecast for three rate hikes next year, the Fed’s 2018 Road Map will change quickly if the economy isn’t performing as expected. For a deeper analysis, look out for our 2018 Interest Rate Outlook in early January. 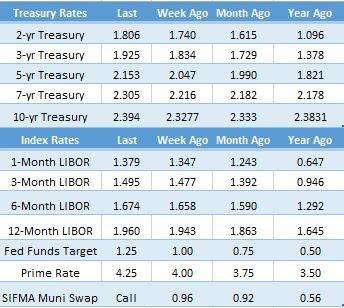 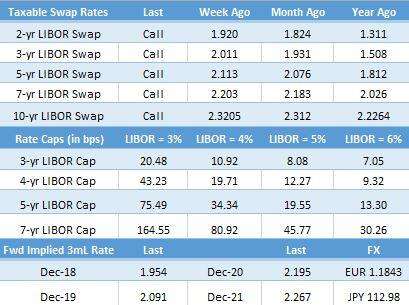 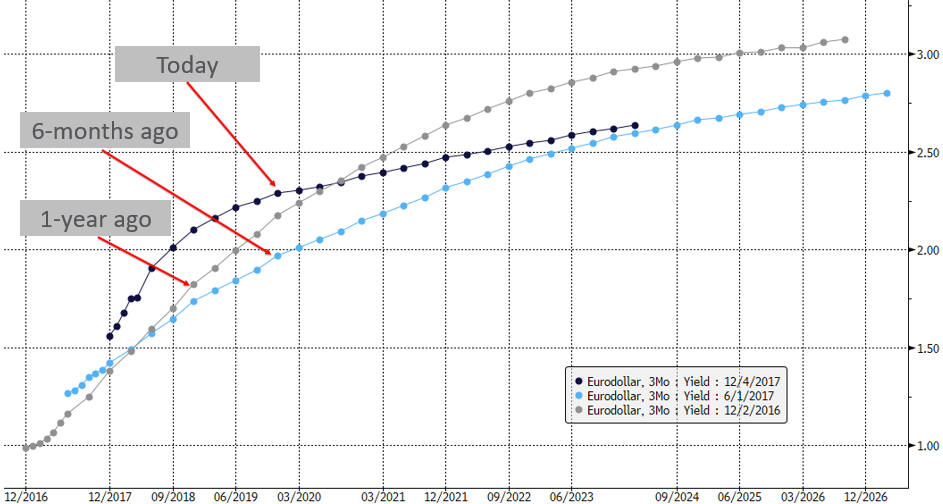 Click here for more DL Reports
What the New Fed Chair Means for Interest Rates Farewell Janet, Thanks for the Memories
Scroll to top