Last Week: Interest rates were mixed, and global equities rose sharply on the week. Strains in fixed income markets have begun to ease thanks to large-scale – in some cases unlimited – commitments on the part of central banks to add liquidity to markets and to purchase bonds in order to lower market rates. Credit markets have taken on a better tone in recent sessions with spreads on government bonds tightening from the very wide levels. The yield on the 10-year US Treasury note fell 0.29% to 0.67% while 1-month LIBOR marched steadily higher throughout the week to 0.98%. SOFR remained stuck at a rock bottom 0.01% throughout the week as the Federal Reserve staged successive, billion-dollar waves of interventions in repo markets. Oil remained on its back foot all week, suffering from the Saudi/Russian price war, falling $3.25 to $21.50. The US Dollar weakened dramatically throughout the week, and Gold strengthened. Treasury yield volatility mellowed a little finally, falling to 8.27 from 13.16 a week ago.

Has your lender reached out to you yet offering payment deferrals? Many banks are proactively offering principal and interest deferrals to what they deem “distressed” borrowers, typically for 90 days. This is the time when the “Force Majeure” and “Material Adverse Change” clauses in your loan agreement come into play. Watch out, these are usually detrimental to a borrower. We’ve heard that some banks are modifying loan agreements, eliminating covenants or changing the availability of drawdowns on revolving loan facilities. For distressed borrowers that entered into interest rate swaps, banks can even defer regular swap payments. Such a change could have a significant impact on the effectiveness of the hedge. Contemplating a payment, interest and swap payment deferral? Beware. Have a swap expert on your side to evaluate the effect of such before you pull the trigger.

Coronavirus update: Politicians finally step up. Building on the efforts from central banks, governments around the world announced economic rescue packages aimed at cushioning the negative economic effects of efforts to slow the spread of the virus. You’ve already heard about Congress and the White House passing a $2.1 trillion appropriations bill, but for some context, the package is equal to roughly 10% of GDP and about half of expected federal outlays for 2020 prior to the crisis.

Elsewhere, the European Union suspended the Stability and Growth Pact, which was meant to limit fiscal deficits of its member countries to 3% and total debt to 60% of GDP, allowing highly indebted countries – like Italy –  to increase spending in order to address the crisis. Germany, which abandoned its balanced budget pledge, announced €750 billion in economic stimulus. However, at the EU level, leaders have so far been unable to reach consensus on a broad-based rescue plan for all of the European Union countries. In Japan, the government is working on a large rescue plan, worth around 10% of GDP. Fiscal packages were also unveiled in Australia and Singapore. Remember all the squabbling in Europe years back about all the debt of Europe’s “Club Med” countries (like Italy, Greece, etc.)? That’s all out the window now, and justifiably so.

While governments took the spotlight last week, many of the world’s central banks increased their efforts to re-liquefy markets and keep credit flowing to businesses and households. Most notably among them, the Fed greatly expanded its support programs, announcing unlimited purchases of Treasuries and agency mortgage-backed securities and said it will purchase investment-grade corporate bonds while expanding efforts to unclog the market for municipal bonds, among other things. As part of the rescue package, the Fed will have the ability to backstop over $4 trillion in lending. In total, the extraordinary pace of interventions in recent weeks saw the Fed purchase $631 billion of Treasury securities, taking the it’s balance sheet above $5 trillion, up over $500 billion in the past week alone. For context, that’s 19.1% of GDP, just under the 25% of GDP seen after 2008’s financial crises. For a preview of how such a rapid balance sheet expansion could impact the US economy over the long term, check out our monthly newsletter, Negative Interest Rates for Dummies.

Elsewhere, the European Central Bank (ECB) opened the floodgates for its purchases of government bonds from EU member countries. Specifically, the ECB discarded its policy of owning no more than 33% of a eurozone member’s debt. Bonds issued by countries such as Italy, Greece and Portugal now have an even more willing major buyer, the ECB. Outside of Europe, the Reserve Bank of India cut its repo rate 0.75% to 4.40% after an emergency meeting. Finally, given that it’s suffering a double whammy from the plummet in oil prices and the pandemic, the Bank of Canada slashed its overnight rate 0.50% to 0.25% and launched two asset purchase programs.

Horrific economic data begin to illustrate scale of the crisis. Last Thursday’s US weekly jobless claims figures showed a record high 3.3 million-person jump in the number of people applying for first-time unemployment benefits. Prior to the crisis, jobless claims averaged 220K a week while the previous record high of 645,000 was set during the deep 1982 recession. In Germany, business confidence showed its largest one-month decline on record while preliminary purchasing managers’ indices (PMI) plunged across the Continent. The eurozone composite PMI fell to 31.4, the lowest reading on record. In the US, the composite PMI slumped to 40.5, the lowest level since October 2009. As such, the big investment banks tried to outdo each other with their doom and gloom forecasts; their outlooks for Q2 US GDP are for a historic, never before seen declines to the tune of a -14% to -24% QoQ annualized contraction and a 3.8% to 5% decline for all of 2020. Tighten your seat belt, there are more scary data coming. Read on for details.

SIFMA jumped. For our municipal and non-profit clients, the SIFMA Municipal Swap index – a 7-day high-grade market index comprised of tax-exempt Variable Rate Demand Obligations – surged in yield hitting a high of 5.20% and currently 4.71%.  The tax-exempt average yield for the year was 1.49% compared to 1M LIBOR 1.9565%.  Why the jump?  Variable rate bonds are the easiest to dump because they can always be sold at par.  Liquidity is at a premium and portfolio managers are selling whatever is most liquid.

What to Watch this Week: Buckle up – it’s going to be ugly. A myriad of crosscurrents awaits markets in the days ahead, from quarter-end driven volatility to a torrent of scary, white-knuckle economic data.

Front and center will be the jobs report for March, set for release on Friday. While the report is due to break a streak of 113 consecutive months of job gains, don’t be fooled by the data; there is a chance that the report will vastly understate the carnage in the jobs market due to a technicality in how payrolls are counted. Here’s why:

Workers need to be unemployed for the entire pay period containing the 12th of the month to be counted as a lost payroll. As a result, workers who are paid bi-weekly, semi-monthly or monthly and managed to work just a short period at the start of the month will still be considered employed in the payroll count. The same would also apply to workers paid on a weekly basis who got paid for even just one hour on March 8th or 9th.

Because of this counting issue, the March jobs report will likely greatly understate the extent of job losses occurring as a result of the economic “hard stop” containment efforts. Instead, the more important information regarding the speed of labor market deterioration will be the weekly data on filings for unemployment benefits, aka initial jobless claims, set for release on Thursday.

After spiking the most on record last week, again by 3.3 million, the trajectory of jobless claims data over the next few weeks will shed light on the magnitude of job losses which will occur throughout Q2. Given that state unemployment filing systems have been overwhelmed by the sheer volume of applicants, it’s possible that the initial jobless claims tsunami may not have even crested yet.

All told, job losses will spark a jump in the unemployment rate toward 6% in April from the 3.5% seen in February, and peak at 7% in Q2 at a minimum. If by some chance the March jobs report doesn’t end the long streak of new job creation, rest assured the April report undoubtedly will. Given that the US now has the world’s most confirmed Covid-19 cases, expect the pain to get worse before it gets better.

Other important data on consumer confidence will be released Tuesday, showing a crushing blow to consumer appetite for spending after being forced to manage the hairpin pivot from a maturing, record-long economic expansion into one of the sharpest contractions on record. This will lead to coming carnage in the retail sector via retail sales data, due in the coming weeks.

Big Picture: 10-year Treasury yields swung a mere 22 basis points last week after a historically volatile four weeks when yield moves averaged more than double that amount amid the pandemic turmoil.  The Fed is working overtime, stabilizing market conditions and hopefully preventing a liquidity crisis from becoming a solvency crisis. Don’t be fooled though, even with the Fed cutting interest rates to zero, by no means have Fed Chair Powell & Co. exhausted their stock of unconventional policy options. The Fed can and will widen and deepen an already broad range of new lending programs as it continues to fight the pandemic-driven economic crisis. At the end of the day, life after zero interest rates may not be as dire as it seems now. Hang in there! 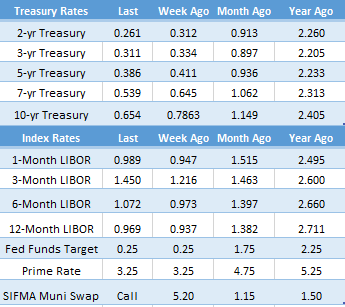 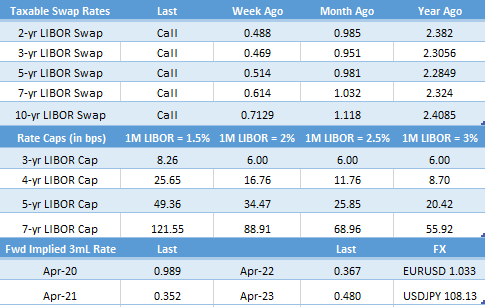 Bottom for Rates is Yet to Come
Scroll to top