Last Week: US interest rates and equities mostly slipped amid concerns that the Trump administration’s promised pro-growth policy agenda may have slipped into the slow lane as GOP lawmakers struggled to “repeal and replace” the Affordable Care Act. US 10-year Treasury note yield fell 10 basis points from a week ago to 2.41%, while 1-month LIBOR rose to .9828% from .9770 the week prior. Oil slumped to $47.80 from $49.25 as US production continued to build. The US Dollar fell and Gold rose. Volatility, as measured by the Chicago Board Options Exchange Volatility Index (VIX), rose to 12.4 from 11.2.

Markets have become concerned that the Trump administration’s failure to advance one of its signature agenda items could imply a struggle to pass market-friendly items like tax reform and infrastructure investment later in the Congressional session. A protracted fight on health care, at a minimum, could push those pieces back on the legislative calendar, delaying their positive economic impact. At the very least, the failure to repeal and replace the Affordable Care Act has diminished the new administration’s political capital.

Elsewhere, more signs of a recovering global economy emerged. European Flash purchasing managers’ indices jumped to their highest level in nearly six years implying that EU gross domestic product is growing at a rate in excess of 2%,annualized . The euro strengthened on the data, as well as on hopes that a centrist candidate will derail populist Marine Le Pen in the upcoming French presidential elections.

This Week: Four themes will dominate the market’s attention in the coming week. First, markets will focus on how quickly the Trump administration pivots from reforming healthcare toward tax policy and fiscal stimulus. Market sentiment has become increasingly concerned the administration’s broad agenda is getting bogged down and may eventually produce much less reform than is currently priced in.

Secondly, Thursday’s release of the third and final print of Q4 GDP will determine whether the much-publicized corporate profits recession truly ended in the second half of 2016, a belief widely held within markets and one that is partly responsible for the current levels of bond yields and equity markets. Thirdly, a full slate of scheduled speeches by Fed officials – including Chair Yellen – will give the Fed members ample opportunity to clarify their views on the economy and plans for unwinding its balance sheet. Lastly, Friday’s scheduled data releases on consumer income and spending will lend further clues as to whether consumers remain poised to continue leading US economic growth in the near term.

Take-Away: Last Friday’s political theater highlighted divisions within the Republican party and laid bare the fact that passing any major legislation – be it healthcare, tax or infrastructure related – won’t be easy. As a result, we likely won’t see any of the positive economic impact from fiscal stimulus until 2018, as legislation passed this year will take time to implement and manifest in the economy. In the meantime, the consumer alone will continue to shoulder the burden of economic growth.

The Trump administration obviously needs a victory on tax reform to offset the failed healthcare bill. We’re guessing that the President will now promote a less aggressive plan, one that incorporates a smaller cut in tax rates, and that his agenda overall may now be somewhat lighter and will be implemented later than planned. This “lighter and later” theme would be less stimulative to the economy, and place a drag upon just how high bonds yields can rise, especially long term yields, e.g. the 10 and 30-year Treasurys.

So what’s it all mean for the Fed’s purported 2 or 3 remaining rate hikes this year? The Fed isn’t taking recent economic growth signals at face value, and instead will continue to look at broad underlying trends for cues on when and how much to hike.  It’s important to remember that while influential, the Trump agenda is a mostly a distraction to a Fed that’s prone to hike on the back of positive and building US economic momentum. While we’re sticking to our forecast of at least two more hikes this year for the moment, any large unwind of the Trump reflation trade could easily cause the Fed to pause. For the upcoming week, yields are very much sitting at several key inflection points, and markets are hesitating, waiting to see which way and how the Trump administration will pivot. 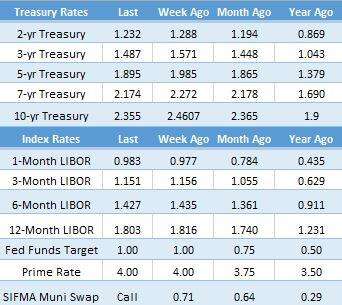 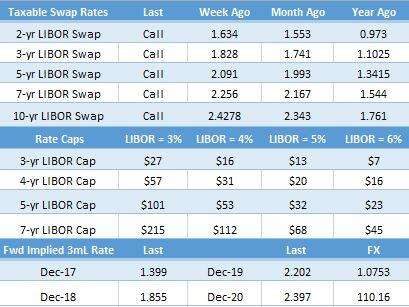 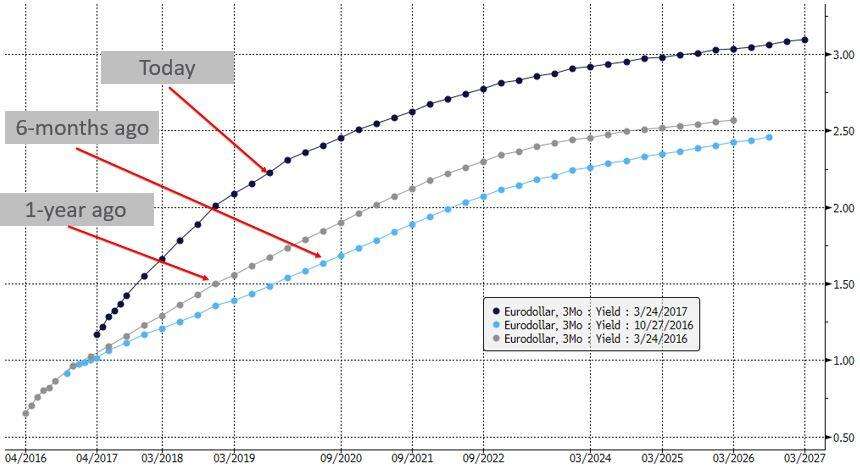