Last Week: Interest rates and oil prices both rose while global equities consolidated as two major pieces of US economic data, jobs and GDP, solidified belief in an improving economy and inspired hopes of more to come. Volatility, as measured by the Chicago Board Options Exchange Volatility Index (VIX) edged up to 14 from 12.6, the yield on the US 10-year Treasury note rose to 2.45% from 2.37% a week ago, while 1-month LIBOR traded to .6466%, up from .6054%.

The US economy added 178,000 new jobs in November, in line with market expectations, while the unemployment rate dropped to 4.6%, the lowest in nearly a decade. However, average hourly earnings, a gauge of changes in individual incomes, were disappointing, dropping 0.1% in November after rising 0.4% in October. Economists had expected earnings to rise 0.2%. News of an upward revision of Q3 GDP to 3.2% and after-tax corporate profits advancing a robust 5.2%, the first rise since late 2014, provided additional momentum to the rise in US yields. With unemployment plumbing decade lows, markets are busy assessing what the Fed will do next year as the relationship between unemployment and wages over the next few months will have significant sway over the future path of rate hikes.

While we continue to be the growth leader of the world’s developed economies, the good economic news wasn’t limited to the US. Global manufacturing purchasing managers’ indices have been showing a broad global turn for the better in recent months, a trend reiterated once again by the release of manufacturing data, “PMI’s”, from a slew of countries last week. PMIs in the US, China and the Eurozone all exceeded forecasts. The Institute for Supply Management’s US manufacturing PMI was particularly robust, rising to 53.2 from 51.9. A reading above 50 signals that the sector is expanding.

This Week: It’s a quiet week for US, with mostly second-tier data and a couple of Federal Reserve members scheduled to speak. The markets focus will be on central bank meetings in Europe and Canada, and price action around the political event risk out of Italy, where a failed referendum on constitutional reforms forced the Italian Prime Minister to resign. Whatever the outcome, Italy won’t leave the European Union anytime soon.

Take-Away: Last Friday’s Jobs data confirmed a resilience in America’s job creation engine and that broad economic momentum remains intact heading into 2017. Consumer attitudes have improved markedly and the markets are more sanguine, seeing politics as less problematic than expected. While a 0.25% hike on 12/14 is a given, we’re now expecting the Fed to begin shaping market expectations for another hike, perhaps to occur in Q2 2017.

Along with continued improvements in incomes, we’re now expecting that the American consumer will provide a strong boost to growth early next year. They’ll need to, as it will take months for the much-anticipated fiscal stimulus, a la Trump, to kick in. Once it does, likely in Q2 2017 at soonest, business and government investment will follow.

For interest rates, we expect continued volatility ahead, as the Trump bounce slowly ebbs and debt markets clamor back from their stretched and oversold stance. 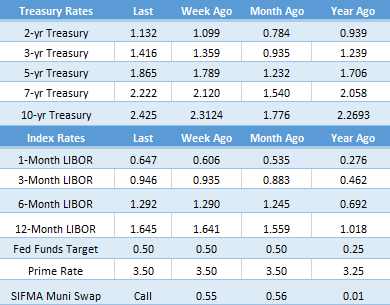 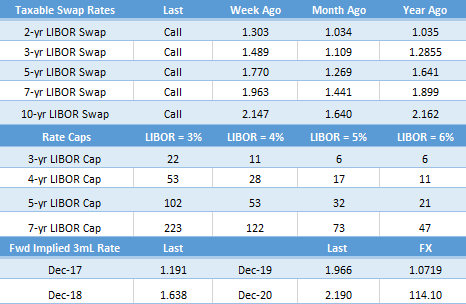 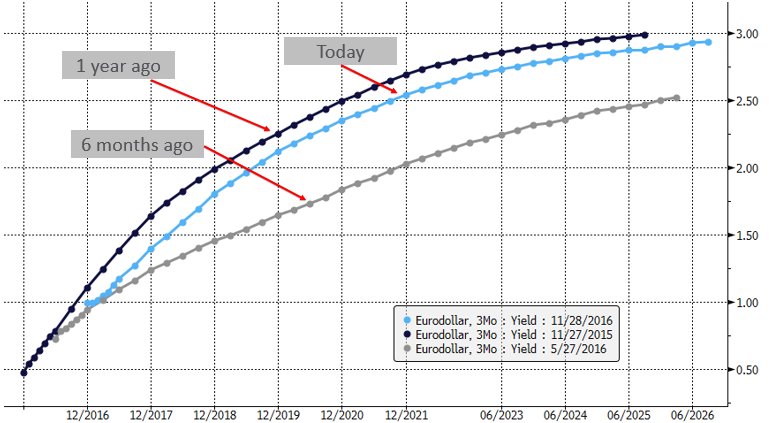