Last Week: Interest rates and equities were mixed amid light holiday trading that saw a continued, rare simultaneous sell off in stocks, bonds and commodities. The yield on the benchmark 10-year US Treasury note declined 5 basis points to 3.04%, while 1-month LIBOR rose slightly to 2.3218% from 2.3000% the week prior. Oil fell below its prior 52-week low of $50.90 to $50.42, as the US dollar strengthened, and Gold traded flat.  Treasury yield volatility, as measured by the Chicago Board Options Exchange Treasury Volatility Index (TYVIX), fell to 4.01 from 4.37 last week. Global markets are now on track for one of their worst years on record, sparking a deepening a sense of unease.

Global slowdown casts doubt over 2019 Fed hikes. Evidence of a global economic slowdown is steadily building, dampening expectations that the Fed will raise interest rates more than twice in 2019. While the Fed is still expected to hike 0.25% next month, the picture has become murkier for next year. Even though US growth remains robust, the pace of growth elsewhere continues to slow. Recent data from Europe, Canada, China and the emerging markets all point to a slowing trend and falling crude oil prices are signaling weakening demand in addition to supply overhang. For the past several months, financial markets have been grappling with how to handle the transition from a decade of highly accommodative financial conditions to one of tighter conditions worldwide, capped by a decline in confidence due to uncertainty on the global trade front. Unless we see signs that the US growth is slowing more dramatically, and also see continued market volatility, we’re sticking to our guns in projecting three more 0.25% Fed hikes: one in December, another in March and another in June of 2019.

Housing sector data were better than expected. The NAHB Housing Index, housing starts, building permits and existing home sales all performed better than expected, alleviating some concerns about a downturn in the sector. Despite the relief implied by the data, it’s clear that deteriorating affordability and higher mortgage rates will continue to be a drag on the demand for housing for a while yet, however, we expect the housing sector to get a second wind sometime in the latter half of 2019 as falling home prices and household income growth boosted by a tighter labor market restore affordability and vibrance to the sector.

Tensions high ahead of US-China trade talks. The war of words between China and the United States resumed ahead of scheduled trade talks on the sidelines of this week’s G20 summit in Buenos Aires on November 29th. If the two sides are unable to come to an agreement, US tariffs on Chinese imports are likely to rise to 25% at the turn of the year from 10% today. We don’t expect much progress during the summit, other than a likely stand-still accord on new tariffs while more detailed negotiations continue on a lower level than that publicly seen between Presidents Trump and Xi. While we’ve said for months now that China will ultimately cave to many US demands, China doesn’t want to appear as doing so, and will likely hold out on the key issues of intellectual property transfers, subsidies to Chinese exporters and industrial policy until the very last minute. Despite a slowing economy, make no mistake that China is still the engine of global growth, hence the urgency in getting a deal done to avoid collateral damage. Until then, expect the issue to weigh on interest rates as the year comes to a close.

EU moved to discipline Italy over its budget. The EU has once again rejected Italy’s proposed 2019 budget and has begun an excessive deficit procedure which subjects Italy to fines equaling 0.2% of its gross domestic product. Italy’s leaders are unconcerned by the threats, vowing to make good on campaign promises of a universal basic income, cutting taxes and lowering the retirement age. While we’ve mostly ignored the issue thus far, things are getting serious and could begin affecting US interest rates in a meaningful way. The trigger to watch for is if the EU formally sanctions Italy, which would prompt rating agencies to downgrade its debt below investment grade, and force many institutions, including the European Central Bank, to dump Italian bonds, causing many Italian banks to fail and erode support under US Treasury yields. While scary, if history is any guide, EU policy makers will shy away from such a scenario and begrudgingly give Italy a pass.

What to Watch This Week: Given the ongoing stock market turbulence and sell off in oil and credit markets, the main events of the week are speeches by Fed officials, where market players will listen keenly for signs that the Fed is losing its resolve to continue hiking sequentially.

In a rare scheduling of events, Fed Chairman Jerome Powell and Fed Vice-Chairman Richard Clarida will state their views on the economy one day apart, Clarida on Tuesday and Powell on Wednesday. Both have stated previously that market turbulence isn’t an outright concern of the Fed and doesn’t readily influence its rate-setting decisions, but if market volatility starts affecting the real economy, we expect the Fed to sing a different tune. For now, we doubt the speeches will state any concern about the decline in equities or rise in credit spreads, nor will they contain much more than an implication that we’ll see another 0.25% rate hike next month and that the officials believe that the Fed’s current stance is still accommodative.

The speeches will likely overshadow the data calendar, which includes the release of the Fed’s November meeting minutes, which should reveal clues on the Fed’s planned changes to its communications policy and the extent to which the Fed should continue hiking to engineer a soft economic landing. Data on personal income and spending for October will shed important light on the strength of Q4 GDP, and finally, flash Consumer Price Index (CPI) for November gets released, which should show headline inflation tumbling, likely dragging bond yields lower and flattening yield curves.

Take-Away: As the stock market, the price of oil and corporate credit markets have declined markedly in recent weeks, many clients have contacted us asking what it all means for interest rates. If you don’t remember anything you’ve read today, remember this: the greater the sell off, the more financial conditions tighten. The more financial conditions tighten, the less the Fed will hike.

As such, unless markets stage an unexpected turnaround soon, the Fed’s resolve to hike every quarter throughout 2019 will weaken. Should the Fed continue to dismiss market volatility, it will spell trouble for the now-positive US economic outlook. Over the next few months, market jitters could filter into real economic activity, as flagging confidence of individual consumers and businesses weighs on the pace of hiring or business investment. That’s not happening just yet. For now, we’re confident the Fed will successfully “thread the needle” and hike enough to slow growth to a more sustainable level, and avoid hiking too much, smothering growth in the process. 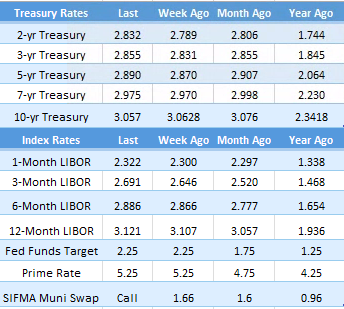 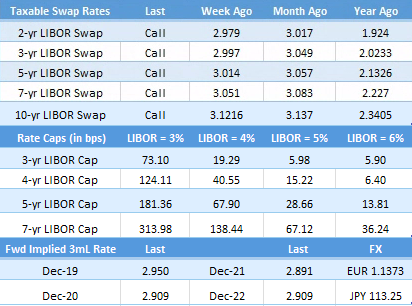 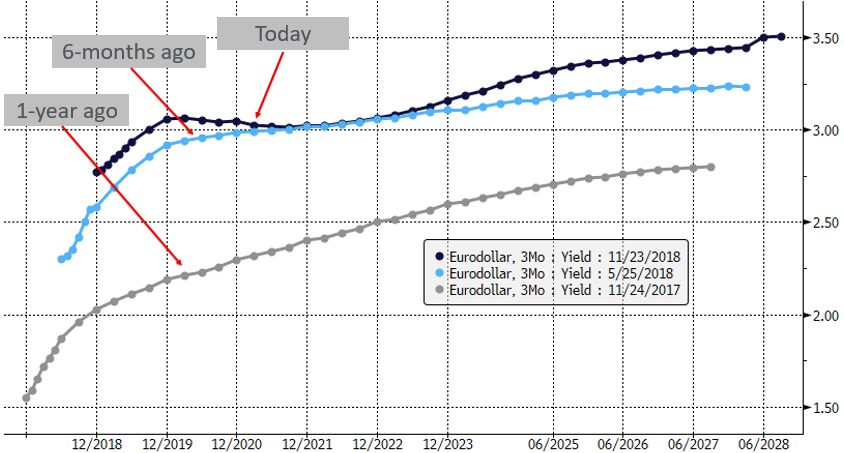