What You Missed Last Week: Long-term interest rates rose and equities were little changed on the week as stocks consolidated near record highs, underpinned by exceptionally strong economic data and Q1 earnings reports. The yield on the benchmark US 10-year Treasury note climbed eight basis points to 1.64% amid firmer commodity prices and higher inflation expectations. Short-term rates continued to plumb ultra-low levels, with 1-month LIBOR wrapping the week at .1072%, and SOFR holding ground at 0.01%. The price of a barrel of West Texas Intermediate crude oil rose $2 to $63.85, as the US Dollar strengthened, and Gold weakened. Treasury yield volatility, a key driver of the cost of rate caps and swaptions, steadily declined throughout the week.

Fed stands pat as economy strengthens. America’s central bank met this week, and while acknowledging improved economic performance, it stopped short of indicating that it will begin tapering its asset purchase program, a key factor in keeping short-term rates ultra-low, anytime soon. In the post meeting press conference, Fed Chair Powell said, while the economy has improved since December, it needs to make substantial further progress, which will take more time to achieve; adding that the Fed expects that near-term price pressures (aka inflation), resulting from pandemic-driven bottlenecks, will be temporary.

Our take: We’ve said over and over again in recent months that the Fed’s #1 priority right now is to ensure that economic conditions are ripe for job creation. And here we go again. Remember when, during Janet Yellen’s term as chair of the Fed, markets obsessed for literally years over the “dashboard” of labor market indicators she was watching to determine when the timing was appropriate to pull back the stimulus punchbowl? At the end of the day, Yellen proved smarter than pretty much anyone in her assessment that there was considerably more slack in the jobs market and less inflation pressure in the economy than conventional gauges otherwise suggested. Fed Chair Powell is now in a similar situation and will likely be even bolder than his predecessor in testing the economy’s ability to operate beyond conventional expectations of neutral.

Want to know which way the Fed is leaning regarding rate hikes? Look no further than the jobs deficit relative to pre-pandemic levels. America’s job market is now 8.8 million jobs shy of where it was before than pandemic began in February of last year. Powell has done his best – as recently as last week’s policy meeting – to communicate that he needs to see much more progress on the jobs front before the Fed is willing to contemplate easing off the stimulus throttle, even stating that a few months of 1 million+ in job gains would not be enough to change its current stance. Given that America’s jobs engine created 916K new jobs last month, that means that we’d need to see a few more months of similar job-creation performance before the Fed could be expected to act to slow things down.

As such, we expect that we’ll see similar job gains in the coming months, and that the Fed won’t clarify the timing of its tightening actions until this summer at soonest, eventually “tapering” in late 2021 or early 2022. By the way, the LIBOR forward curve doesn’t agree with us. It’s anticipating an earlier Fed rate liftoff than we expect.  However, beyond 18 months or so, the forward curve is wrong most of the time.

Environment improved for the always-important consumer, but what about inflation? Consumer’s personal incomes and spending spiked in March. For some perspective, the improvement was the most seen ever, specifically since the data began to be tracked in the late 1940s. The improvements have opened the way for even stronger readings on the state of the consumer – which accounts for 75% of America’s economic activity – in the months ahead. The double whammy of stimulus payments and broadening, vaccination-fueled reopening drove the improvement, and, when combined with a boost from accumulated savings, should support even brighter days in the coming months.

What comes with more money to spend and constrained supply chains? Higher prices, aka inflation. While year-over-year core inflation also accelerated sharply in March, the Fed does not care, calling it “transitory.” How so you ask? Well, according to the Fed, current spikes in things like raw materials costs (e.g. lumber) and higher transportation rates (e.g. gasoline) will eventually come down as slack in the labor market fades. The logic being that, as companies are faced with increasing demand, they will (re)hire, increasing the rate at which they can produce, creating a release of sorts in the pressure valve of higher prices. With the true jobless rate around ~8.8% in March after adjusting for the pandemic shock to labor force participation, the Fed can afford to be patient in its judgment to tap the brakes, at least for now.

US growth accelerated in Q1. GDP expanded at a 6.4% annual rate in Q1, building on the 4.3% growth rate recorded in Q4 2020. At the current pace, the economic slack caused by the pandemic will be absorbed by the middle of this year. Spiking consumption by consumers (as mentioned above) drove the gain in growth. Overall, this suggests consumers have plenty of spending power at their disposal as the economy continues to reopen.

Gundlach gauge says Treasury yields are going higher. Jeff Gundlach, the “bond king” (LOL), has been getting some attention lately from his often-watched copper vs gold price ratio, which has been a decent indicator of where the 10-year Treasury yield is headed in the near-term. The logic is this: Rising copper prices indicate rising demand for home-building and other industrial inputs, a sign of a strengthening economy. Simultaneously, gold prices – a safe-haven destination for investors – has stagnated since its 2019 peak in early September as investors seek greater risk/return in other, less stable assets. As a result, copper prices have risen to the highest level relative to gold since last July, a dynamic that has proven to be a good predictor that the 10-year Treasury yield will also rise (as prices fall) on the back of an improving investor appetite for risk. We’ll see how it plays out.

Biden introduced plan focused on education, childcare. President Biden unveiled a $1.8 trillion spending plan designed to bolster education and childcare and to provide paid family leave. Biden wants to pay for part of the new spending through a hike in the capital gains and dividends tax from 20% to 43.4%, on those earning more than $1 million annually including a Medicare surcharge for high earners. The top income tax rate would rise to 39.6% from 37%.

What to Watch This Week: It’s jobs report week. The pace of hiring in March (+916K) was likely repeated in April, as the economy surges toward a full recovery in output terms. While encouraging, a complete recovery in jobs, a key metric guiding the Fed’s actions going forward, will take much longer.

With GDP on track to grow nearly 8% this year and, presumably, a significant share of workers who are part of the 8.8 million unemployed ready to get back to work over the next several months, we could easily see a 1MM+ run in new jobs over the next few months. Should this occur, labor-force participation will rebound, which in turn will make further declines in the unemployment rate harder to come by.

Big Picture: Despite the financial media shouting calls of concern around the recent spike in inflation and the Fed’s seeming ignorance of it, financial markets are validating the Fed’s “do nothing” stance. After spiking to 1.76% in reaction to the improved economic outlook and inflation concerns, the 10-year Treasury yield has declined, now resting at 1.63% – 13 basis points off its recent peak.  Equity markets have also extended their march into record-breaking territory.

The Fed’s play book is working perfectly so far. However, a time will come when the growing inconsistency between ultra-loose financial conditions on the one hand and a strongly recovering economy, rising inflationary pressures and pockets of excessive risk-taking on the other will need to be reconciled. The longer it takes to play out, the greater the Fed’s difficulty in weaning the economy and markets off the easy money gravy train without risking significant interest rate and stock price volatility, and potentially, derailing the durable and inclusive economic recovery they have worked so hard to achieve. 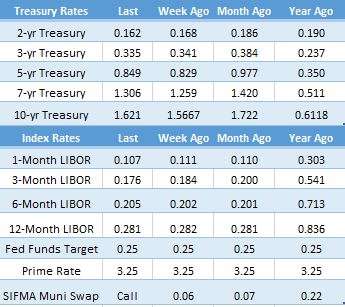 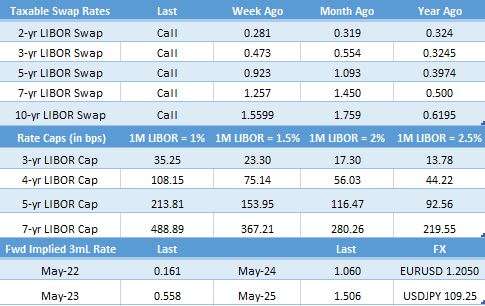 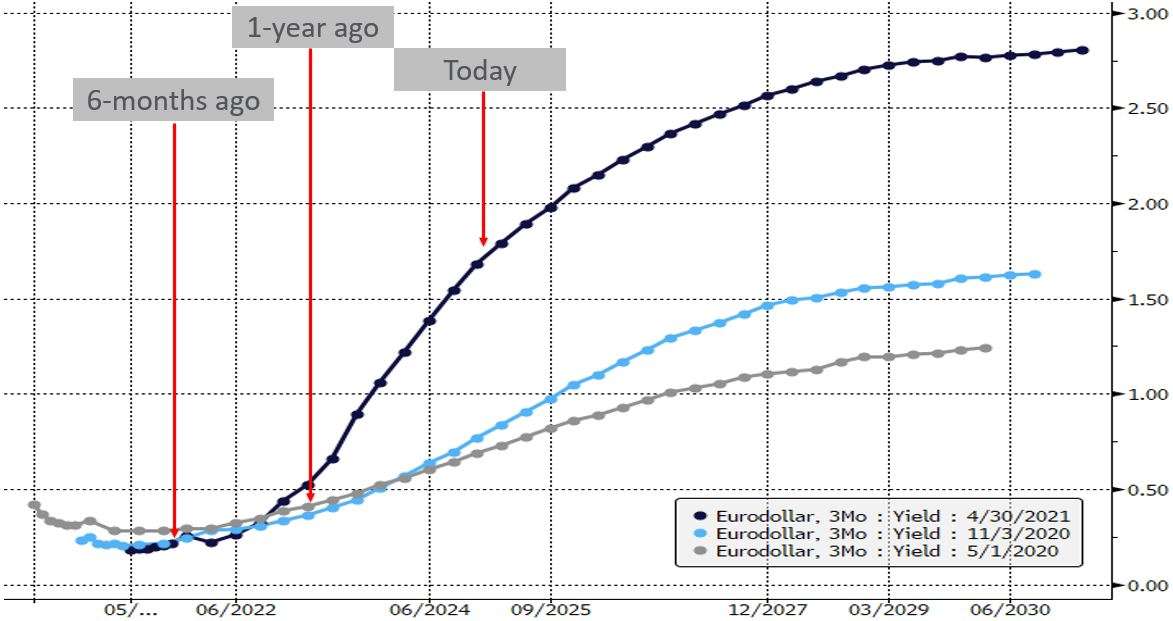 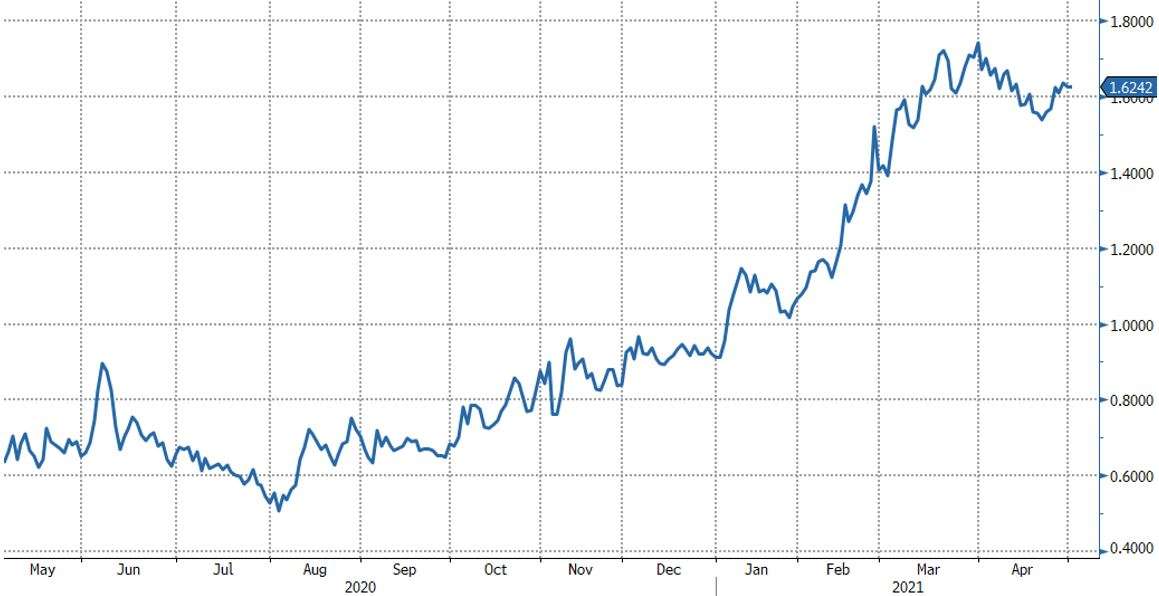