Last Week: Interest rates and equities were lower for the week amid mounting concerns over slowing global economic growth and the chaotic Brexit process playing out between the United Kingdom and the European Union. The yield on the US 10-year Treasury note declined 9 basis points from a week ago to 3.09%. 1-month LIBOR followed suit, falling to 2.3000% from 2.3103% this time last week. Oil continued its descent, falling to $57.60 from $60 last week.  The US Dollar weakened as Gold rose. Treasury yield volatility, as measured by the Chicago Board Options Exchange Treasury Volatility Index (TYVIX), rose to 4.21 from 3.90 this time last week.

Fed Chair Powell is feeling warm and fuzzy about the state of the US economy. In an appearance at the Federal Reserve Bank of Dallas, Chair Powell partially credited Fed policy for the solid US economy, citing low unemployment, strong growth and stable inflation. He also highlighted the fading boost from tax reform and the lagged impact of Fed tightening on the economy to date. The Fed chair says he has good reason to think that the economy will remain strong, though he did note potential headwinds from abroad. Our takeaway: Outside of some unexpected exogenous shock, another 0.25% Fed hike in December is assured, as Fed officials want growth to slow enough to stop the downward trend in unemployment and to slow the pace of economic growth to a more sustainable level.

The UK and EU took a big step toward clinching a Brexit deal. Months of negotiations between the UK and the EU came to an end with both sides agreeing on a draft withdrawal treaty. The agreement was endorsed by Prime Minister Theresa May’s cabinet on Wednesday evening but hopes for the treaty’s eventual passage dimmed greatly after several cabinet ministers resigned and letters of no confidence from members of May’s Conservative Party were submitted.  In short, while encouraging on the surface, the deal turned into a UK Conservative party leadership brawl and a crisis of confidence in the government that could lead to national elections. With a looming drop-dead date for Brexit to occur on March 29, 2019, any leap forward or backward in negotiations makes global headlines. While exciting to observe, we seriously doubt the US or the global economy will be seriously affected either way as businesses are already exiting the UK for Europe and fresh investment in the UK is grinding to a halt.

Oil slumped anew amid supply glut. In a sign of how fickle commodity markets can be, oil fell to its lowest level in nearly a year a month after reaching a one-year high. West Texas Intermediate spiked above $76 in early October, pressured by supply fears ahead of the looming re-imposition of US trade sanctions on Iran. However, an increase in US shale oil inventories overwhelmed the curbs on Iranian crude, sending prices tumbling nearly $20 over the last 6 weeks.  Why you should care: The recent drop in oil prices is likely to result in fairly weak US headline inflation in November and December following the strong reading for October. Any further significant declines in the price of oil could diminish one of the Fed’s reasons for hiking in December and beyond. That being said, core inflation data and wage gains – not headline inflation – are much more impactful on Fed deliberations.

More signs of a weakening Chinese economy ahead of Trump-Xi Meeting. Credit and money growth in China continue to slow as efforts by the local government to spur infrastructure spending have failed to have lasting impact, and credit demand remains weak amid slowing economic growth and uncertainty surrounding trade. Chinese officials have been sending conciliatory signals on trade to US negotiators in advance of a planned meeting between US President Donald Trump and China’s Xi Jinping late this month. As we’ve said for months now, China will ultimately cave to many US trade demands given that its economy is much less able to withstand the economic blows a trade war brings. We doubt a comprehensive trade agreement will be struck when the leaders meet on November 29th.

What to Watch this Week: If you have any swaps to enter into or rate caps to buy, normal market hours are in effect on Wednesday ahead of a full close on Thursday for the Thanksgiving holiday. Both the equity and bond markets close early on Friday.

Given that the most recent reading of Q3 GDP showed an uneven distribution of economic activity, one where consumers accounted for the lion’s share of growth in the quarter and business fixed investment nearly stalled, increased scrutiny on measures of capital spending is taking place. This week’s release of durable goods orders for October will provide the next opportunity for doing so with an expected decline, which will be questioned as a possible sign that business investment is slowing as the current economic expansion bleeds into its later stages.

Data on the housing sector will dominate the remainder of the week’s docket.  Monday’s homebuilder sentiment, starts and permits on Tuesday and existing home sales on Wednesday are expected to paint a picture of contraction as rising mortgage rates take their toll.

Take-Away: As geopolitical turmoil and global-growth concerns mount, some are concluding that the Fed will shorten its path of planned rate hikes (or outright pause them) earlier than previously expected. We’re not in that backpedaling camp just yet.

With Italy’s ongoing budget fight with the EU, the relentlessly chaotic Brexit negotiations, the US-China trade war and building signals of what could be an economic cooling in the US, markets are now pricing in only about 35 basis points of Fed hikes next year, down from over 50 basis points earlier this month. The 10-year Treasury yield, currently at 3.06 percent and down from its seven-year high of 3.26 percent set last month, is reflecting this creeping uncertainty as global investors seek its safety.

For now, we’re fully expecting the Fed to stop hiking somewhere mid to late next year and even see the Fed cutting rates in 2020 as the economic tailwind of fiscal stimulus fades, slowing the US economy notably by then. We’ll have a better sense of that upon release of last week’s Fed meeting minutes on Nov 29th. The minutes could provide clues about the Fed’s thinking on a wide range of topics including changes to how it communicates to markets, the appropriate size of its shrinking balance sheet, and the extent to which it needs to keep hiking to reduce growth to a sustainable level. 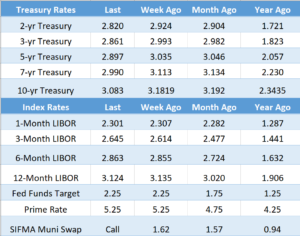 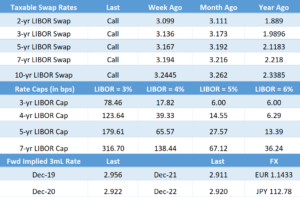 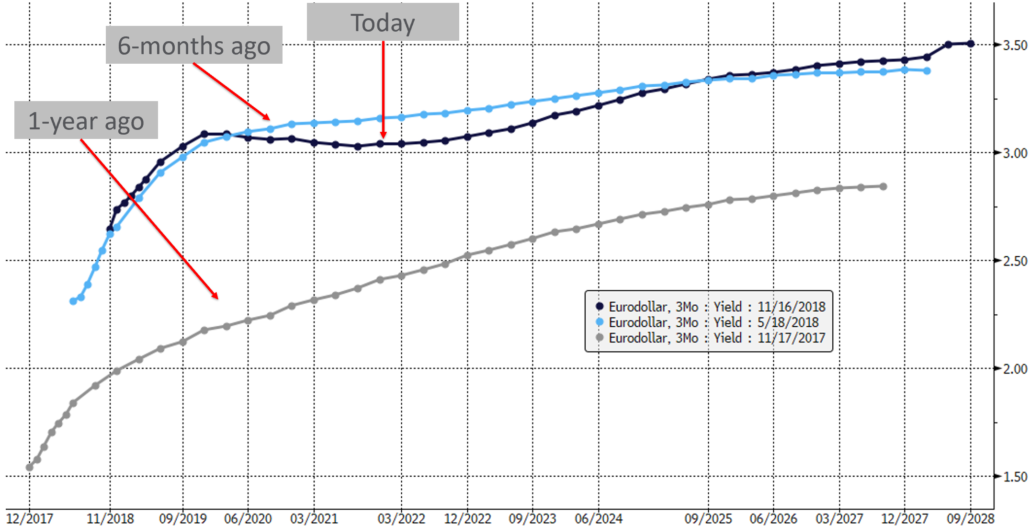