Markets Coming to Terms with Long Road of Hikes 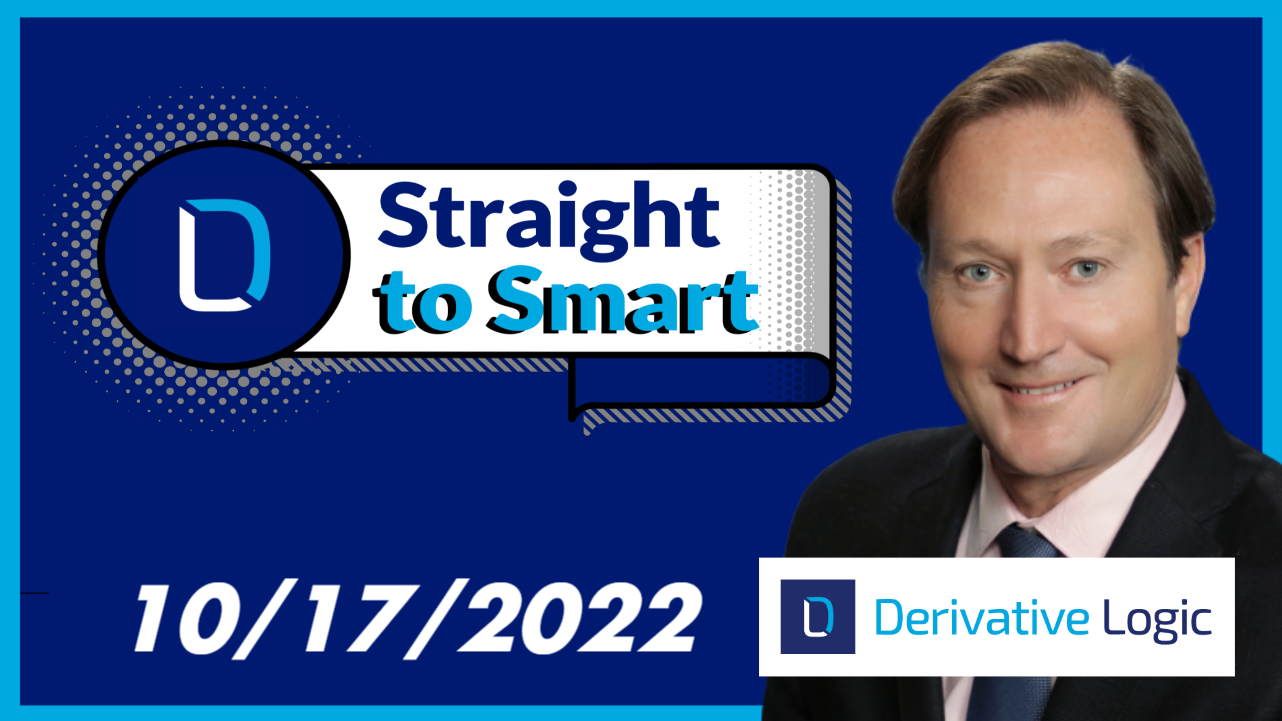 Yields across the entire Treasury curve rose anew last week, as higher than expected levels on inflation data reinforced the likelihood of continued aggressive rate hikes by the Fed.

For the week, the 2, 5, 10 and 30-year US Treasury yields added a respective 19, 10, 5 and 7 bps. The surge in yields – particularly for shorter maturities – reflects a galvanizing of speculation that the Fed will deliver back-to-back rate hikes of 75 basis points at both its November and December meetings.

Elsewhere, the price of a barrel of West Texas Intermediate crude oil slipped to $86.25 from $90.15, while the US Dollar strengthened, and Gold weakened. The US 2-year vs. 10-year Treasury yield spread,  a widely watched barometer of the likelihood of a looming recession, wrapped the week at -0.48%, easing back slightly from last month’s low, its most inverted level since 2000. Pro-tip: To learn more about what inverted yield curves mean, click here.

Our take? While Treasury yields have occasionally declined on hopes that the central bank may scale back its planned rate hikes, such declines have proven fleeting as Fed officials have stuck to their hawkish script, even after raising the target Fed funds rate by 75 basis points for three consecutive meetings and signaling at least another 125 basis points of hikes at its remaining two meetings this year.  There are no indications of a Fed about-face, and there are no significant data releases scheduled for the upcoming week that could change the conversation regarding the Fed’s path.

Bottom line? As we’ve been saying for weeks now, barring a 2008-style, Lehman Brothers moment 2.0, the Fed won’t be easily dissuaded from hiking sizably in November, and again in December. Short-term Treasury yields, and SOFR along with them, are likely to keep heading higher over the coming weeks. In the meantime, the rates market will continue to experience periods of positioning shifts and heightened volatility, equating to expensive rate hedges.

3-month (CME) Term SOFR, a useful gauge of hedging costs, increased ~15 bps last week to 3.93%, a new high for the three-year old index. The implied yield on the 3m SOFR futures contract 1-year forward (October ‘23) rose a whopping 20 bps from this time last week to 4.59%.  The Mar ’23 futures contract continues to have the highest implied yield for the 3-month SOFR index at 4.94%, implying that market participants expect that 3-month SOFR will peak in the next 6-months – along with the Fed Funds rate – followed by a gradual decline over the next three years as the Fed eventually eases.

Hopes that US consumer prices had peaked were dashed last Thursday when the core annual inflation reading – which excludes volatile food and energy components – rose to 6.6% last month from 6.3%, the highest level since August 1982, and miles away from the Fed’s 2% inflation target. The headline figure fell to 8.2% year over year in September from 8.3% in August.

Buried in the data was evidence that prices for services, as opposed to goods, are surprisingly robust, growing at a monthly pace of 0.8%, the fastest monthly gain since August 1990. This confirms the Fed’s fear, as indicated in minutes of the Fed’s September policy meeting, that businesses are passing through higher wage costs into final prices. Additionally, the cost of housing, a big driver of the long-term inflation trend, grew at the same strong 0.7% monthly rate as in August, and isn’t expected to peak until the first half of 2023.

Our take: The plateauing, 8.2% annual headline inflation rate is likely the best inflation news we’ll get for a while. The upside surprise in the core-reading, and the fact that we’re now seeing inflation in services, along with a looming rise in gasoline prices, adds to the growing probability that inflation pressures won’t moderate in any real way for a long while. The dynamic will make it very difficult for the Fed to communicate any deviation from its rate-hike pace this year.

Taking it all together, it seems that the Fed’s concerns over more persistent inflation are outweighing its worries of sparking an economic downturn. That stance will come under increasing pressure as the consequences of higher rates inflict real damage on the jobs market, which will come in time.

What to Watch This Week – Mixed Signals

The coming week’s data will provide contradictory signals regarding the health of America’s economy. Industrial production (Tuesday), a backward-looking indicator for September, is likely to show robust activity. Orders and capital spending indices from multiple regional surveys (Empire State on Monday; Philly Fed on Thursday; Beige Book on Wednesday) will likely show that businesses are downgrading their longer-term outlook, consistent with recent studies showing that while households’ assessments of their situation have greatly improved, their outlook on the future has become more pessimistic.

Elsewhere, recent trends in the housing market are troubling. With 30-yr fixed mortgage rates recently rising to a 16-year high of 6.9%, and likely to move higher as the Fed hikes further, housing affordability has taken a hit. Home sales have plunged in recent months (existing home sales, Thursday), and with many new homes in the pipeline, supply may exceed demand soon. Unsurprisingly, housing construction (NAHB, Tuesday; housing starts, Wednesday) has downshifted.

While interesting to consider, this week’s data won’t dissuade the Fed from hiking at least 75 basis points at its next meeting on November 2nd. Inflation is just too high, and inflation expectations too vulnerable to rising gas prices for the Fed to deviate anytime soon.

Sticky and persistent inflation could prompt the Fed to hike beyond what markets currently expect, hiking by 75 basis points at each of the final two meetings this year, then another 125 basis points spread out through the first half of 2023. Such moves would handily push the 2-year Treasury yield above 5%, and longer-term yields, like the 10-year, would eventually decline amid a recession.

There are some topics that seem to have eternal importance in today’s sea of quickly changing narratives and sentiment. The credit market is near the top of the list. After all, everything pretty much stops when the flow of credit stops. Unsurprisingly, there are a lot of cracks in the speculative credit market globally at present, but they don’t appear to be irreparable at this time, at least not in the US.

Unsurprisingly, spreads have widened significantly this year, but in the US at least, they aren’t yet signaling the beginning of a major downturn in the US economy. A measure of high-yield credit spreads that dates back to the 1980s has tended to widen to 10%-plus before, during, or just after each of the past few recessions. While we’re not close to that threshold at the moment, financial conditiones have ceraintly tightened, but not enough to totally smother economic growth when looking back over the previous few eocnomic cycles – yet. It’s a dynamic that’s definitely worth keeping an eye on.

Pulling back to view the global tumult that’s enveloping us all, we expect the US economy to emerage a winner when its all said and done. US financial assets – stocks and bonds – will lead the way out of the current wave of turmoil. China will likely follow, given a successful navigation its strict COVID policy. The Fed will be the first to halt its series of rate hikes among the global central banks, allowing the US economy to recover ahead of other nations. 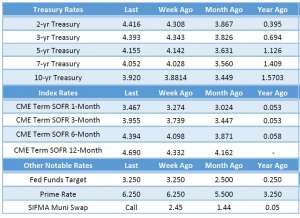 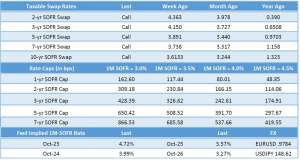 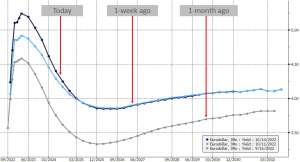 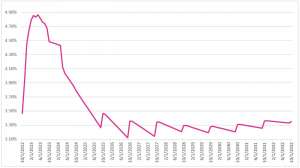 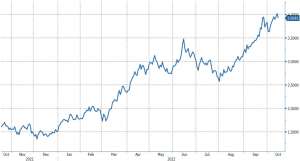 Markets Cave To The Fed
Scroll to top