Last Week: Interest rates and equities fell as trade jitters intensified and concerns over growing signs slowing global economic growth drove investors’ quest for shelter. The yield on the US 10-year Treasury note declined 15 basis points to 2.12% – the lowest level since September 2017. 1-month LIBOR, after some mid-week gyrations, finished about where it started at 2.43%. Oil fell over $3 to $54.90, as the US Dollar and Gold both strengthened on the back of investors flight to safety. Treasury yield volatility spiked to 5.61 from 4.66 this time last week.

Fire sale on Rate Caps and Swaptions. As we’ve said previously, the combination of falling interest rates, muted rate volatility and flattening yield curves offer you a big opportunity that hasn’t been seen in years: ultra-cheap interest rate caps and swaptions. As an example, a $30M, 3%, 3-year rate cap cost $246K six-months ago, $88K a month ago, $52K a week ago, and $33K now. How to best take advantage of the situation? Consider buying a rate cap now if you’re: 1) Facing a loan extension and need to replace the original, but soon to expire rate cap, 2) Planning on closing a new loan in the next 60 days that requires a rate cap, 3) Partially unhedged on an existing loan, 4) Open to the idea of putting on a strategic hedge for your floating rate debt portfolio. A similar situation exists for swaptions now. Contact us for pricing and structuring ideas.

President Trump opened a two front trade war. China and the US traded barbs as hopes for a quick resolution of the ongoing trade battle dimmed further. We won’t bore you with details of the tit-for-tat exchanges; just know that it seems that through the veiled threats both sides want a deal to happen. While there are no negotiations planned, all eyes now look to President Trump and Chinese President Xi Jinping’s talks on the sidelines of the G20 meeting in Osaka, Japan at the end of June.

Opening a second front to the trade war, markets were jolted Thursday evening by President Trump’s announcement of the imposition of a 5% tariff on all US imports from Mexico beginning on June 10th unless Mexico does more to discourage the flow of Central American migrants seeking US asylum. The tariffs are set to rise 5% each month until reaching 25%. Markets have taken the news badly, fearful that highly integrated North American supply chains could be disrupted, and US corporate earnings could be negatively impacted. The move doesn’t give China confidence that it can trust any deal it makes with President Trump, given that Mexico agreed to a trade deal with the Trump administration last year (remember NAFTA 2.0?), only to have tariffs imposed against it regardless.

While we expect that both fronts of America’s trade battles will be resolved eventually, the question now is how much US economic growth will suffer in the meantime and what the Fed will do to mitigate it.

The Fed opened the door to the possibility of a rate cut. A key Fed official commented that even though America’s economy remains solid, should inflation remain below expectations and global conditions worsen, the Fed could change its “patient” approach. Markets are already planning on it, having priced in three rate cuts (two before year’s end and another early next year) on the back of slowing global growth, increased trade tensions and below-target inflation readings around the developed world. It’s what’s becoming a Markets vs The Fed extreme scenario, there could be a showdown ahead.

Though inching higher, inflation remains tame for now. The Fed’s favorite inflation measure, core personal consumption expenditures, rose 1.6% year-over-year in April, from 1.5% in March, but remains well below the Fed’s 2% target. Tame inflation and slowing global growth have prompted calls for the Fed to cut rates.

US GDP was revised slightly lower. The second estimate of US gross domestic product for Q1 of this year was 3.1%, down from 3.2%. One-off factors like an improvement in net exports and rising inventories contributed to the strong start to the year.

What to Watch this Week: Awaiting in the days ahead are a couple of pivotal economic releases – on manufacturing and employment – that could either cement the “solid US economy” narrative or turn it on its head. First in importance is the May jobs report, set for release on Friday. Increasing signs of a slowdown in business activity means that the almighty US consumer will be the primary engine of economic growth over the next few quarters. As such, markets will look to jobs gains, hours worked and wage growth for evidence that households will have the ammunition they need to keep the consumption engine humming. We expect 200K in new jobs, the unemployment rate to remain unchanged at 3.6%, and wages to show respectable but muted growth.

Recent data signaled that personal spending is rebounding soundly from a Q1 soft patch, likely enough to achieve 2% GDP growth in Q2. While far lower than Q1’s 3.1% growth, 2% isn’t bad. As we’ve said many times before, if you want to make America great again, go buy something you don’t need.

Second in importance on the economic data front is Monday’s ISM manufacturing data for May, which was just released this morning. While the broader US economy has performed well, America’s factory sector has suffered notably in recent months, weakened by slower growth, spiraling trade frictions, the strong US Dollar and a sizeable inventory overhang. Forecast at 53, the ISM manufacturing index came in at 52.1, showing a cooling, but not contracting, in conditions in the factory sector (a reading below 50 would show that the Factory sector is indeed shrinking). Given that most of the survey responses were collected prior to the latest round of tariff escalation, we could see another down leg next month. Why it matters: All told, this morning’s ISM reading corroborates other economic signals in pointing to slower growth in 2019 relative to 2018, further eroding any reasons for the Fed to hike anytime soon.

Outside of economic data, markets will look to a slew of Fed-related speeches and events, where Fed officials will be pressed to elaborate on the economic and financial market thresholds that would prompt a rate cut. While we still expect the Fed to hold firm to their “patient” message for now, any significant sell off in equity markets and/or trade-war driven jump in inflation could change our mind in a hurry.

Take-Away: The market’s current expectation of three rate cuts in the next year and the Fed’s no-change mantra are miles apart. The chasm between the two is becoming extreme, and something will have to give soon. While a Fed rate cut is one possible catalyst to bring the imbalance in line, resolution of the multi-front trade spat is also a possibly. Due to its political nature however, the timing of resolution is difficult to predict.

If history is any guide, a Fed rate cut is becoming all but inevitable. Except for the 30-year section of the yield curve, all the other parts, e.g. the 2-year, 3-year, 5-year and 10-year Treasury yields are all now all below the 2.50% Fed Funds rate target. Since 1976, when so many parts of the Treasury yield curve stayed below the Fed’s rate target, the Fed cut rates response. The most recent times when this happened were in 1995 and 1998. Should the trade wars persist – which we expect – the overarching question will be if we enter an outright recession or enter a slowing-growth, Fed-engineered economic soft landing like what was seen in the 1990’s. One telling sign: History has also shown that once the 30-year Treasury yield (now at 2.57%) fell below the Fed funds target (2.50%), a recession soon followed. We’re 7 basis points from that right now. 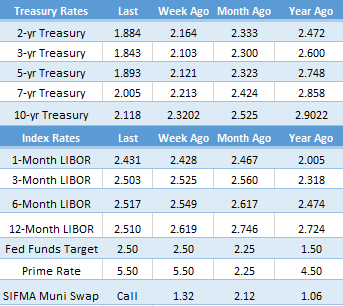 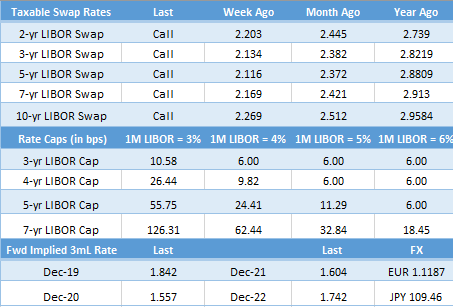 Click here for more DL Reports
Impact on Rates: Lessons from the Trade War So Far