Last Week: Interest rates and equities fell after a one-two punch from ongoing trade frictions and fresh signs of slowing global growth. The yield on the US 10-year Treasury note declined to 1.54% from 1.70% a week ago, its lowest level in three years, while 1-month LIBOR forged a similar path, falling to 2.17% from 2.19% this time last week. Oil prices were little changed, with a barrel of West Texas Intermediate crude rising $0.60 to $54.85. The US Dollar strengthened as Gold traded flat. Treasury yield volatility rose slightly to 5.94, higher than the 5.77 seen this time last week.

Global bond yields continued to tumble. With US 10-year notes falling to their lowest level in three years, German, British and Japanese yields all fell to record lows. The US 30-year bond yield fell below 2% for the first time ever, and the world’s pile of negative-yielding debt just surpassed $16 trillion in size. With nearly every developed economy’s government bond yields headed notably lower over the past couple of weeks, we’re wondering just how low they’ll go below zero or how close they’ll approach it.

A closely watched yield curve inverted – an omen for recession? Nurtured in recent weeks by worsening US-China trade relations, mounting signs global growth is slowing, and a recent slew of sloppy Chinese and German economic data, the spread between the US 2-year Treasury note and the 10-year note fell below zero (aka “inverted”) for a time last week, setting off recession warning bells. While the financial news media loves to hype up the situation, it’s important to remember that the inversion is not yet persistent, and in the past five such inversion episodes, the onset of recession averaged 22 months after inversion. However, the more a recession is discussed, the greater the risk that it becomes a self-fulfilled prophesy. Our view? Resist the hype. Recession risks are exaggerated. Most of the panic evident from the fall in US Treasury yields is being imported from China and Europe’s darkening economic picture. There’s little evidence in US economic data to suggest a recession is imminent.

Small signs of progress on the US-China trade front.  Markets were relieved midweek as the Trump administration announced it was delaying the imposition of tariffs on several categories of imports from China until after the holiday season.  Unfortunately, the olive branch didn’t dissuade China, which responded by announcing that it intends to take necessary countermeasures to match the US tariffs. Face-to-face negotiations are expected to resume within two weeks, and China has asked the US to meet it halfway on trade issues. However, President Trump said that a trade deal needs to be reached on “our terms,” though he said he believes the trade war won’t go on much longer, noting that US and Chinese negotiators have re-opened lines of communication. Sick of hearing about the US-China trade squabble and wish politics would get out of the way? Us too. Here’s the bottom line: Ahead of the trade war re-escalation, the economy was on solid footing, having enough cushion to withstand global and financial markets headwinds – so long as the jobs market remains unaffected. Restricting trade imposes costs on businesses and consumers and eventually stunts growth in the economy. The billion – dollar question now is just how much we’ll gain from all the trade-war induced volatility we’re all experiencing and how much collateral damage will be inflicted in the meantime.

Rate Caps and Swaptions remain attractive. The recent volatility in rates would normally make these type of hedges look ugly, but the dramatic fall in rates overall has largely offset it. Both remain attractive ways for some borrowers to sleep at night knowing they’ve limited any damage an eventual rise in rates would cause, but also smile while doing so knowing they’ve positioned themselves to benefit from falling rates in the near term.

US economic data showed relative resilience.  Core retail sales expanded 1% in July, more than anyone expected, showing broad-based strength in discretionary spending by individual consumers. The data showed that consumers – not businesses – will remain the driving force behind economic growth for the remainder of the year unless financial market volatility dampens consumers’ spirits and willingness to keep buying stuff. On the flip-side, industrial production slipped in July showing that America’s manufacturing sector remains challenged. The manufacturing situation is likely to be exacerbated by more market volatility and any further imposition of tariffs.

Expectations grow for aggressive European stimulus package. Anticipation of an aggressive package of economy-boosting measures from the European Central Bank (ECB) is helping fuel the global fall in bond yields. ECB officials mentioned that the central bank could even purchase stock in public companies as part of its quantitative easing program, a once-unthinkable prospect.

What to Watch This Week: Amid a mostly blank US data calendar, events mostly outside of the US will drive interest rates in the days ahead.  There is one domestic event that will capture the spotlight however: Fed Chair Powell’s speech on Friday at the annual Jackson Hole Economic Policy Symposium. Markets will parse every word for clues that the Fed will continue to support the economy via rate cuts, and if its willing to shift from “insurance” rate cuts to a full-blown easing cycle if needed. The massive fall in 10- and 30-year Treasury yields suggests that markets are skeptical that Fed rate cuts alone will be enough to boost growth and inflation. With rates already low, the Fed is running low on ammunition.

In the meantime, will we see new lows in US yields this week? The chances of such is largely dependent on the performance of equity markets, which are in turn beholden to the prospects for an easing of global headwinds, specifically in terms of the economic outlook and the US-China trade war. We don’t expect much change from the current situation, as these issues will take a long time to evolve.

Take-Away: It’s beginning to look like trade tensions, which have been a persistent dog on the economic outlook, may now be seeping into the core of America’s economic growth – the jobs market. While we expect the impact to be muted, the constant trade policy see-saw is dulling the shine of the economy’s growth prospects.  The recent decision to delay new tariffs from September to December – intended to protect consumers – also raises trade policy uncertainty. It’s a move that could backfire, eventually weighing on business hiring plans and hurting wage growth. Last week’s 2yr-10yr Treasury yield-curve inversion and the stock market’s tumble is a clear sign that markets haven’t been placated by the tariff delay.

Despite the anticipated growth slowdown, we believe we’ll avoid recession as job growth slows but remains strong, keeping unemployment low and consumer spending robust, which will serve as the main growth engine as growth in other sectors of the economy fade.

In the meantime, another 0.25% Fed cut at its next meeting on September 18th is looking highly likely.  With financial markets now pricing in a rate cut at each of the three remaining Fed policy meetings this year, and the 10-year Treasury yield hovering between 1.5%-1.6%, it looks as if the 2yr-10yr yield curve inversion will become more persistent if the Fed doesn’t cut. Even though its recession-predicting ability is debatable, a prolonged yield curve inversion will cast the Fed in a negative light, and the Fed is keen to avoid being perceived as repeating its policy mistakes of the past. 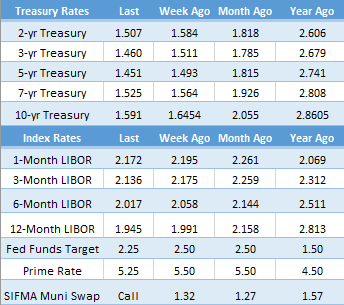 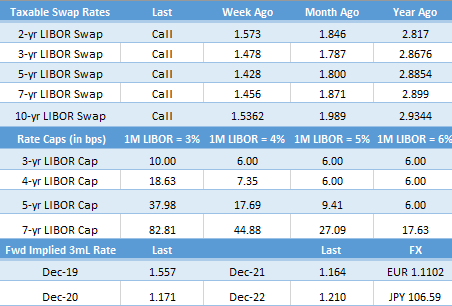 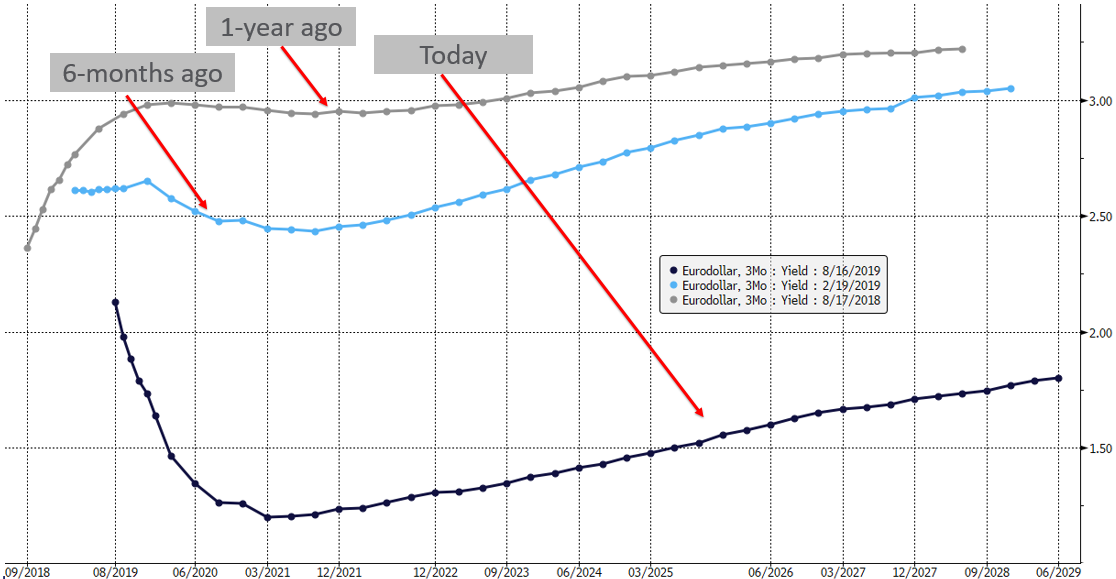 Click here for more DL Reports
Coming to a Central Bank Near You: QE-lite

Is your Floating Rate Loan Really a Fixed Rate Loan?
Scroll to top