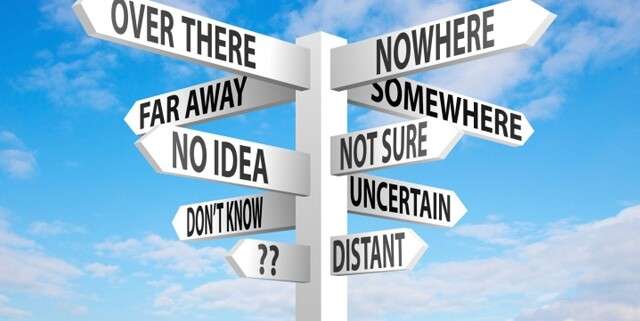 Last Week: Interest rates and equities traded modestly lower on the week as markets seesawed in response to the seemingly never-ending “will they or won’t they” state of the supposed looming US-China trade agreement. The yield on the US 10-year Treasury note declined 6 basis points to 1.77%, while 1-month LIBOR followed suit, drifting lower by three basis points to wrap the week at 1.7080%. Crude oil rose $1.25 to $58.40, as the US Dollar strengthened, and Gold weakened. Treasury yield volatility fell slightly to 4.11 from 4.48 this time last week.

US-China Trade negotiations barrel toward a key roadblock: More tariffs.  Fixed income markets remain fixated on any sign of progress – or lack thereof – on the trade front. The market’s sensitivity will become even sharper over the coming weeks as the Trump administration’s mid-December deadline approaches for another round of tariffs on Chinese goods. Will the President choose to delay in the spirit of making a deal? That’s anyone’s guess. One thing’s for certain: the US and China are miles apart from agreeing on the size of any tariff rollbacks as well as structural issues such as intellectual property protections, points that will likely take months to work out, if they can ever be at all. Treasury yields have responded accordingly.  After a sudden spike higher early in November based upon now mostly dashed hopes for a near-term trade deal, Treasury yields have almost fully reversed their climb, steadying to 1.77% from a high of 1.94% on November 8th. The recent mixed messages on trade from both country’s leaders tells us that US-China trade talks are going nowhere, that US treasury yields are on a range bound path, and will thus keep the yield curve flat until some semblance of an agreement is reached. Even with a breakthrough in trade talks between the two countries, we doubt the 10-year Treasury will soon knock again on the door of 2.00% given the Fed’s lack of conviction in hiking or cutting rates anytime soon. The result? Treasury yields stuck in ranges over at least the next couple of weeks.

Fed to negative interest rates: NIMBY. The minutes of the October Federal Open Market Committee meeting showed that most participants judged policy to be well calibrated, and evidenced firm resolve to avoid cutting rates further in December, though they remain focused on downside risks. Most importantly, the broad support by officials for a December pause in rate cuts gave them an opportunity to ponder the usefulness of alternative ways of stimulating the economy, like Japanese-style yield curve controls and the viability of negative interest rates. Both were dismissed categorically. Reading between the lines, it seems that the Fed’s focus on ways to provide economic stimulus beyond cutting rates to zero tells us that the Fed has a significant bias toward additional easing over the long run, and similarly implies a high hurdle for the Fed to pivot back toward a tightening mode.

Manufacturing sectors continued to stabilize globally, but the devil is in the details. Economic data releases showed a trend toward stabilization in the global manufacturing sector in recent months that continued in November. Data improved in the US, Europe and Japan, with Germany a bright spot in particular. The UK was an exception, with both the manufacturing and services sectors contracting in November amid ongoing Brexit uncertainty. Despite the improvements in the big picture, details in the US data paint a picture of more pain in the near-term, but a brighter picture over the long-term. New orders and product shipments fell sharply, growth in employment was less broad and plans for new capex declined. Why you should care: a strong US Dollar and greater slack in the manufacturing sector will put a lid on the recent rise in core consumer goods prices, despite upward pressure from trade tariffs. All told, it allows the Fed to remain “on hold” amid low inflation pressures.

New ECB Chief pledges continuation of low rates in Europe. European Central Bank (ECB) President Christine Lagarde echoed her predecessor Mario Draghi in her first speech since taking leadership of the central bank last week, saying monetary policy will continue to support the economy. Like Draghi, she called on the European governments with room to increase fiscal outlays to increase their spending. What it means for US rates: The ECB’s continuing moves toward throwing everything but the kitchen sink at the European economy to foster growth serves as a drag on US Treasury yields from moving markedly higher anytime soon.

What to Watch This Week:  Beware your annual tryptophan-induced, post-Thanksgiving feast stupor. The first half of this holiday-shortened week is crammed with important data and events, which will mostly serve to shed light on the state of the all-import US consumer in supporting US economic growth.

Amid a chock full slate of data on home sales, durable goods orders, the first look at economy-wide corporate profits and revisions to Q3 GDP, the focal point of the week will be firmly on consumers, just as Black Friday marks the official start to the holiday shopping season. Specifically, data on consumer confidence, personal income and spending, jobless claims and retail anecdotes from the Fed’s Beige Book will provide clues on the likelihood that holiday shoppers will keep the economy humming.

Given that there has been little contribution by businesses to America’s growth in recent quarters, the US consumer is more important to America’s economic fortune – and the direction of interest rates – than ever. Especially since they’ve showed diminished momentum of late: vehicle sales have disappointed, retail sales are lackluster, and consumer sentiment and confidence in the future have cooled relative to where they were mid-year.

The risk is that households will continue to maintain an elevated savings rate, which in turn will manifest not only a weak quarter for consumers, but also an exceptionally weak quarter for overall GDP growth. As such, we’re watching two gauges more than others this week: consumer spending and GDP. If real consumer spending appears to be falling short of a 2.4% pace in the current quarter, then we’d expect that the consensus GDP forecast of 1.7% will be at risk. If GDP falls short of 1.6% – which is entirely possible given the recent spate of sub-1% readings on various GDP tracking estimates – then the resolve of the Fed’s “on hold” position will come into question. Should such occur, it’s a recipe for rates to remain rangebound or slide lower in the near term.

For all you data junkies out there, here’s some interesting information on the state of the consumer:

Beyond economic data, a Fed on hold and seemingly abating trade tensions is giving us confidence to eliminate the word “recession” from our vocabulary, as the healthy consumer should keep the economy from a downturn. That being said, if cracks in our views were to occur, they’d be prompted by:

Take-Away: When the Fed cut rates back in October, events outside of the US – like trade, geopolitics and a no-deal Brexit – were cited as some of the big reasons why. Now that those factors have evolved positively, the risk of a global growth slowdown weighing on the US economy have dissipated somewhat. In response, markets have recently priced out those “tail risks”, but have not yet priced in the ensuing prospects for sturdier global growth.

We expect that growth signals, both for the US and globally, will look increasingly better next year. As economic activity finds its footing, the Fed may be on hold for far longer, likely well into mid-2020, and will slowly but surely adopt a hiking stance late into the year. However, muted global inflation pressures and on-hold central banks will keep Treasury yields from rising markedly in most of 2020, that is until markets price meaningful odds of Fed rate hikes, a scenario that still seems far off. For more on our rates outlook for next year, look for our formal publication in early January. 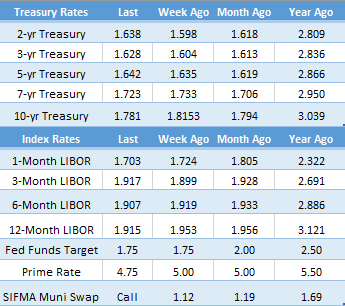 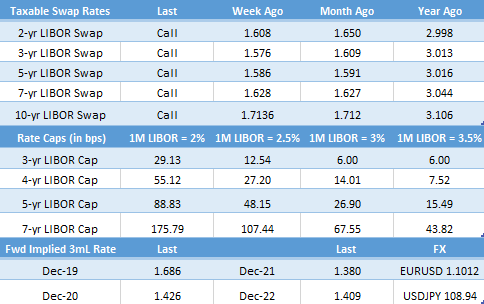 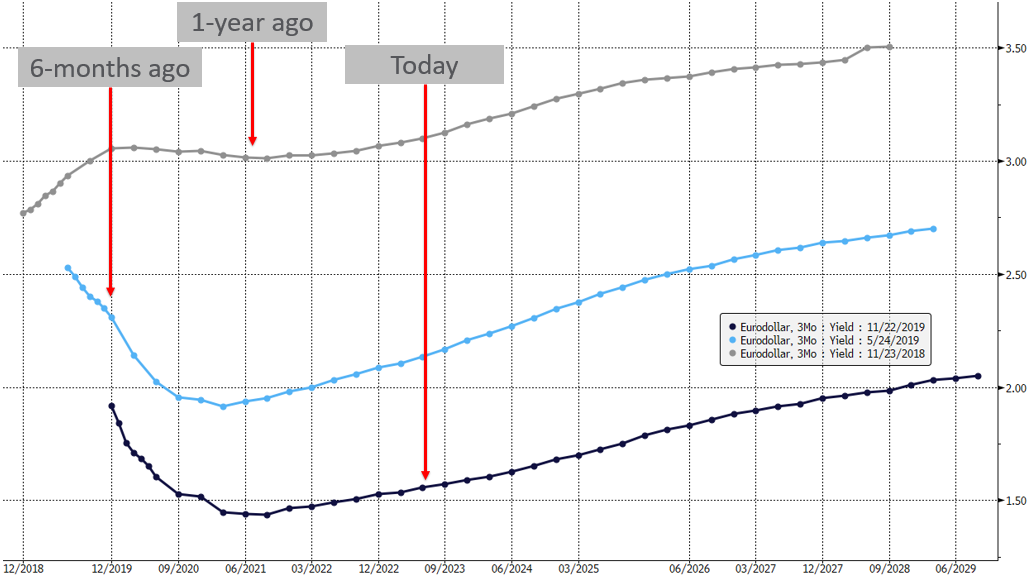 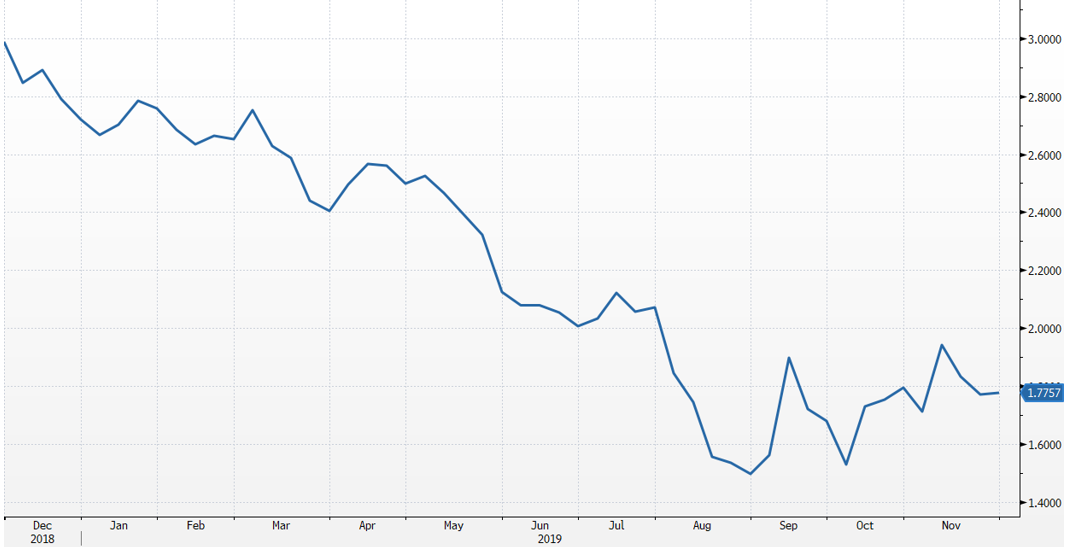