Last Week: Interest rates and equities extended their gains amid signs the global economic expansion continues apace. US tax reform hopes and record-high equity indices helped fuel a rebound in US Treasury yields, which saw the yield on the 10-year note rise 11 basis points to 2.38%. 1-month LIBOR followed the 10-year’s move higher, climbing to 1.2378% from 1.2366% the week prior. Oil prices held steady, the US dollar rallied and Gold fell. Market volatility, as measured by the Chicago Board Options Exchange Volatility Index (VIX) was unchanged at 9.9.

Fed believes America’s Economy will expand despite hurricanes. In its most-recent Beige Book, a report prepared ahead of each of the Fed’s monetary policy meetings, said that the US economy continues to grow at a modest to moderate pace despite some disruptions from a series of hurricanes. Labor markets remain tight, with employment growth modest, according to the report. The Fed termed inflationary pressures as modest. Market consensus expects one more rate hike from the Fed before the end of the year, probably in December.

China’s National Congress began. China’s 19th Communist party congress began in Beijing, kicking off with a three-and-a-half-hour speech by President Xi Jinping. Economic reform took a back seat to the theme of national rejuvenation in the speech. Xi will be given a second five-year term atop the party at the end of the meeting. China also reported that its economy grew at a 6.8% annual rate in the third quarter, down a touch from the 6.9% pace registered in the first two quarters of the year. Why should you care? China’s National Congress meeting – which occurs every five years – sets the country’s economic priorities for the near future. Given that China is one of the largest holders of US Treasuries, any unexpected change in its economic policy could have an impact on US Treasury yields. While we don’t expect any significant change in China’s appetite for US Treasuries anytime soon, history has shown that it pays to pay attention to China’s economic plans.

What to Watch this Week:  Markets are becoming increasingly attuned to the increasing drip of news relating to President Trumps choice of the next Fed Chair, and have already shown their sensitivity to rumors of each candidate’s changing prospects. The news flow will likely increase this week, and could move markets in unpredictable ways. Despite the unknown, key economic data releases on durable goods orders and the Q3 advance GDP report will take the data spotlight. Despite expectations for a strong showing for durable goods orders due to the hurricane-induced reconstruction process, most expect this week’s read on Q3 GDP to be lukewarm, near 2.3%, as much of the inputs to the GDP gauge have been deemed unreliable due to hurricane disruptions. While interesting, it’s unlikely that the growing Fed Chair rumors nor data releases this week will alter the market’s belief, currently standing at a 83% probability, that we’ll see a 0.25% rate hike in December.

Take-Away: The 10-year Treasury is suddenly closing in on the psychologically significant 2.40% level again, currently trading at 2.37%, up from 2.30% this time last week.

What’s going on? The 10-year jumped 11 basis points last week as speculation grew that the next Fed Chief will be more hawkish (more inclined to hike rates rather than lower them) and as President Trump made progress towards tax reform. Should you expect a higher 10-year yield going forward?  It seems that many professional bond traders are, as option positioning for a break higher has grown in recent days. Other, more convincing drivers are signaling that we’ll see the 10-year over 2.40% soon: A recovery in retail sales, industrial production and builders and manufacturing sentiment in the wake of the hurricanes are supporting the belief that America’s economy is on solid-footing, inducing investors to lighten up on the safety of Treasuries and seek higher returns elsewhere, like real estate, equities, and commodities. The Senate’s recent adoption of a fiscal 2018 budget resolution has also provided a tailwind. What could derail a continued rise in 10-year yields? A string of bad economic data, the announcement of a notably dovish Fed Chair, or a crash and burn of Trump’s tax reform hopes. Only time will tell. 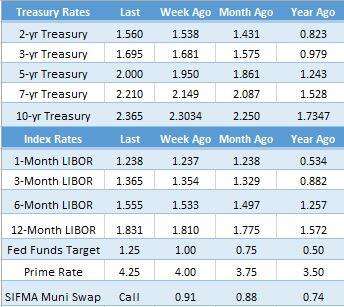 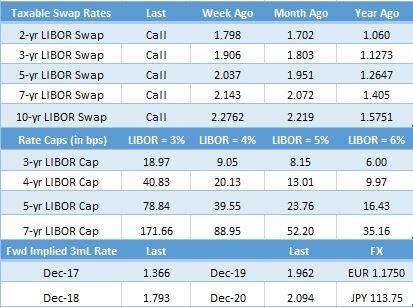 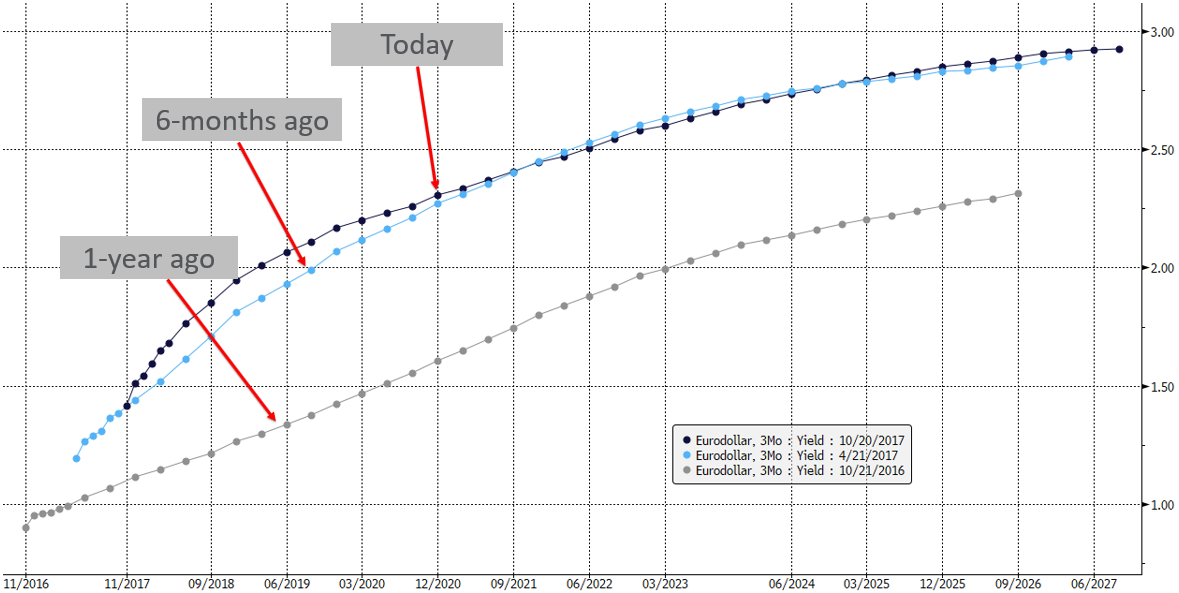