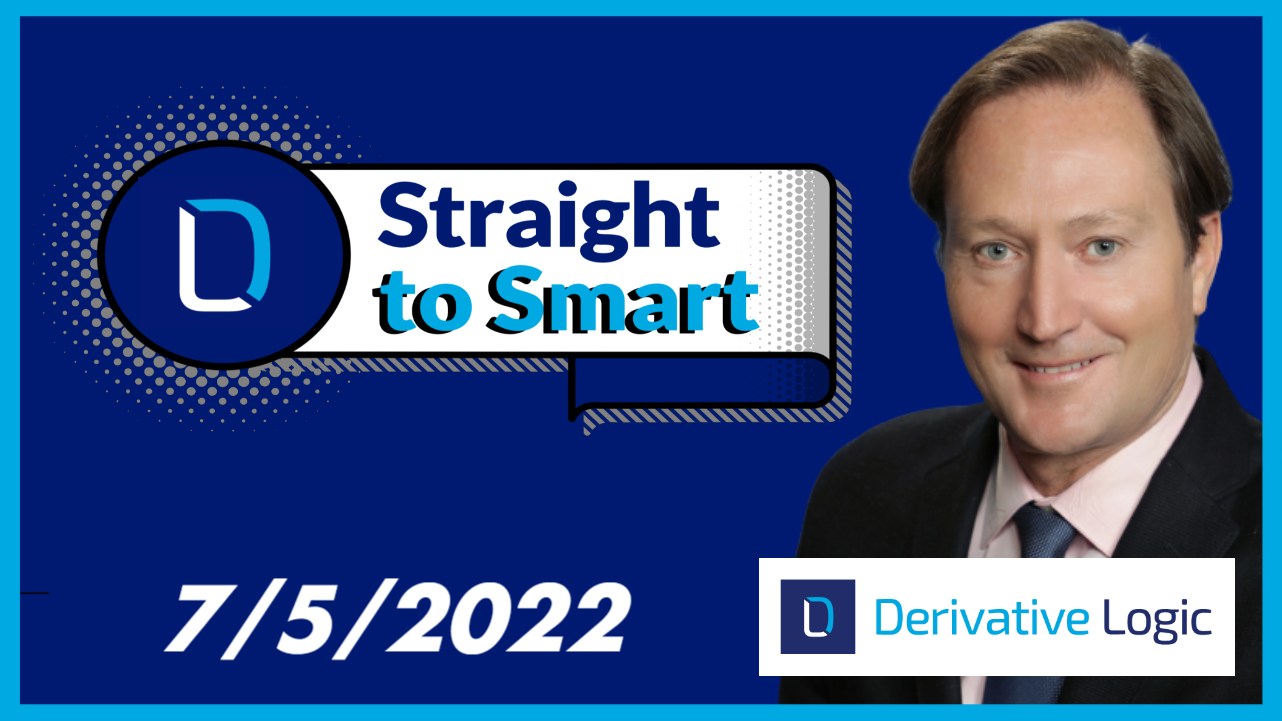 What You Missed: Last week’s data included a decline in consumer confidence to levels last seen during previous recessions. In response to Fed Chair Jerome Powell’s ominous warning that the Fed’s fight against inflation will “highly likely involve pain,” data on both household spending and factory production contracted. If more of the same follows, we expect the Fed to hike the Fed Funds rate 50 basis points, rather than 75 basis points, on July 27th.

Both long- and short-term interest rates fell, joined by steep drops in equities, which concluded the worst first half of a year for the S&P 500 Index since 1970. The moves were the result of omni-present inflation fears, looming Fed rate hikes and the growing threat of economic recession. The 10-year note fell to 2.87% from 3.09% a week ago, joined by similar declines in the 2 and five-year Treasury yields, 1-month LIBOR and Term SOFR. Elsewhere, the price of a barrel of West Texas Intermediate crude oil rose $2.25 to $107.75, as the US dollar strengthened, and Gold weakened. Treasury yield volatility, a key but hidden driver of the cost of rate caps, rose markedly, approaching a 2-year high.

Is Now The Time To Defease? Last week we introduced you Steve Morus, Derivative Logic’s Director of Defeasance Services. He helps our clients get free of their mortgage obligations when their loans have become part of an investment security, such as a CMBS.

We asked Steve if now is a good time to defease a loan. Steve: “Judging by the huge pick-up in the number of defeasances we’re seeing among CRE investors, then yes, now is big opportunity to consider. Although interest rates have already risen this year, there is widespread sentiment that inflation will force the Fed to hike rates even more aggressively. If you are thinking of selling or refinancing your property there is still a good chance you will save money over the long term. As an added advantage, when interest rates are higher it costs you less to purchase the portfolio of Treasury bonds you need. You get more bang for your buck. Taken together, conditions are in a sweet spot. At least it seems that way for many of our customers. We’re closing more defeasances than ever before. But we can still close more!”

Data paints an ominous picture for the second half. The final revision to US GDP data for Q1 revealed that America’s economy contracted at an annual rate of 1.6%, slightly worse than expected, and the worst rate of growth since 2009. A portion of the revision was attributable to a lower estimate of US consumer spending, which grew at a 3% annual rate during the quarter, down from 3.7% in the previous revision. Elsewhere, as measured by the Conference Board, consumer confidence plummeted, primarily due to households’ pessimism about the future. The gap between the expected-and current-conditions indices, which has historically been a strong predictor of recessions, is currently at or below the level observed during previous recessions. Don’t take the Conference Board’s recession leading indicator lightly; since 1960, it’s been a very accurate as a recession predictor, making only two false calls, one in 1969 and another in 2006. In both cases, the economic contraction started months later.

Finally, the Institute for Supply Management’s US manufacturing purchasing managers’ index fell to 53 in June, from 56.1 in May, as the new orders and employment subindices entered contraction territory. The data indicate that production bottlenecks appear to be finally resolving themselves. Nonetheless, the report is further evidence that the US economy continues to slow. Taken as a whole, the manufacturing data contained some optimism regarding the near-term economic outlook, as any reading above 50 signals manufacturing growth. Even still, while any sub-50 readings seen in the months ahead for orders and employment imply a contraction, they aren’t necessarily fool-proof recession signals.

Our take: The Fed’s threats of higher interest rates back in Q1 had their intended effect;  we’re now just beginning to see the impact on the always-important US consumer, who alone accounts for ~70% of economic activity. Buckle up, as the worst of the GDP and consumer spending data is yet to come; Q2 data will show even harsher impacts to consumer spending and confidence amid spikes in food and energy prices following the Russian invasion of Ukraine.

The continuing economic decline illustrated by the Q2 data will clearly demonstrate that there’s now less momentum for consumption and economic growth going into the second half of the year, as consumers likely pull back further on spending, high inflation weighs on purchasing power and consumer confidence in the future stays at record lows. Fears of recession are slowly but surely shoving inflation fears aside. The silver lining? It’s a scenario that will give the Fed pause and hike much less than the seven more times that the markets expect them to raise rates before year’s end.

What to Watch This Week: Given the recent gloomy economic data, markets are on edge, waiting and watching for clues on whether the pain has bled into the jobs market. As economic uncertainty ratchets higher, companies may become more circumspect about hiring and pay. If jobs data for June (on tap for this Friday) shows a jump in the unemployment rate, it would be another significant surprise for the Fed. Any weakening of the jobs market, typically a trailing indicator of an economic downturn, will put the Fed on alert that the jobs market is weakening faster than it was expecting, and that it may need to scale back its plans for rate hikes.

The unemployment number we’re watching for in this week’s data is 3.7%; a level of unemployment the Fed doesn’t expect the jobs market to reach until late this year. If we got there already in June, expect a 0.50% rate hike later this month as all but a sure thing.

As of this writing, markets still expect the Fed to hike rates another 0.75% this month.  We doubt it. The Fed is more likely to come through with just a 0.50% hike, as implied by recent Fed commentary and likely evidenced in the minutes (released this Wednesday) from the Fed’s June meeting.  We suspect that any Fed endorsements of a supersized, 0.75% rate hike were predicated on continued signs of economic overheating.

Recent data simply doesn’t show any evidence of that. Since the Fed’s June meeting, inflation and growth have surprised to the downside. The new-orders and employment components of the ISM manufacturing index are both decreasing, and the ISM services index (released this Wednesday) will likely also signal a significant deceleration. Personal spending recently fell more than anticipated. Gas and other commodity prices have fallen of late. Most importantly, the June rise in the University of Michigan’s gauge of long-term inflation expectations, which caught the Fed by surprise, and not in a good way, was nearly eliminated in the final reading, after revisions.

Big Picture: Though the Fed is probably a long way from ending its rate-hiking cycle, traders have already begun to price in several rate cuts later in 2023. The assumption that the Fed will hike interest rates by an additional 2%, but then immediately begin cutting them again, is gaining traction as a recession is increasingly considered a base case for many next year.

The fly in the summer rose’? If inflation remains potent and painful. That would dispel the hope for a rapid Fed rate cutting campaign in 2023. For now, the most recent reading of the Fed’s favorite inflation gauge, the core personal consumption expenditures price index, rose 0.3% in May, less than feared. On a year-over-year basis, the index edged down to 4.7% after topping out at 5.3% in February. Are we now turning the page on inflation? Probably not. Inflation will likely be stubbornly slow to decline toward the Fed’s 2% target – well below the nearly 8.5% annual rate we’re all living through now –  through 2023 as large, slow-moving inflation engines like rents are still accelerating.

All told, the situation implies that we’ll still see a series of successive Fed rates hikes over the months ahead, but fewer than what markets expect as the economy continues to surprise to the downside.

For rates, the big move higher in Treasury yeilds is probably behind us now. The short end of the Treasury curve already reflects the looming series of rate hikes that lie ahead and will probably stabilize going forward. The longer end of the Treasury yield curve could still see notable moves higher as the Fed engages in quantitivative tightening via slowly unwinding its balance sheet. That said, we doubt the 10-year Treasury will rise much above 3% in the near term. 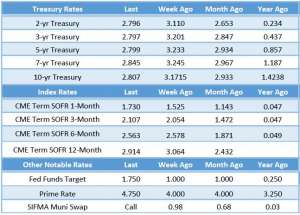 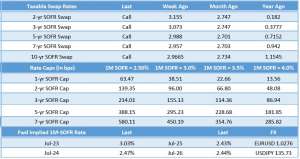 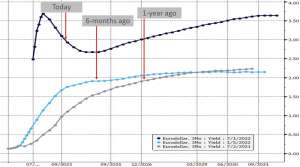 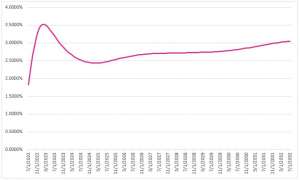 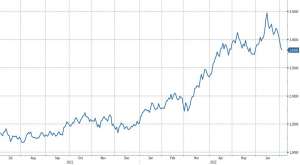 Click here for more DL Reports
Are We There Yet? Recession Signals to Watch