Last Week: US data and new equity market highs returned to save the day, as US retail sales, industrial production figures and solid corporate earnings overshadowed post-BREXIT fears. The week’s events largely revived the Q2 US economic rebound story, cutting back bets the Fed won’t hike until mid-2017 or later. The US bond markets performed in lock-step with the “risk on” theme, with the 10-year Treasury yield climbing 12 bps to 1.5509%, up markedly from its record July 6 low of 1.32%, as investors fled the safety of US government debt for riskier, higher-yielding alternatives. 1-month LIBOR rose 20 basis points to .4833, Oil rallied while gold fell.

This Week: It’s a quiet week overall, with few highlights – domestically or abroad – ahead of the Fed’s July 27 meeting. Most notable, markets will get a double dose of housing data this week, with the release of data on sales of previously owned homes and new construction data. While low interest rates are sustaining demand, high costs are blunting the speed at which residential real estate activity can expand. Both are expected to be flat from last month’s release, adding little to economic growth in Q2.

The European Central Bank (ECB) will get more attention than usual as it holds its first monetary policy meeting since BREXIT. The bank’s response to BREXIT and the teetering of Italy’s banking sector will be discussed, while an extension of its QE program and an increased limit of the amount of German bonds it can buy will likely be established. The measures enable the ECB to kick the can down the road ever further and weaken the euro in the process.

The corporate earnings season continues full throttle, with many companies posting financial results in the days ahead. With the S&P and Dow hitting fresh highs this past week, markets will be watching for signs the current equity rally is sustainable.

Take-Away: “BREXIT? What BREXIT?” seems to be the market’s sentiment at present as investors world-wide rush to buy risk assets with the belief that the world’s central banks will keep the party going with a new wave of easy money.

Despite the money printing-induced euphoria, the medium term outlook for the economy is largely dependent on the consumer driving growth.  Last week’s Retail Sales data showed America’s mighty consumer (responsible for 2/3rds of US economic activity) remained resilient through mid-year. The broad-based gains in many retail sectors suggests the consumer may be rising to the occasion and the big question now is if the current momentum carries over to the second half.

Taking a back seat to Retails Sales, last week’s Industrial production showed industrial and factory activity is flat so far this year. The bright spot was a notable increase in the production of consumer goods, implying a slight upward trend in consumer demand. On whole, manufacturing appears to be improving, and while not acting as a drag to economic performance, it won’t add the America’s economic bottom-line – an improvement from earlier in the year.

With the big moves in yields last week, we’re close to retracing the last Brexit leg lower in Treasuries, while equities and many major currencies have already made up their BREXIT driven losses. Despite the rush to risk assets and the positive data, we feel the combination of BREXIT, the European Union’s murky future, China’s slowdown and debt overhang, weak oil prices and Italy’s troubled banks will continue to overwhelm any positive news on the US economy. As a result, our outlook for the Fed, post BREXIT, hasn’t changed. It’s on hold through years-end. 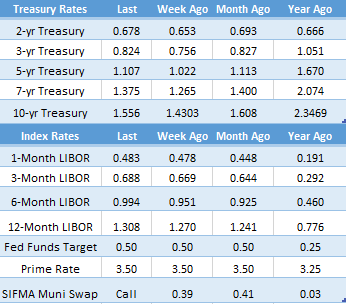 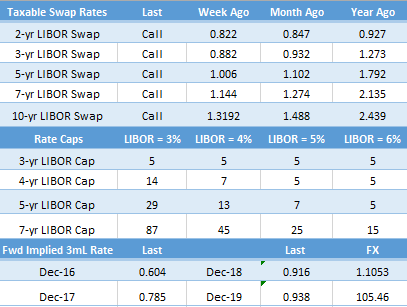