Last week: Interest rates were mixed as equities remained flat for the week. The 10-year US Treasury yield fell to 2.82% from last Friday’s 2.86%, while 1-month LIBOR rose to 2.072% from 2.0670% the week prior. Oil rose, the US dollar weakened slightly and Gold rose while Treasury market volatility, as measured by the Chicago Board Options Exchange Treasury Volatility Index (TYVIX), drifted lower to 3.51, down from 3.97 last week.

Fed hinted at a rate hike next month. In recently released minutes from its July 31–August 1 FOMC meeting, the Fed implied that it will hike rates 0.25% on Sept. 26 barring some unforeseen economic cataclysm. Fed officials voiced their concern about the trade war, stating that a prolonged dispute could disrupt economic growth. That said, the Fed doesn’t consider the risks material enough to steer it away from its current path of rate hikes. In addition, officials discussed the possibility of dropping the word “accommodative” in their description of policy from their post-meeting statement, stating that it may no longer be appropriate as they continue to raise rates. Markets anticipate that the Fed will continue with its plan to hike twice more this year and twice more next year as an economic slowdown will likely take hold in late 2019 or early 2020. Beyond that, it’s anyone’s guess.

Trump again publicly criticizes the Fed. Earlier last week, President Trump expressed his unhappiness with the Fed’s move toward raising rates and said that he will continue to criticize the central bank if it continues to hike. In response, the US dollar and US government bond yields fell. Amid all the political drama of the past week, the clear message from Fed officials is that they remain committed to their plans to continue raising interest rates. That’s unlikely to change until late next year.

No sign of progress as US-China trade talks conclude. The US and China ended their two-day, midlevel trade talks with no progress in sight, reducing the prospects of a deal any time soon. China was unwilling to further address either the Trump administration’s concerns about the bilateral trade deficit, which the US finds too steep, or Beijing’s efforts to get US companies to transfer technology to Chinese joint-venture partners. A senior US official said that China must address issues raised by the US to get a positive result from future engagements. No discussions took place regarding follow-up talks or any accomplishments. Amid the talks, the US imposed new tariffs on an additional $16 billion in Chinese goods, raising the total to $50 billion; China immediately responded with similar tariffs on US goods. While the tit-for-tat trade spat is entertaining, we doubt it will have any real impact on US economic performance and that China will eventually acquiesce to many US demands, as its economy is far less diversified and resilient to the effects of increasing US tariffs.

New home sales declined in July. For the second consecutive month, new home sales fell 1.7%, to 627,000 units, failing to meet economists’ expectations of a robust gain and the slowest pace since last October. The slowdown in new-home sales is one of the indications that rising input costs, supply constraints, and overall financial conditions are cooling down the housing market. In addition, the affordability challenges resulting from rising home prices and mortgage rates are causing the first sustained housing slowdown in five years.

Global market forces converge on rates. Concerns over weakening global growth have weighed on yields, with the 10-year Treasury further retreating to well below the 3% level. Key commodities such as copper and aluminum have fallen, while emerging market risks have driven mining stocks to their lowest valuation levels of the past several years. However, there continues to be a solid macroeconomic backdrop for the US economy. The billion-dollar question: what are these markets telling us about future growth relative to current expectations, and what does it mean for the probability of future rate hikes?

What to Watch This Week: The economic data spigot is mostly in the “off” position in the days ahead, with just a few important releases on tap, and no scheduled speeches from Fed officials following last week’s Jackson Hole policy symposium.

Data on Personal income and spending for July will be the key release to watch, given that it’s an important input into the calculation of Q3 GDP. July’s strong retail sales data gave markets somewhat of a preview and we expect the personal income and spending figures to show that consumers sustained their spending momentum at the beginning of Q3. Regardless of how the data perform, the ongoing political theater will likely dominate the markets attention this week.

Take-Away: While a 0.25% Fed hike on Sept. 26 is a near certainty, we’re focusing our gaze on what the next couple of years look like for Fed policy. The big question is whether Q2 US growth near 4% will carry over into Q3 and if so, render a December Fed hike a sure thing.  We doubt it on both fronts and believe we’ll see just one more hike in 2018. The Fed will push its December hiking plans to early 2019, as the torrid pace of growth in Q2 can be chalked up to transitory factors and won’t carry over to Q3.  US economic growth will likely slow in the second half of 2018 to a more sustainable 2.5-3% pace. As it does so, there’ll be less pressure on the Fed to hike at the end of 2018, as a stronger dollar, smaller Fed balance-sheet and a flat yield curve give Powell & Co. the confidence to follow next month’s hike with just two more in 2019. 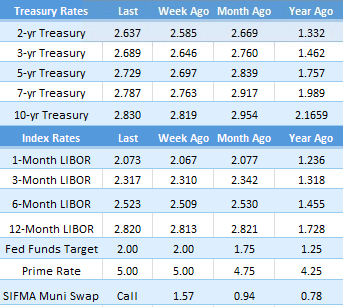 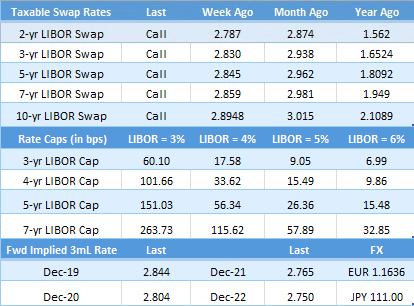 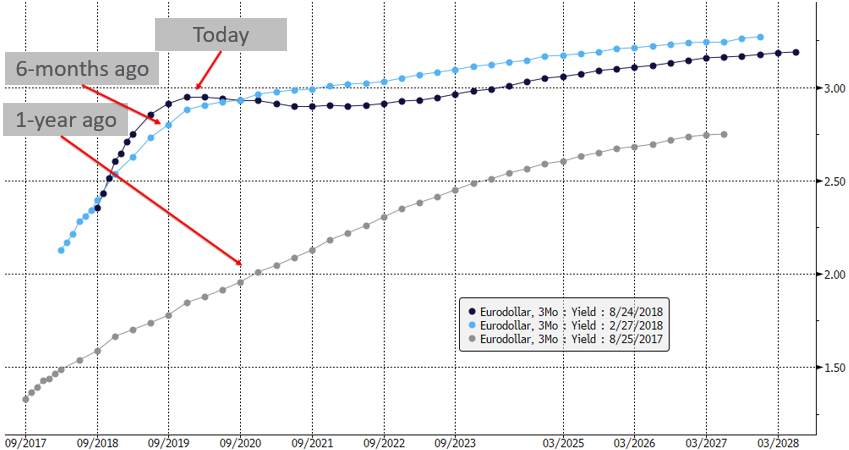