Positive Data Is Not What It Seems

Last Week: Interest rates and equities both fell, as confirmed cases of COVID-19 surged across the globe, calling the viability of recent re-opening efforts, and calls for an economic rebound, into question. The yield on the benchmark US 10-year Treasury note declined 10 basis points to 0.63% from the week prior. 1-month LIBOR followed suit, sliding to 0.1782% from 0.1847% this time last week. The price of a barrel of West Texas Intermediate crude oil fell $2 to $38 while the US Dollar and Gold both strengthened. Volatility in Treasury yields fell consistently throughout the week.

Defeasing is proving to be a useful tool for some borrowers in this low rate, high risk environment. For insight into why, see our recent DL Report, Defeasance is Shark Repellent.

Interest rate swaps: a public service announcement. We have been receiving an overwhelming number of calls lately – probably more than ever – from borrowers considering interest rate swaps to mitigate against floating interest rates rising over the long-term. In many of these conversations, the borrower is at the mercy of their bank that is offering the “best” hedge to lock in historically low rates. While certain aspects of a swap may be beneficial or convenient on the surface, they may add risk, additional costs (swap fees), or limit future flexibility. Many borrowers are also dealing with amendments and forbearance complexity as their loans experience the COVID-19 shock. We cannot stress enough how important it is to seek independent advice to help clarify what’s being offered, and more importantly, to give the borrower a comprehensive understanding of all the costs and risks involved. The bottom line: The bank is trying to sell you something. It is your job to understand it. Do you?

Consumers offering a glimmer of hope? As lockdown restrictions associated with the coronavirus pandemic eased last month, Americans opened their wallets wider than ever before as their spending rose a record 8.2% month over month. On the flip side, personal income fell 4.2% as massive government relief measures – like the $600 per month Federal employment benefit, began to wane. The personal savings rate remains extremely elevated at 23% after reaching 32% in April.  Our take: Given that consumers drive about 70% of all US economic activity, it would be logical to extrapolate the positive spending trajectory into a quick recovery. Unfortunately, given the recent re-acceleration of the virus, that would be premature. Other data back us up – consumer activity appears to have waned slightly as virus infections have increased, according to near real-time mobility indices, ride sharing and online restaurant reservation data.

All told, the consumer data tells us that a lengthy period of uncertainty and an incomplete jobs recovery will keep not only consumer spending – but economic growth – below pre-pandemic levels for a long while yet, and provide a catalyst for calls for more aid from Congress. A premature removal of policy stimulus – like the $600 per week unemployment benefit being offered by the Federal government – will delay the economic recovery if the public health environment does not allow a return to work on the timeline initially envisioned by our political leadership.

Other data looked good on the surface but had a dark side. Durable goods orders for things like airplanes, refrigerators, trucks, and the like rose 15.8 in May after dropping 18.1% in April, signaling that investments in equipment and by businesses won’t be as weak as initially feared in Q2. While encouraging now, once the full scale of the economic freefall becomes more evident, the subdued corporate profits and elevated uncertainty that will follow should businesses to hold off on major investments, choosing to await clearer signs of virus containment and consumer recovery before investing anew. We suspect that the virus-driven plunge in corporate earnings will weigh heavily on economic activity in the second half of the year even as lockdowns ebb. Consumers may resume spending again in the fall, but businesses will likely take longer to recover. Beware: positive data is not what it seems.

Inflation is nowhere to be seen. Inflation increased a paltry 0.1% in May, above consensus expectations, which called for a flat reading after declining (-0.4%) in the prior month. While prices for a wide swath of goods bounced back from the initial virus-induced demand shock, a reading of 0.1% undershot the Fed’s 2% target.  While supply constraints are boosting prices, the bigger driver is weak demand. Our take: Forget about inflation, the bigger risk now is deflation. More on that in future DL Monitors.

What to Watch This Week: It is jobs report week again; this one will be released a day early – on Thursday – due to markets’ being closed for the 4th of July holiday observance on Friday.

As we have said many times before, the monthly jobs report is historically the most impactful piece of economic data on interest rates, and this month’s report will not be any different. The signal the report sends however will be more muddied this time around; it covers the full month of June, when new Covid-19 cases were mostly on the decline, business sentiment was rising and regional economies were opening all over the country. It will barely reflect the new acceleration of virus cases, the re-shuttering of some businesses and re-closing of some recently opened regions that’s occurred over the last week and a half. Given the shift in economic fortunes the new infections bring, we will be wondering whether the growth in jobs shown in the report will be sustainable going into the fall. The positive jobs data are likely not what they seem.

Regardless, we expect the report to show that 3 million new jobs were created, following a gain of 2.5 million in May, and that the unemployment rate held steady in the month at 12.5% (down from its April peak but much higher than the pre-COVID peak of 3.5% in February). Even at those impressive levels of job renewal, employment will remain significantly below the pre-crisis peak; the economy lost 22 million jobs over the March-April period. As such, take the positive data with a grain of salt; it will likely overwhelm any hidden second-wave layoffs that will not be fully seen in jobs data until the July jobs report.

While the jobs report takes the data spotlight this week, there will be other important releases beforehand. Initial unlocking of the economy will drive Wednesday’s ISM index – a monthly measure of manufacturing activity – strongly upward in June, likely back into expansionary territory. While impressive on the surface, the gauge will prove to be a poor guide for the level of manufacturing activity relative to the pre-virus trend. Elsewhere, the minutes from the last Fed meeting will shed some light on the ongoing discussion with respect to enhancing policy guidance, and Tuesday’s data on consumer confidence will likely show that consumers may begin to re-evaluate the assumption of a quick return to normal, bringing implications for confidence and spending patterns.

Big Picture: The 10-year Treasury yield – now holding steady near 0.64% – is barely changed from the end of March, as markets have pounced on any sell-off as a buying opportunity, and the Fed helped keep yields low in general by buying $80 billion a month of Treasuries, a step it took to soothe markets after March’s turmoil. It looks like yields will stay at these levels for a while yet, as surging infections and moves in some states to pause re-opening efforts force markets to conclude that a revival of the American economy will be slow and fragmented. The Fed will make sure rates stay low as a result, the markets know it, and are perfectly happy keeping rates where they are for now. Could rates move even lower than they are now? Given the economic dynamics in play now, It’s entirely possible. 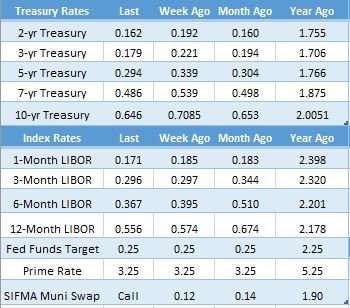 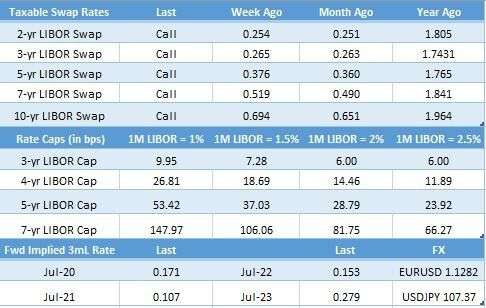 Rates at a Crossroads
Scroll to top