What You Missed: Long-term interest rates raced higher while equities fell hard on the week as markets assessed signals of lasting inflation and the Fed’s evolving plans to tackle it. The yield on the US 10-year Treasury note rose to 3.12%, its highest level since 2018, from 2.90% last week. Short-term rates, like the 2-year Treasury yield and Term SOFR, fell, reflecting comments from Fed Chair Powell indicating that future rate hikes may not be as large and frequent as markets believe.  Elsewhere, the price of a barrel of West Texas Intermediate crude oil rose $3.30 to $109.90, as the US Dollar and Gold both strengthened. Treasury yield volatility, a key driver of the cost of rate caps and other option-based interest rate hedges, fell throughout the week but remained near two-year highs.

The Fed Got Busy. America’s central bank put its money where its mouth is last week, raising interest rates by 50 bps – the first such hike since 2000 – and announcing plans to accelerate the shrinking of its massive balance sheet as soon as next month. Fed Chair Powell took the unusual step of suggesting that the Fed will hike rates an additional 50 basis points at both the June and July meetings, but dashed prospects for a 75-bps hike as some had forecasted. The Fed’s voting committee’s meeting statement highlighted strong consumer spending and business investment, which suggests the Fed won’t be swayed off its hiking path by the recent negative GDP print for Q1.

Regarding balance sheet reduction, the Fed detailed its plan to begin reducing its balance sheet on June 1st by an initial $47.5 billion per month ($30 billion Treasuries and $17.5 billion in mortgage-backed securities) for three months with a $95-billion-per-month cap ($60 billion Treasuries and $35 billion mortgage-backed securities) taking effect in September. Such moves would roughly translate into about 25 basis points of tightening over the next year.

All told, Chair Powell was unexpectedly optimistic regarding the prospects for an economic soft landing, and less insistent than some expected regarding the necessity of raising the Fed Funds rate above neutral, a level he put at between two and three percent (Fed Funds is one percent now). By week’s end, markets weren’t buying Fed Chair Powell’s’ smooth talking, as evidenced by a sustained fall in the equity markets and notable increases in longer-term Treasury yields.

Our take:  We’re now expecting the Fed to stay true to its word and hike rates by 50 basis points at its June 15th and July 27th meetings, but then pause to reassess, with the Fed Funds rate topping two percent by the end of the year. Such moves would help the Fed avoid crashing the economy as it fights inflation.

Solid jobs data fed both sides of the recession debate. Headline nonfarm payrolls rose 428K in April (vs 428K in March) above consensus estimates and the twelfth straight month of job gains. Negative revisions – an unusual occurrence during the pandemic – showed that hiring was weaker in the previous two months to the tune of 39K. The unemployment rate held steady at 3.6% and wages rose 0.3% in April after rising 0.5% in March.  Wage growth now appears to have peaked, though the pace is still much faster than what the Fed wants to see to keep inflation in check.

The household jobs survey, on the other hand, painted a very different picture than the headline data, showing a 353k decrease in employment, owing primarily to a reduction in the labor force (-363k) and a minor decline in the number of jobless (-11K).

Our Take: The household jobs survey paints a gloomy picture of the jobs market, while the headline survey says hiring is still going strong. Which is correct?

Due to data distortions caused by the pandemic, the two surveys, which are conducted independently, have varied significantly over the last six months. We expect a general narrative to emerge as the volatility in the data smooths out over the coming few months: more workers returning to work and wage growth slowing.

We suspect that America’s job creation engine will sputter in the coming months to approximately 200-250K in new jobs per month on the back of slowing demand for workers in some of the economy’s most interest-rate sensitive sectors: housing and construction. Consumer’s continued shift from goods to services will add to the job creation slowdown, as demand for jobs in transportation and warehousing also declines. It’s a dynamic that will give the Fed breathing room to tighten less than markets currently expect.

Lockdowns hit China’s economy and ensure that inflation remains stubbornly high here at home. In April, China’s economy slowed dramatically as it battled the spread of COVID-19. Last month, output in both the manufacturing and service sectors fell due to lockdowns in certain regions and more far-reaching mobility restrictions in others. In-person service restrictions helped push the services sector purchasing managers index down to 41.9 from 48.4 in March, while the manufacturing index fell to 47.4 from 48.4.

Despite rising social unrest, China’s President Xi Jinping reaffirmed the government’s commitment to its zero-COVID policy, warning against any easing in mitigation measures. The dynamic all but guarantees that supply chain snarls will be with us for longer, and that prices for a variety of goods will remain stubbornly high, emboldening the Fed to stay well on its hiking path into the summer at the very least.

What to Watch This Week: Inflation data going into last week’s Fed meeting had been mixed:  core inflation had recently logged a decline, but consumer’s wages were still showing signs of growing rapidly. While it was just one month of improvement in core inflation, it was likely enough to knock any Fed member’s calls for 75-bps hike off the table. However, it wasn’t enough to dissuade Chair Powell from publicly announcing the Fed’s intention to hike by 50-bps at the next two Fed meetings.

A sustained slowing of core inflation would speed the Fed’s return to 25-bps hikes, which brings this week’s release of Consumer Price Index (CPI) data (Wednesday) into the spotlight. We expect the CPI data to imply a more broad-based slowdown in core-goods sectors, since demand for consumer durable goods, boosted by the epidemic, is now easing as consumers rotate their spending on services. To be sure, we may not see a large decline in CPI this week, but the direction is important.

All told, even if our hunch proves correct, other price gauges will show that inflation remains high, confirming the need for more Fed tightening. Both the producer price index (Thurs.) and the import price index (Fri.) are expected to show rapid increases, indicating that international supply-chain snarls persist. To top it off, Europe is edging closer to an embargo on Russian oil, which will keep energy prices high, despite China’s lockdown-induced economic slowdown. While peak inflation may have passed, the decline from its 40-year high will be painfully gradual, keeping the Fed on track to raise rates markedly over the next several months.

Where are rates headed this week? All of the high inflation readings to be released this week will likely keep upward pressure on short-term rates, while deteriorating risk appetite in financial markets could erode upward momentum in long-term rates, like the 10-year Treasury yield. Investors are looking for places to hide amid the recent steep declines in equity markets. 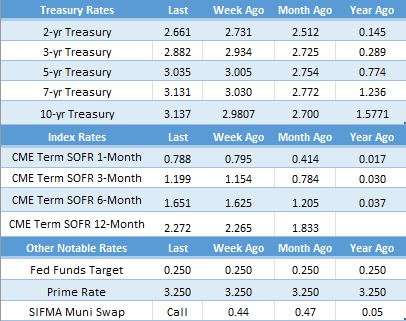 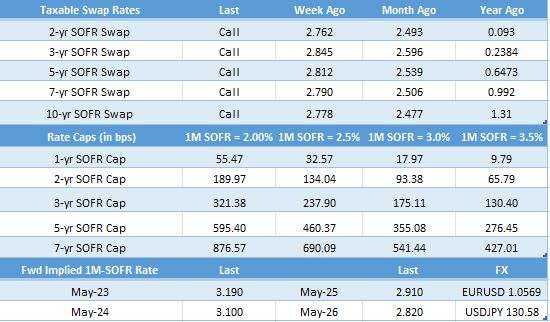 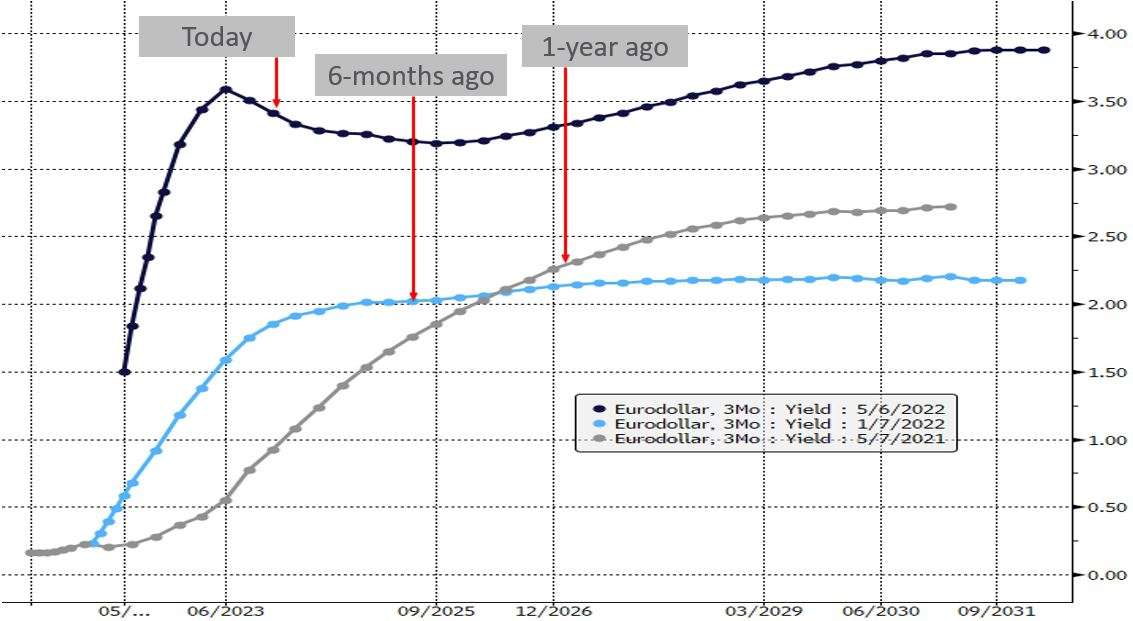 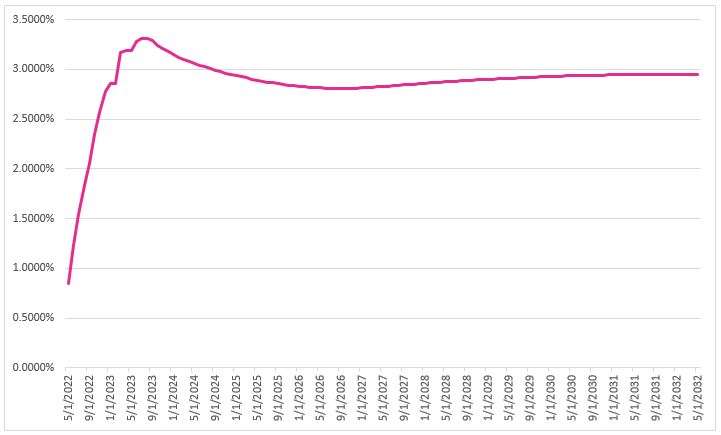 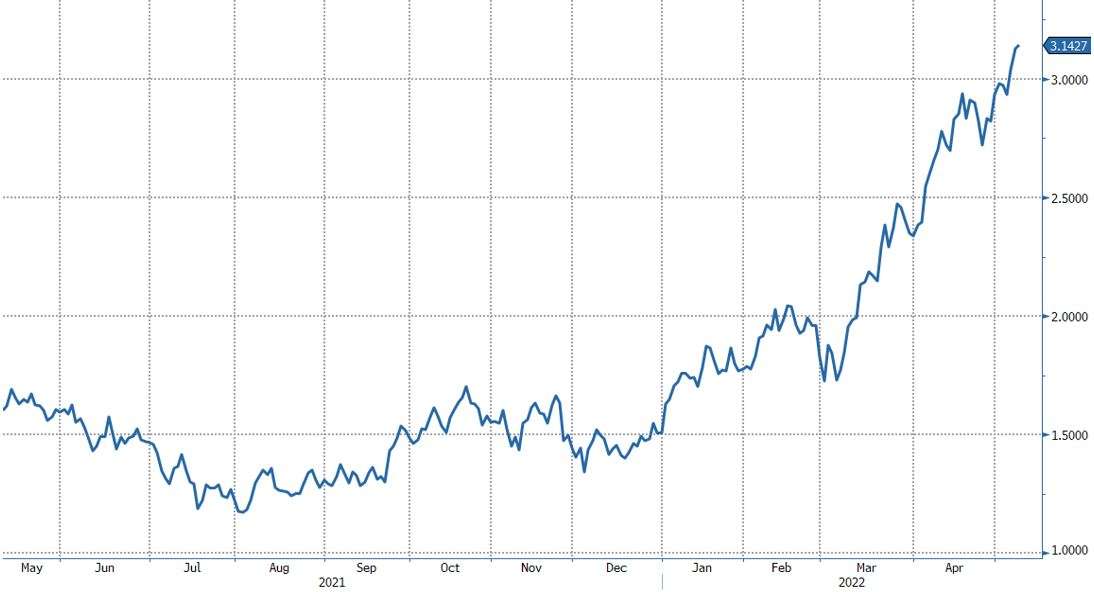