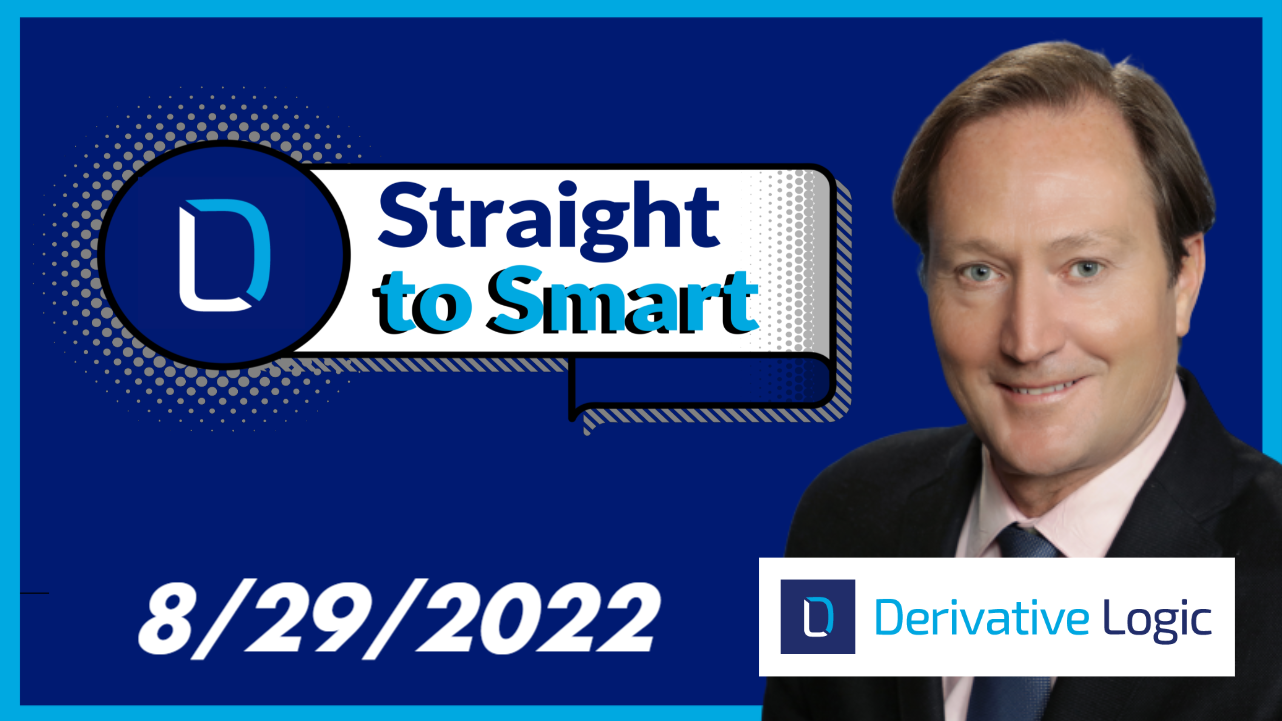 What You Missed: Interest rates across the curve lurched higher yet again last week, driven by the widely viewed speech in Jackson Hole by Fed Chair Jerome Powell, where he stated that the Fed is prepared to keep hiking rates and leave them high for longer, even as the consequences will likely include “some softening” of the jobs market and “a sustained period” of subpar economic growth.

For the week, the 2-year US Treasury yield rose 9 basis points to 3.40%, in a sustained climb throughout the week, approaching its 3.43% high seen in June. More muted yield increases were seen in every other US Treasury maturity except for the 20 and 30-year, which fell on the week, manifesting further flattening of the Treasury yield curve. Elsewhere, the price of a barrel of West Texas Intermediate crude oil increased to $92.25 from $88, as the US Dollar strengthened slightly, and Gold traded flat.

By the end of last week, the implied yield on the March ’23 Fed funds futures contract – the rate market’s best guess how much more the Fed will hike from here – stood at 3.81%, up from 3.64% before Powell’s Jackson Hole speech. The futures market anticipates the Fed funds rate peaking around March/April ’23, then slowly drifting lower by ~ 30 bps into year-end ’23.

Powell’s tough talk wasn’t tough enough. Fed Chair Powell spoke for little more than nine minutes last Friday morning and kept his message simple: Smothering inflation will likely require the central bank to hike more and keep rates high for longer than most expect. The message was intended to encourage recent market expectations of more sharp rate hikes in the near-term, but to also to counter expectations for rates to fall back from their peak quickly as the economy slows next year. Powell pushed back hard on the notion of rate cuts last Friday but didn’t offer any numerical markers for when the Fed might stop hiking interest rates – beyond saying the central bank won’t “prematurely” loosen policy – or lend any thoughts on where the Fed views the “neutral” rate, the level of the Fed Funds rate that neither propels nor restricts economic activity, the natural rate of unemployment, or potential economic growth.

Our take: While sounding tough on the surface, Powell’s speech offered little specifics and therefore won’t discourage market bets that the Fed will precipitously cut rates next year – as seen in the shape of the LIBOR and SOFR forward curves – especially if August’s read on inflation, due for release on September 15th, is as soft as anticipated. On net, rate-hike expectations edged marginally higher for 2023 after the speech. Markets are back to pricing in roughly the same peak Fed Funds rate as implied by the latest dot plot for year-end 2023 – 3.84%, getting there in March 2023 – but continue to envision a 25-bp cut or two by the end of next year. We suspect that this conflict between the Fed and markets will resolve early to mid-next year with both parties meeting somewhere in the middle.

Mixed data keeps markets guessing. The August US purchasing managers’ indices’ flash readings revealed a bleak economic picture as the composite index continued to decline, falling to 45 from 47.7 in July. Adding to the somber mood, new home sales fell once again in July, falling 12.6% from June on the back of rising mortgage rates and housing costs. In the US, the average cost of a brand-new home increased by 8.2% from the previous year to $432,000. On the positive side, the steady drop in unemployment claims was encouraging. Since peaking seven weeks ago, the data, historically a leading predictor of recession, has declined over sequential weeks.

Elsewhere, an increase in core durable goods orders was another positive development. In July, orders increased 0.4% after excluding defense and aircraft. An annual benchmark revision to data from the US Department of Labor Department revealed an additional 462,000 jobs were added to payrolls for the year through March, about 39,000 more each month than previously recorded. For other data releases last week, the initial reading of Q2 US GDP was revised to and improved -0.6% from -0.9%. In Q2, consumer spending increased by an annualized 1.5%, exceeding the initial projection of 1%. Finally, the average US nonfinancial company profit margin increased from 14% in Q1 to 15.5% over the course of the quarter. The fact that it’s the highest level since 1950 indicates that businesses have thus far been successful in passing on higher input costs to customers.

Bottom line? We’re watching the relationship between personal spending by consumers and inflation, and how the interplay between the two impacts Q3 economic growth, and therefore the prospect of further Fed rate hikes amid a slowing economy. Thus far, personal spending has declined slightly amid falling inflation; not a good omen for economic growth after two consecutive quarterly declines. The real test will come this fall, as consumer’s pent-up demand for services like travel and entertainment wanes and inflationary pressures persist. Will the Fed view a solid jobs market and wages as a reason to stay resolute on further rate hikes? We’ll see.

What to Watch This Week: Despite the yield curve continuing to invert following Chair Powell’s Jackson Hole speech, traders are still betting that the Fed will lower interest rates in 2023. Even Powell’s aggressive remarks have proven insufficient to persuade a bond market eager to believe a dovish Fed pivot is approaching.

Powell’s assertion that the economy’s underlying momentum is still robust was an intriguing revelation from the speech. Numerous activity indicators seem to support that assertion. Due to falling gas prices, consumer confidence has improved (Tues.) from subpar lows. ISM manufacturing (Thursday) is likely in expansionary territory as production is boosted by a backlog in motor vehicle demand (unit motor vehicle sales, Thurs). Despite a lack of property sales, home prices are still rising steadily (Case-Shiller, Tues.).

For now, the next point of focus for interest rates is on the Fed’s September rate decision – weather they’ll raise interest rates by 50 or 75 basis points. While we suspect that the next read on inflation will show that it’s easing slightly, the Fed will give the state of the jobs market equal consideration. Even if the August jobs report (ADP, Wednesday; nonfarm payrolls, Friday) and job openings (JOLTS, Tuesday) both show that the jobs market has cooled, it’s likely still hot, implying that its very possible that the unemployment rate, a key focus of Fed when deciding monetary policy, will continue to creep lower. Given these factors, we suspect that a 75-basis point hike on September 21st is a real possibility.

All told, even if the peak of Fed Funds rate falls short of 4% – again, markets now project that it will peak at 3.84% in March – the Fed keeping rates slightly below 4% for many months would mean the yield on the two-year Treasury note could climb toward 3.60% or even higher. Such a move would keep pressure on short-term hedging costs through early to mid-next year. 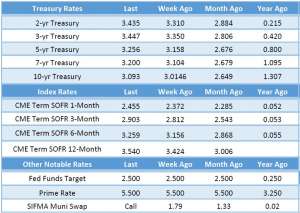 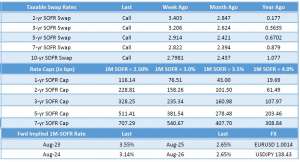 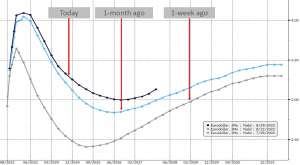 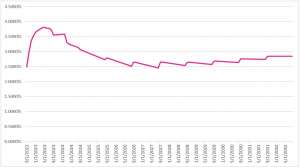 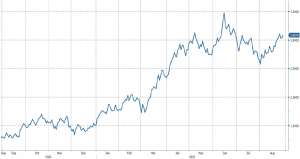