Last Week: Interest Rates held mostly steady, while global equities advanced modestly this week. US oil prices, Gold and the US Dollar traded higher. The yield on the US 10-year Treasury note was steady near 1.75%, while 1-month LIBOR traded higher to .5340% from .5279% a week ago.

The few pieces of economic data released last week were decidedly mixed, making it unlikely that the Fed will be dissuaded from nudging interest rates higher at its December meeting.

While it is early in the Q3 corporate earnings season, the first round of reports suggest that the earnings recession of the past four quarters may be finally coming to an end, with the S&P 500 Index earnings expected to eke out a 0.5% advance this quarter. Revenues are also expected to rebound, but by a modest 2.5%.

In international news last week, the Chinese economy continued to grow at an annual rate of 6.7% in the third quarter, unchanged from the prior two quarters. It seems that the Chinese economy and markets have stabilized after turbulence in late 2015 and early this year, but most believe that most of the economic growth the government is touting is driven by an unsustainable, government-driven surge in corporate credit.

This Week: The week ahead is front-loaded with comments from Fed officials and back-loaded with important economic data, both of which will continue to support a December Fed rate hike, now being given a 70% probability by markets.

On the speaker front, most of the Fed officials on tap have subscribed to a December hike, to varying degrees. We’re not expecting any surprise comments to the contrary.

On the data front, the spotlight will be Friday’s release of US Q3 GDP, which should show a healthy 3.0% increase, a 2-year high. Such a number would show that US economic growth is finally gaining momentum after a five-quarter deceleration from 3.3% in Q1 2015 to a paltry 1.3% in Q2 2016. A 3.0% number on Friday would also set the stage for economic growth this year coming very close to, or exceeding, the Fed’s official forecast – an essential element for additional interest rate hikes next year. Consumers are expected to be the driving contributor to most of the gains, as corporates have pulled back from any meaningful CapEx or inventory replenishment so far this year.

Other important releases on Housing, Consumer Confidence, Durable Goods purchases and employment should paint a healthy economic picture, if not sharply so.

Take-Away: This week’s data provides the first official gauges on how the US economy has performed in Q3, and the consensus is that we’re doing the best we’ve done all year. Should such a belief manifest into reality, the market’s focus will quickly shift to next month, where the calendar is full of important economic data, the presidential election and the first jobs report of Q4.

We continue to believe the stage is set for a December interest rate hike, and that it will take several data or event driven negative surprises to deter Fed policy makers from hiking. In the near term, the uncertainty of the outcome of the Presidential election is causing the Fed to assess how the resulting new fiscal policies will affect the economic outlook and how it should respond. 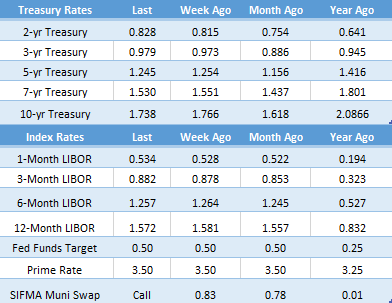 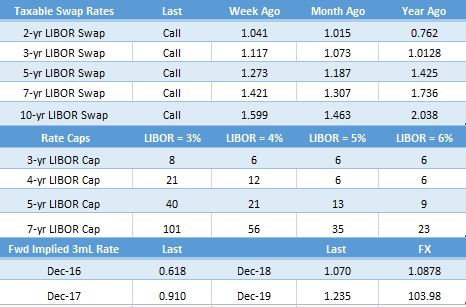 LIBOR Futures (where the market expects LIBOR to go in the future): 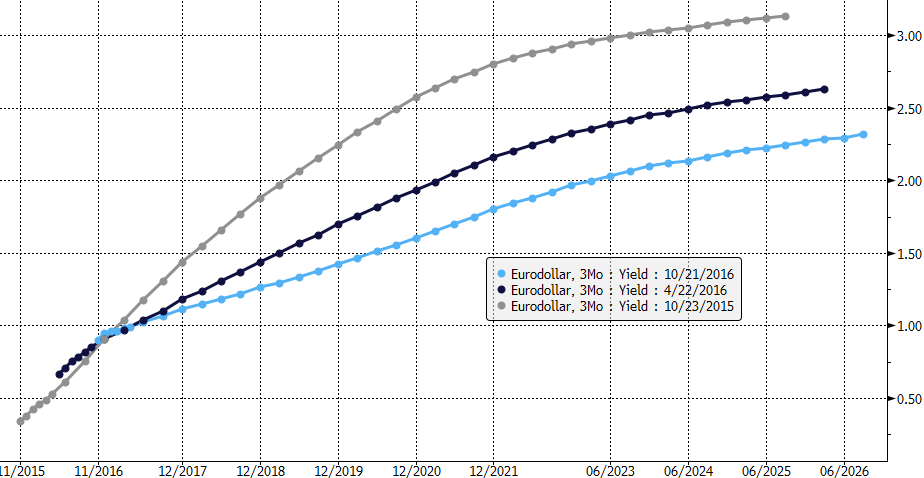