Last Week: Interest rates were mixed, and equities rose after news of a ceasefire in the ongoing US-China trade war and data showing America’s job creation engine produced a blowout month in June. The yield on the US 10-year Treasury note rose to 2.03%, rebounding from a three-year low below 1.96%, as 1-month LIBOR fell to 2.36%, 2 basis points lower than this time last week. Oil fell $2.50 to $59.60, while the US Dollar and Gold both rose modestly. Treasury yield volatility fell to 4.15 from 4.39.

Sharp rebound in new US jobs blunts market calls for a near term rate cut. Historically the most significant piece of economic data for interest rates, last Friday’s release of US jobs data for June showed 224K in new jobs for the month, topping all forecasts. Broad-based job gains were seen in manufacturing, construction and services industries. The unemployment rate ticked up to 3.7%, just off a 49-year low. Wages came in slightly below estimates but showed that workers continue to wring solid wage increases from employers, and that inflation remains subdued. The labor participation rate also ticked higher, showing that more people are finding jobs even as many aging baby boomers are retiring. All told, the data dispels concerns that US economic momentum is buckling in the face of heightened trade tensions and slowing global growth and challenges the case for a Fed rate cut later this month.

Other data painted a less rosy picture. Lurking in the shadows of the jobs report were two less encouraging gauges of America’s manufacturing and services industries. The ISM Manufacturing and non-Manufacturing indices, both widely watched indicators of recent U.S. economic activity, both declined by more than anticipated, to a three-year low, and to levels normally accompanied by much slower economic growth than we’re experiencing now.  The data were consistent with a continued slowing in economic growth, but don’t yet look weak enough to convince the Fed to cut interest rates this month.

Stocks set records but bonds aren’t convinced. The S&P 500 Index advanced to record highs as the markets welcomed a fragile trade truce between the US and China. Markets are still fully pricing in a quarter-point cut at the Fed’s July 31st meeting and are also pricing in a good chance of an additional quarter-point cut later in the year. Equity investors anticipate that a fresh wave of global economic stimulus will help the US economy avoid a recession in the next year or two. Bond markets seem less convinced however, based on the muted rebound in Treasury yields following the release of the stellar jobs data, mixed economic data and an absence of detail about real progress on the US-China trade negotiation front.

President Trump continues effort to shape the Fed. The President announced that he intends to nominate two new members to the Fed’s Board of Governors. The nominees are Judy Shelton, an economist who is currently US executive director at the European Bank for Reconstruction and Development and Christopher Waller, the director of research at the Federal Reserve Bank of St. Louis. Shelton has been a noted Fed critic and has advocated for lower interest rates. Waller is an advocate of central bank independence.

What to Watch this Week: The outsized 224K gain in non-farm payrolls in June equates to a three-month average gain now standing at a respectable 171K. That’s a slowdown from the three-month average pace of over 200K at the turn of the year but is still much stronger than it usually has been when the Fed cut rates in the past. For some historical perspective, going into the Fed’s mini-easing cycle of 1995, job creation was negative for two consecutive months and was running at only 24k on a 3-month moving average basis. When the Fed delivered insurance cuts in 1998, job creation averaged a solid 207k on a three-month average basis, but global factors and an extreme bout of risk aversion in financial markets spurred the Fed to cut.

Now that ultra-important jobs data has come and gone, markets are left none the wiser about the trajectory of Fed monetary policy for the rest of the year. The one conclusion that traders appear happy with is that a 50 basis point cut is now off the table for July, which has sent the dollar and the 10-year yield back into familiar ranges. Looking forward, it now seems as if the Fed faces a choice between cutting two or three times this year, with markets uncertain about which path they’ll choose. Yet when you consider how far the market’s consensus view has shifted in the first half of the year, it’s clear that assuming things will proceed along an orthodox road map may be fraught with peril.

One thing is certain: markets are in the midst of absorbing a significant blow to their rate-cut bets, and the strong jobs data offers Fed Chair Powell a window of opportunity to further dash rate cut expectations in scheduled testimony to Congress on Wednesday and Thursday. We expect Chair Powell to attempt to walk-back market calls for quick, aggressive rate cuts and instead lay the groundwork for a more measured response by delivering at least two “insurance” cuts later this year, beginning in September, when the Fed’s balance sheet unwind has concluded. The Fed’s primary motivator to cut? If economic growth is indeed slowing moderately, as data suggests, aggressive cuts now would leave the Fed with limited room to cut in the next downturn when it’s most needed.

Taking a back seat to Powell’s testimony this week is Wednesday’s release of the minutes from the last Fed meeting as well as data on producer and consumer prices in June which were likely boosted by the increase in tariffs on Chinese goods.

Take-Away:  The Fed is still due to cut rates later this year, given persistent low inflation and an inverted yield curve, but the case for an imminent rate cut has been watered down significantly.  Fed Chair Powell noted last month that there wasn’t much support for an immediate rate cut and, since that comment, the trade truce with China has reduced the near-term downside risks to the economy, signs of economic resiliency have persisted, and equity markets have rebounded. As a result, we expect the first rate cut in September. 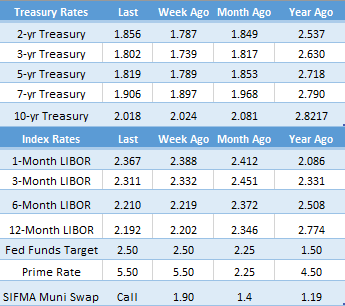 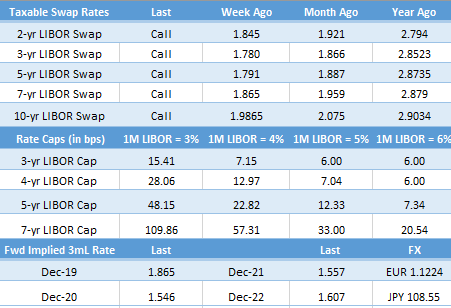