Last Week: Interest rates edged higher as global equities traded dramatically lower on the week, ending the bull market in the S&P 500 Index just one day after it turned 11 years old. On Thursday, the S&P 500 suffered its largest one-day percentage drop since 1987 and Europe suffered its largest single-day drop on record. The yield on the US 10-year Treasury note fell as low as 0.32% on Monday, wrapped the week at 0.96%, only to fall to a low of 0.76% in early trade today, after the second emergency cut by the Fed, which dropped the funds rate by 1.00% to the zero bound yesterday. Elsewhere, 1-month LIBOR rose slightly over the week, finishing near 0.80%, but expect LIBOR to reset lower over the next few weeks once the overnight repo rates stabilize. The price of a barrel of oil fell $12.51 to $30.23 amid a price war initiated by Saudi Arabia. That, and the continued fallout from the COVID-19 pandemic, contributed to a historic spike in Treasury yield volatility, which approached 2008 highs near 14.00.

Are you scheduled to buy a rate cap or swaption this week? Better make sure that the bank is able to trade and that the pricing is as you expect. With all the gyrations in markets over last week and the weekend, we’ve seen several banks either dramatically raise prices or choose not to trade at all, at any price. To quote one of our favorite traders, “Any price I quote is practically worthless as soon as I quote it. There is virtually no liquidity for any tenor, any strike at the moment. Impossible to cover hedges and prices are all very wide.” Need to buy that rate cap to close? Tread with caution. Its time to question your assumptions. We suggest requesting a grace period from your lender – of at least a few days – for executing the required interest rate cap.

The Fed cut rates by 1.00%, now near ZERO. In an expected move (by us),  Fed Chair Powell & Co. delivered a second intermeeting rate cut at 5pm Sunday, lowering the target range for the federal funds rate by 100 basis points to 0.00% – 0.25% in response to the disruption to economic activity from the coronavirus. The Fed also provided soft forward guidance, noting that it expects to keep rates ultra-low until it’s confident that the economy has weathered recent events and is on track to recover.

After yesterday’s move, the Fed has now cut rates by 1.50% in the last two weeks, added a promise of at least an extra $700 billion in asset purchases, tweaked its requirements for banks to make sure the credit spigot to consumers and businesses keeps flowing, and injected a trillion dollars into markets to prevent them from seizing up, with the longer term objective of preparing the economy for the fastest-possible post-outbreak recovery. The broad spectrum of tools engaged shows the Fed is contending with more than just an economic shock. The Fed is attempting to prevent a downward spiral as a public health emergency, economic slump, and financial crash compound. With actions like this, you can be sure that the Fed is hearing troubling feedback from its vast network of diverse business contacts across the spectrum of industries.

Credit markets pricing in downgrades. It has long been a market fear that the quality of US investment-grade bond indices has been eroding, with fully 50% of the index made up of BBB-rate paper, the lowest investment grade. That fear is starting to be realized. Investors this week began pricing many BBB-rated bonds as though they had already been downgraded. The next shoe to drop? Downgrades by the rating agencies, which haven’t been seen – yet.

What to Watch This Week:  With the economy now certain to be on the brink of recession, the availability of credit is now front and center, and we’re on high alert for any signs that it’s drying up. While we’ve seen spreads widen on the most debt laden of industries, and the bonds that represent them, we’ve yet to see a similar dynamic across industries. However, that could change, and quickly.  After all, if you can’t get a new loan or refinance, who cares how low interest rates are?

As financial markets fall further, wealth destruction and the drastic containment measures we’re all experiencing risk igniting a negative feedback loop that unhinges economic sentiment, spurs layoffs and crashes consumer spending. Over the coming days we’ll be scanning the newswires for early signals of the looming wave of layoffs and curtailed work hours that will spark the beginning of the downturn.

For the event and data calendar this week, the Fed’s planned policy meeting on Weds March 18th has been cancelled considering yesterday’s policy action. On the data front, the key data releases this week are the Empire manufacturing index on Monday (which was down 34.4 points, the largest fall on record), the retail sales report on Tuesday, and the Philly Fed manufacturing index on Thursday. Any clues regarding the pace of activity and the health of the labor market will be scoured for the first signs of disruption. These will likely show up in the initial jobless claims data on Thursday, and airline, hotel, hospitality and tourism jobs.

Big Picture:  As the pandemic-driven economic damage unfolds, expect the Fed to impose iterations of quantitative easing (“QE”), forward guidance, and keeping rates near zero through the end of 2020, especially in light of the Fed’s repeated dismissal of the possibility of negative interest rates in the US.

While the Fed is doing its best, the tools at its disposal are inadequate to give confidence to Main Street. Why? The Fed’s tools only work when consumers are willing to spend money borrowed from financial institutions. It now is up to fiscal policy makers to deliver help to particular segments of industry and the general population. It will likely come in the form or payroll tax holiday and/or a mass mailing of benefit checks, which would impact a broader swath of the population, such as retirees and the under and/or unemployed. The priority now should be the speed, size and reliability of fiscal policy, with a particular emphasis on speed. 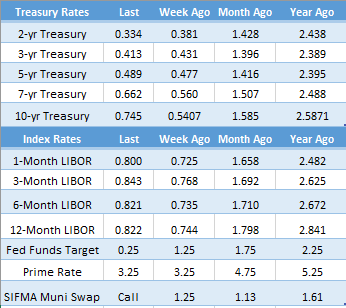 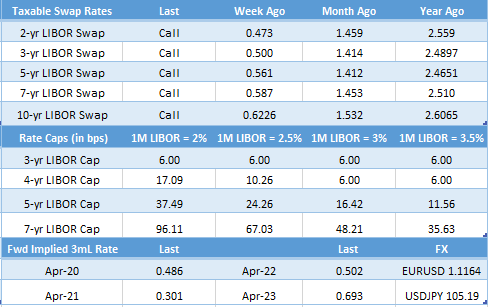 Click here for more DL Reports
Take Me To Zero