What You Missed: Short-and long-term rates rose, while equities were little changed on the week in choppy trading, as markets whipsawed between scorching inflation readings and the threat of war in Ukraine.  The short end of the Treasury yield curve was hit even harder than the long end, with the yield on the 2-year note spiking 24 basis point to 1.58% on Thursday. That’s a 7 standard deviation move, the largest single-day rise in about twelve years. The yield on the US 10-year note rose to 2.03% from 1.93% a week ago. Elsewhere, the price of a barrel of West Texas Intermediate crude oil added about $1 on the week, putting it at $90.95, while the US Dollar and Gold both rose. Treasury yield volatility, a key driver of option-based interest rate hedges like rate caps and swaptions, leapt to levels not seen since March 2020.

Rate hike anticipation builds; US inflation continues surge. US consumer prices, as shown in the Consumer Price Index (CPI), rose 7.5% in January compared with a year ago, the biggest jump in 40 years. The increase was broad-based, with energy, food prices and rents leading the surge, but also some alarming increases in categories not seen before, such as medical-care services, which has a much larger weight in the PCE deflator – the Fed’s preferred price gauge. All told, the readings showed that inflation has moved well beyond the ongoing disruptions in global supply chains. Excluding food and energy, prices rose a still-robust 6% while rent readings reached a 30-year high. With no signs of an inflation slowdown on the horizon, financial markets immediately began to price in additional Fed hikes. Futures traders are now pricing a 50-basis point hike at the March Fed meeting. There will be plenty of opportunity for the Fed to hike; it meets three times before July.

Our take: Last week’s inflation data, following the string of tight labor-market readings last week, may be the nudge the Fed needs to opt for a 50-basis point hike in March. Of special note, housing costs are rapidly increasing compared to previous years. This component to the inflation mix is expected to keep overall inflation indices high in the coming months. Given last week’s high inflation reading, the Fed is now more likely to prefer a more aggressive path of rate hikes; but will it hike as much as seven times in a row as some are predicting? No. Why? As the Fed begins its hiking spree, it will be very sensitive to how its rate hikes impact economic growth, preferring to nudge rates slowly higher, allowing markets and the economy to slowly adjust and avoiding a squashing of positive economic momentum.  In the meantime, Inflation will get worse before it improves, likely peaking at roughly 7.8% in next month’s report.

Looking further out, we suspect inflation will fall to somewhere near 6.5% in Q2, assuming energy prices ease off their highs, and supply bottlenecks don’t re-intensify. Still, risks tilt to the upside. Potential hazards currently on the radar include an escalation of the Russia – Ukraine geopolitical conflict, which could push oil prices beyond $100 per barrel; a continuation of the rising housing rents beyond their current three-decade high; supply-chain bottlenecks intensifying again; and price pressures spreading to a broader set of services categories as businesses pass along higher wage costs. Any combination of these risks could push average CPI inflation close to 5% for the year as a whole – substantially higher than most expect. The dynamic would prompt the Fed to be more aggressive in pulling back the easy-money party punchbowl.

Ignore consumer-driven recession warnings at your peril.  The gap between gauges of depressed consumer sentiment and the more optimistic consumer confidence measures have widened sharply recently. Consumer sentiment, an accounting of people’s feelings toward their current financial health, the health of the economy in the short-term, and the prospects for longer-term economic growth, deteriorated in early February to its lowest level in a decade, as rising inflation and falling real incomes, dampen hopes for a positive future despite a sharp drop in Omicron infections. Consumer confidence, on the other hand, measures how optimistic or pessimistic consumers are regarding their expected financial situation. Recent gauges of consumer confidence indicated a healthy resistance to the impact of Omicron; no surprise, given a hot jobs market and employers ready and willing to raise wages.

Our take: Ordinarily, the diverging confidence and sentiment measures signal a looming recession, as less confident consumers pull back on spending. But perhaps not this time around. The ebbing of the Omicron wave, and policy makers’ commitment to curbing inflation, will increasingly reassure consumers, who alone account for 70% of America’s economic activity. At the end of the day, consumers’ contribution to economic growth will likely ease over the next few quarters but will still be enough to avoid the risk of a broader economic stall, even with Fed hikes in the mix.

A stealth driver of inflation is intensifying. Of particular interest to a sub-set of our readers, the trend of rising rents is accelerating, becoming a key contributor to rising inflation. Price increases in both primary residences and owners’ equivalent rent, the amount of rent that would have to be paid to substitute a currently owned house as a rental property, continue their rise, and likely have more room to run. Popular projections have both measures moving into the vicinity of 6% year-over-year later this year, from 3.8% and 4.1%, respectively.  The accelerations have been concentrated in the South in the wake of the pandemic – a consequence of remote work and a more rapid recovery in employment.

Bond yields bore the brunt of inflation hysteria. The US is not alone in seeing sovereign bond yields rising sharply. As an example, most of the German yield curve is now suddenly positive, after wallowing in negative territory as recently as the Christmas holiday. Yields on the periphery of Europe have risen sharply since the European Central Bank signaled that its leaning toward a rate hike at its February meeting. The Bank of Japan recently announced that it would buy unlimited quantities of 10-year Japanese government bonds at 0.25% to enforce its yield curve control policy as yields rose to their highest levels since 2016. Elsewhere, emerging market central banks may be closer to the end of their rate hiking cycles, having moved early and aggressively in 2021. Russia, Brazil and Chile may be nearing a peak in rates. Overall, the scenario gives the Fed more confidence to hike, and soon.

What to Watch This Week: Last Thursday’s red-hot read on inflation has prompted financial markets to price in a higher likelihood of a 50-basis-point Fed rate hike at its March 16th meeting. The billion-dollar question now is, does the Fed feel the same degree of urgency as markets? The verdict is clearly out, as public comments by Fed members last week muddied the water, failing to show any real consensus by the Fed’s voting members. St. Louis Fed President James Bullard embraced the market’s 50-basis point hike expectations, while San Francisco’s Mary Daly and Richmond’s Thomas Barkin squashed any perceived need for such a sizable hike.

Looking back to the minutes of the Fed’s December meeting for clues, it showed that most Fed members still believed that inflation is transitory. This Wednesday’s release of minutes for the January meeting will likely show this view hasn’t changed; although most Fed officials may not be convinced of the need for a sizable hike just yet, data this week will help determine if they will by the March meeting. Data in the coming week will likely indicate the economy is certainly strong enough for rate hikes: labor-market conditions are tight (initial jobless claims, Thursday), prices remain elevated (Producer Price Index, Tuesday; import prices, Wednesday), economic activity is rebounding sharply from the Omicron wave (Empire manufacturing survey, Tuesday; industrial production, Wednesday), and demand is solid (retail sales, Wednesday; inventories, Wednesday; existing home sales, Friday).

Big Picture: Given the financial media’s shouting for a 50-basis point hike from the roof tops of late, it’s a good time to look back at history for perspective. The Fed hasn’t hikes rates by more than 25 basis points in a single instance since May 2000, when it hiked by 50-basis points in March 2000, just as the dot-com bust hit.

To bring you back to that time, after the near-miss recession of the mid-1990s, then-Fed Chair Alan Greenspan moved the Fed to a gradual approach of raising rates by 25 basis points at a time at most, and only during Fed meetings. It’s a hiking technique that most see as less likely to create market panic, an especially desirous outcome today given all that we’ve lived through the last couple of years. The Fed has also become a lot more vocal over the last twenty-years. Just look at the innumerable comments that Fed officials make to the financial media on a weekly basis these days in an attempt to guide markets. That never happened twenty years ago. Back then, the Fed was more like an ivory tower that rarely spoke between meetings, and when it did, everyone listened with intensity and without a Rosetta stone to decipher Greenspan’s comments.

To take the side of the 50-basis point hike pundits, if the Fed were to hike that much in March, while sending a strong inflation-fighting signal to markets, it would also increase optionality, something the Fed craves in this uncertain environment. A 50-basis point, “shock and awe” hike would also force financial markets to digest all of the Fed’s near-term hikes all at once instead of giving them months to contemplate fears of over-tightening. By front loading hikes, the Fed would increase the odds of an economic downturn.

We suspect the Fed will be slow and gradual in its hikes, as any tightening of policy that takes markets by surprise could crush asset prices and run the risk of pushing the economy back into recession. In essence, the recent rise in rates across the curve and equity market sell off shows that markets have already done part of the Fed’s job, allowing it more leeway to be patient and see how its hikes affect the economy as it walks the highwire of pulling back, yet leaving enough in the stimulus tank for an economic soft landing.

Uncertain about hedging future funding or wanting to stay flexible by floating but looking for solutions other than a swap.  Call us about swaptions or corridors.

Talk on the Street: Has anyone been experiencing situations when your car, eyeglasses, picture frame should be ready to be picked up and no one calls you?  What about scheduling a doctor’s appointment, car service, or appliance delivery and receiving 5-10 text messages to remind you.  Not sure if there are any conclusions to make, but the most likely reason is that labor is stretched and who cares if your stuff is ready because it was probably paid for in advance. 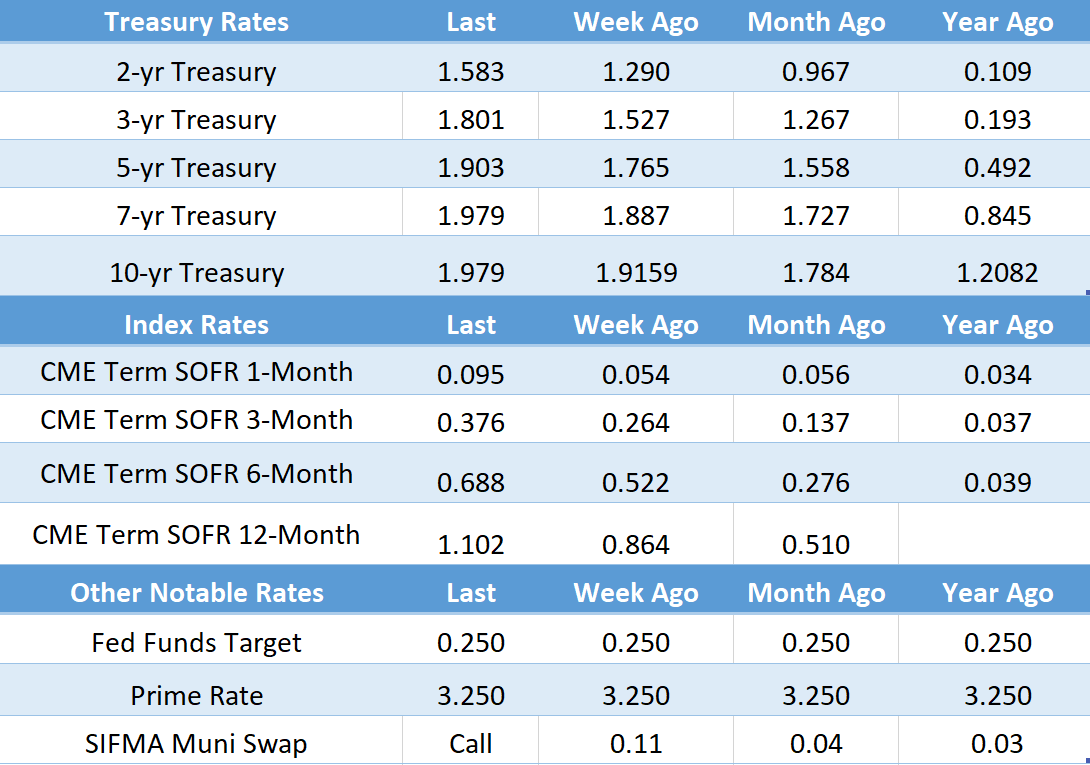 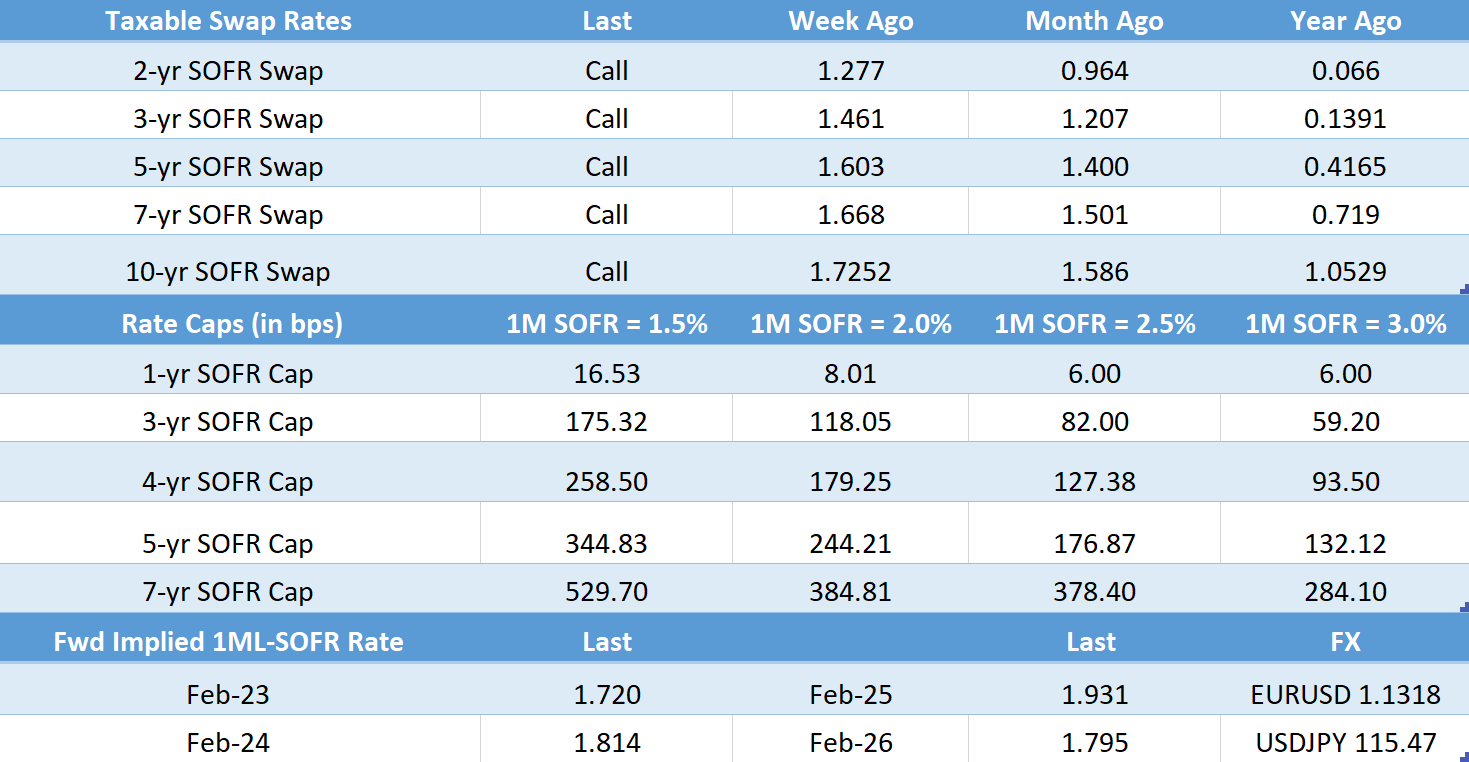 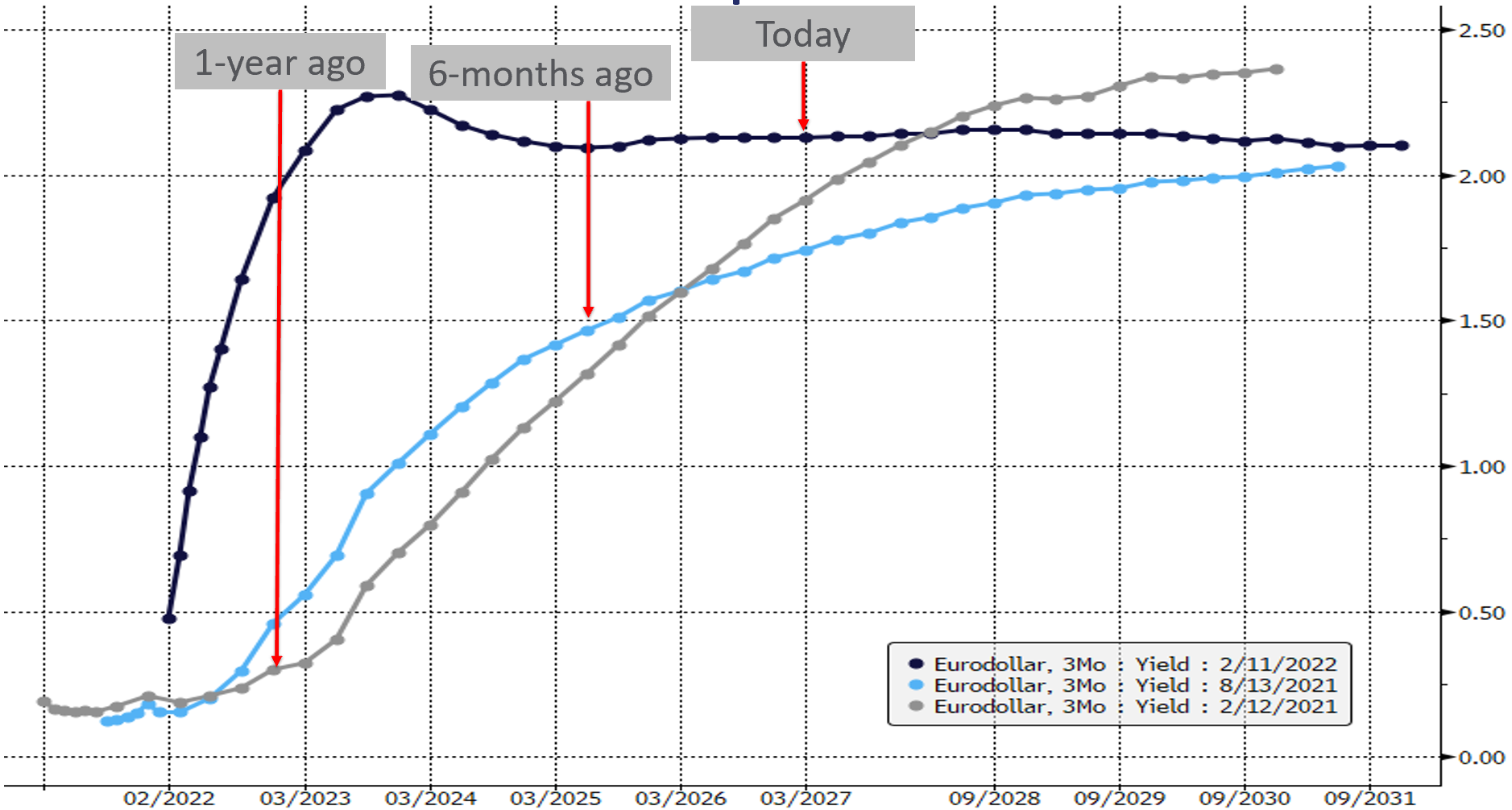 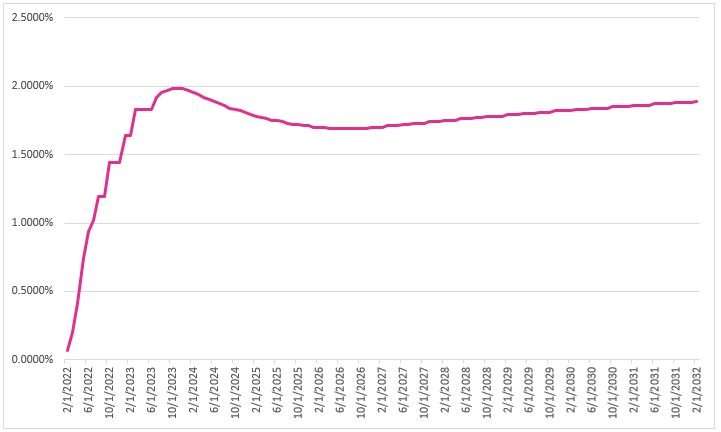 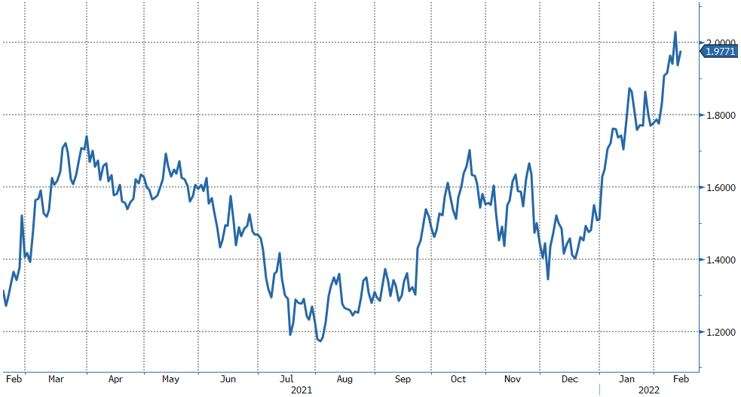 Click here for more DL Reports
Too Far, Too Fast

Ukraine vs Fed Create Tug Of War
Scroll to top