Rates At A Crossroads

Last Week: Interest rates were mixed, and equities rose on the week, despite a record number of new daily COVID-19 cases in the US and near-record levels globally. To put the number of cases in perspective, consider the fact the US is recording about one Wuhan per day (50,000). Upbeat economic data and the changing composition of new infections, which now skew more to younger individuals than earlier in the pandemic, helped underpin risk sentiment. The yield on the US 10-year Treasury note rose 3 basis points to 0.67%, as 1-month LIBOR fell one basis point to 0.1626%.  The price of a barrel of West Texas Intermediate crude oil rose $2 to $40, while the US Dollar and Gold both weakened. Treasury yield volatility, a key driver of the cost of rate caps and swaptions, fell throughout the week.

Beware: positive jobs data is not what it seems. More than 4.75 million workers were re-employed in June, as the US economy opened further after being largely locked down from the end of March through April. America’s job creation performance caught markets by surprise, who expected about only 3.2 million workers would be re-hired last month. May payrolls were revised up by an additional 190,000 jobs to 2.7 million. The unemployment rate declined to 11.1% in June from May’s 13.1% rate. Interest rates initially rose on the positive news, but then settled back down to their well-worn ranges shortly thereafter. 10-year Treasury yields specifically touched a roughly one-week high of 0.71% after the job data’s release, but the move higher quickly faded, with the 10-year ending the day at 0.67%, right in-line with its average for the past three months.

Digging into the data, the biggest improvement in payrolls was in categories that were hit hardest by the initial virus outbreak. Service jobs, such as leisure and hospitality, which generally pay lower wages, are recovering at the fastest rate. Higher-paid professions, such as financial and business services, have rebounded at a more tepid pace. For some perspective, the level of employment remains significantly below the pre- pandemic peak after incorporating both the increase in June and the 2.7 million figure for May. America’s economy lost an eye-watering 22 million jobs over the March-April period. Part-time employees, now over 9 million, roughly double what the number was in February. The survey also didn’t include the second half of June when re-closings ramped up…

Our take: As we said last week, the positive job surprise demonstrates that US economic fundamentals remain strong enough for a robust economic recovery once Covid-19 is under control. In the meantime, the data’s positive signal will soon fade given the recent acceleration in new virus cases and the looming income cliff stemming from the expiration of Federal unemployment benefits at the end of this month. Further, a sharp deterioration in incomes (aka average hourly earnings) and normalization in hours worked depict a more precarious picture for the personal income trend. What will keep the positive momentum going? In the near term, an extension and fine-tuning of Congress’s stimulus to businesses and the unemployed. In the long run, the development of effective COVID-19 treatments and a vaccine. Until then, rates will likely stick to their well-worn ranges, at least through month end.

Other gauges showed rebound’s momentum. The jobs data, combined with an upbeat Institute for Supply Management (aka “ISM”) manufacturing purchasing managers’ report (52.6 in June from 43.1 in May, the highest reading in over a year) and surging pending home sales (up 44% in May), suggests that the economic rebound, at least before many state’s economies shut for a second time, had a good deal of momentum.

Our take: Given the magnitude of the observed drop in industrial production – still down 15.4% from February levels in May – the ISM data marks an initial turn in the level of output, but not an imminent recovery to pre-pandemic levels. While useful, the ISM is providing valuable confirmation on the timing and direction of change but remains a poor guide on the level of manufacturing activity relative to the pre-shock trend. All told, last week’s data confirm our belief that the path to recovery will be lengthy, and progress on suppressing the virus will determine the need for further lockdowns or restraints on people’s movements.

Fed Chair Powell hammered home a “Whatever it Takes” message while repeating need for more aid. In his prepared remarks before the House Financial Services Committee, Powell cited a pickup in hiring, increased spending and a strong rebound in consumer spending but noted that the path to recovery remains extraordinarily uncertain. He said the Fed is strongly committed to using its emergency lending programs and other tools to limit economic damage and ensure that the recovery is as strong as possible. While treading carefully, the Fed Chair indirectly urged for continued fiscal-policy support by tying the recent improvement in certain economic indicators – notably the latest payrolls and consumer spending data – to aid from measures including the Paycheck Protection Program. Last but certainly not least, Powell confirmed that the Fed continues to study yield curve control but suggested the central bank is in no hurry to adopt that policy. As an aside, Congress extended the Paycheck Protection Program until August 8th. The program had been slated to expire on June 30th.

Our take: Powell’s comments tell us that Congress will indeed extend stimulus programs, it is just a question of how they will be re-calibrated and when they will be deployed. Look for our scenario analysis in next week’s DL Monitor.

What to Watch This Week: This week will be quiet on the data front, but big events this month will be pivotal in defining the trajectory of economic growth, and interest rates, for the remainder of the year. Here is a quick, high-level rundown:

Until we arrive at several of the points above, it leases rates at a crossroads, trading within their well-defined ranges.

Big Picture. Interest rates sticking to their familiar tight ranges for yet another week and dwindling trading volumes in debt markets suggest that the normal summer doldrums have arrived, a condition set to last through month end. Looking beyond the summer however, several possible actions by the Fed could rock rates out of their slumber, specifically curve sculpting (aka Yield Curve Control), employing negative interest rates, and eventually rate hikes (we expect the first in late 2021 or early 2022 assuming the economic environment improves notably before year’s end). Look for an analysis of each in future versions of DL Monitor. 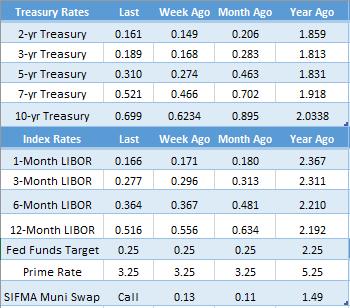 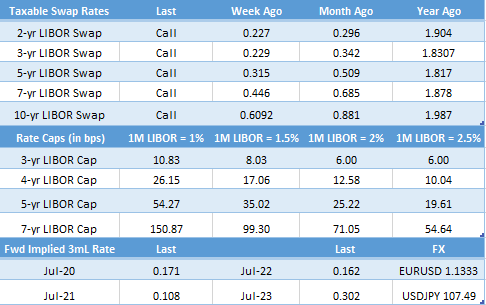 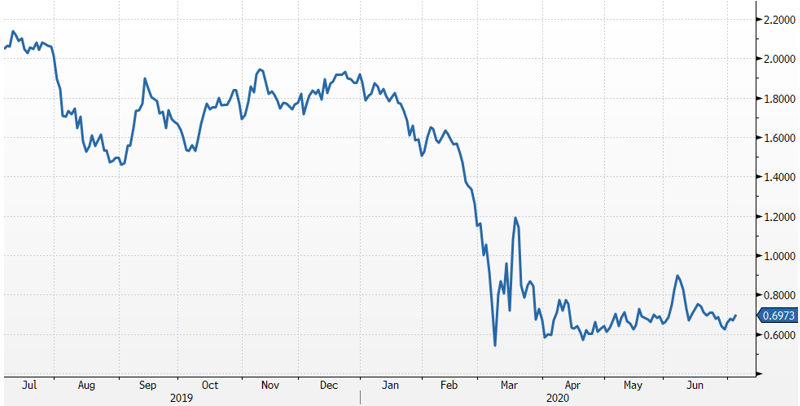 Swaps are Back
Scroll to top