Last Week: US interest rates were mixed, and equities were little changed on the week on concerns that the rapidly spreading coronavirus outbreak in China could inhibit global growth.  The yield on the US 10-year Treasury note cruised lower by 14 basis points, to 1.67%, a two-month low. 1-month LIBOR rose a paltry 1 basis point to 1.66%. The price of a barrel of oil declined $4.50 to $54.50, while the US Dollar and Gold both strengthened amid investors flight to safety. Treasury yield volatility awoke from its multi-week slumber to rise to 4.28 from 3.95 this time last week.

DL NEWS FLASH: We’re officially in the defeasance business. Need to defease a loan? Consider us as your defeasance advisor and enjoy the white-glove service, competitive fees and strategic advice that you’ve come to enjoy. Contact us for a quote.

Why the coronavirus outbreak in China is impacting US Treasury yields. 10-year Treasury yields fell to a level unseen since early November last Friday, as investor demand for safe havens surged as cases of the deadly virus were reported in the US and Europe. Early estimates suggest the epidemic could shave 0.5% to 1% from China’s projected 2020 growth rate of 6%. As a result, prices for commodities such as oil have fallen, as have most interest rates, amid dampened prospects for a global economic rebound following last year’s trade-war disruptions. For some perspective, the virus-driven flight to safety pushed yields out of the quarter-point or so range they’d been stuck in for months. The 10-year Treasury yield peaked just below 2% in November amid optimism over a U.S.-China trade deal. Before last Friday, it hadn’t traded below 1.7% since early December. Yields for longer term maturities – like the 10 and 30-years Treasuries – fell the most this past week, flattening the yield curve the most in more than a month. A few weeks ago, the curve was at its steepest since 2018 amid easing trade friction. Looking ahead, in past instances of a virus outbreak, bond yields tended to decline over a 3-4 week window before reversing in short order, and we expect the same this time around. For the week ahead, we expect the volatility and downward pressure on yields to continue as trading flows fall below average with Chinese markets shut for the Lunar New Year holidays.

Thus far, 98% of confirmed global infections are in China, and more than a dozen countries and territories have reported the illness has crossed into their borders. However, officials from the World Health Organization have thus far stopped short of declaring the outbreak a public health emergency of international concern. For now, at least 11 Chinese cities, including the important transportation hub of Wuhan, are on lock-down for Lunar New Year celebrations as officials scramble to contain the spread of a deadly coronavirus. Chinese authorities have stated that the virus isn’t yet under control despite aggressive steps by authorities to limit its transmission. Should confirmed cases skyrocket in multiple cities and continents, expect Treasury yields to plummet precipitously. Conversely, should authorities gain control with the outbreak showing signs of fizzling out, expect yields to rise again, back to their recent ranges.

US data showed services activity continues to outpace manufacturing. Activity in the US service sector improved in January. Its preliminary service sector purchasing managers’ index for January rose to 53.2 from 52.8 in December, while the manufacturing PMI staged just the opposite performance, declining to 51.7 from 52.4 the prior month. Why you should care: America’s lackluster manufacturing sector has been a persistent drag on economic growth, and a drag on any move higher in interest rates. Last week’s data showed that any turnaround is likely far off in the future, as is an outsized surge in growth and inflation, giving the Fed confidence to continue its “on hold” stance.

What to Watch This Week: The key event this week is the Fed’s January interest rate setting meeting, with the release of the decision and accompanying statement at 2:00PM ET on Wednesday, followed by Fed Chair Powell’s press conference at 2:30 PM. In a busy week for economic data, the key releases are the durable goods report on Tuesday and the initial Q4 GDP report on Thursday.

While no one expects the Fed to hike or cut rates at this week’s meeting – or at any meeting this year – the spotlight will be on Fed Chair Jerome Powell’s press conference and the central bank’s ongoing repo operations amid mounting market speculation that it’s equivalent to a new, fourth round of quantitative easing (“QE”).

On the data front, Tuesday’s durable goods data will be closely scrutinized for signs of ripple effects from the Boeing 737 Max grounding. Now that the halt in the troubled aircraft’s production is set to last longer than expected, the ~0.5% drag it’s having on Q1 economic growth will likely now spillover into Q2. Crazy fact: Boeing holds unique sway in America’s economy as the largest US goods exporter and as the largest weighted stock in the Dow Jones Industrial Average.

Friday’s consumer surveys are expected to indicate a continuation of strong consumer sentiment, disregarding any negative impact from the news on the coronavirus spreading from China, at least for now. It’s critical that the almighty US consumer keeps its chin up; it’s the driving force behind America’s economic growth.

Finally, in regard to Thursday’s Q4 GDP report, we expect that GDP growth slowed slightly in the final quarter of last year. Nonetheless, the Fed will maintain its assessment that the economy is in “a good place,” and save its ammunition for a more critical slowdown in America’s economy.

Take-Away: It all equates to a scenario where rates – barring a global outbreak in the coronavirus – trade at the lower end of their recent ranges for the foreseeable future. That being said, we suspect the probability of a rate cut to promote growth this year is higher than that of a hike to curb inflation. For now, the Fed will hold its steady-as-she-goes course on rates unless there is a “material change” in the economic outlook to avoid any appearance of political interference in an election year.

What would constitute a “material change” you ask? Well, it would be something like equity or fixed income market turmoil, a rapid deterioration in the economy or an acute re-intensification of trade tensions. Barring those events, the Fed’s hurdle to shift gears will be high, and rising, to avoid the appearance of political interference as November draws nearer. 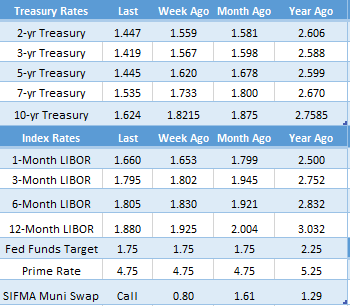 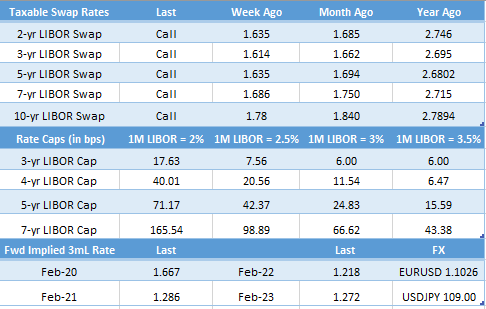 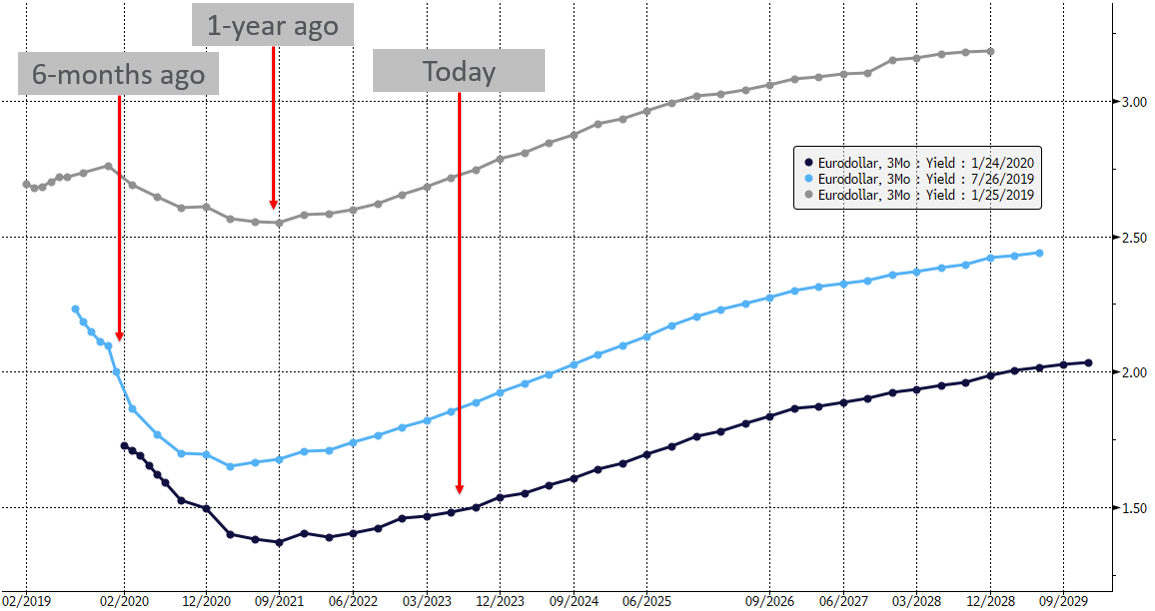