Last Week: Long term interest rates fell, and equities rallied strongly, despite lower odds of a multi-trillion-dollar fiscal stimulus in the next few months. The yield on the US 10-year Treasury note declined to 0.81% from 0.83% last week, though early on Election Night the rate surged to around 0.95% and the yield curve flattened substantially after it became clear that a Democratic sweep of Congress had not occurred. The price of a barrel of West Texas Intermediate crude oil rose $1.50 to $37.60 while the US Dollar weakened, and Gold strengthened. Treasury yield volatility, a key driver of the cost of rate caps and swaptions, fell steadily to close the week.

Biden’s Presidential win shifts the path toward more stimulus and economic growth. While the news over the weekend does clarify things to some extent, much remains fluid. President Trump has not conceded. The chances of a mild “blue wave” hinge on two run-off-bound US Senate races in Georgia, so control of the Senate will not be known until January 5th. Still, with the winner of the race for the White House now declared, it’s enough to narrow the range of possible paths toward more stimulus and overall economic growth.

A divided Congress and a persistent fiscal impasse look highly likely. Should it come to fruition, a split House and Senate means that any looming fiscal stimulus package may be limited, somewhere in the vicinity of $500-$750 billion, creating both macroeconomic disappointment and microeconomic pain for households and small businesses, many of which are hanging on by a thread amid rising virus infections and the threat of fresh lockdowns. On the flip side, a split government also means reduced odds of near-term tax hikes, a positive for corporations and high earners.  With a stabilizing career politician skilled at governing, a reduced threat of higher taxes could soften the blow of a lighter than hoped for fiscal stimulus package.

What it means for the Fed and interest rates. No matter who ends up with the majority in the Senate, the Fed will stay in “whatever it takes” mode until the economic recovery has truly blossomed and the health crisis has ended, focusing on promoting continued strength in specific interest rate sensitive sectors like housing and automobiles until then. The Fed’s “whatever it takes” mode does not mean they are going to manage the health crises.  Control of the virus is the path to a recovery and the Fed does not have the mandate to oversee the scientists. With fiscal support from Congress looking both smaller and less likely, the Fed will have to get creative in the use of its tools to steer the economy back toward prosperity. As such, short term rates will remain at or near zero through 2021 and likely beyond.

For long-term rates, like the 10-year Treasury yield, expect a gradual drift higher over the coming quarters, as efforts at fighting the virus succeed and the Biden administration achieves some progress on the regulatory, trade and infrastructure fronts. However, no matter how high and fast long-term rates try to rise, their ascent will ultimately be blunted by a Fed who will make sure rates stay low, aiding borrowers in their attempt at financing a recovery. Looking ahead, markets will trade with a divided government baseline through the end of the year, with the evolution of the virus (vaccine anyone?) dominating rate moves in the coming months. Given the worsening virus risk and likelihood that fiscal support won’t materialize until next year at soonest, we’d guess yields will trade in a range – with the 10-year Treasury yield trading in the .70%-1.10% range – going into year-end. Short term rates will remain anchored near zero.

America continued to add new jobs in October. The US unemployment rate fell much more than expected in October as the labor market continued to heal after being slammed earlier in the year by the pandemic. 638k in new jobs were created last month – down slightly from the 672K created in September – while the unemployment rate declined to 6.9%. Peeling back the onion, the new jobs are only showing up in certain sectors of the economy and not others: Jobs involved in the production of physical goods continued to benefit from the pandemic-driven surge in demand, while hiring for service-related jobs decelerated. After tallying October’s job report, the economy has recouped just over half of the 22 million jobs lost when the unemployment rate peaked at 14.7% in April as 11.2 million workers have now returned to work. While inspiring for sure, we are guessing that the rising number of COVID-19 cases suggests it will be increasingly difficult to sustain that pace in the months ahead. The size and timing of a fiscal stimulus package will have a big impact on where things go from here.

Steady-as-she-goes Fed kept rates unchanged. Chair Powell & Co. kept monetary policy in a holding pattern, leaving interest rates near zero and making no change to asset purchases. Its post-meeting statement was mostly unchanged, largely repeating language on the economy it has employed since July. Chair Powell struck a negative tone in his post-meeting press conference, stressing the Fed’s concerns over risks the economy will face for months from the pandemic. The largely non-event Fed meeting left us with the feeling that the Fed remains ready to do more if needed but is sitting on its hands as the political scenario evolves. No one sees rate hikes until 2022 at soonest. The yield curve should steadily steepen over time, but only modestly so as the Fed ensures long-term rates also remain low. With other central banks – notably the Bank of England, the European Central Bank and the Bank of Japan – all engaged in extraordinary monetary easing, rising long term rates is a tall order, with or without the Fed’s guiding hand.

What to Watch This Week: Yields have basically shrugged in reaction to the tumultuous series of events over the past week. Such moves suggest that expectations of a relatively modest fiscal stimulus package will show up in the beginning of 2021. Solid economic data, including on the jobs front, as well as an unequivocal pledge of support from the Fed has helped keep yields in their current ranges.

This week the focus will shift from uncertainty surrounding the vote to the economic rebound from the pandemic. Mostly second-tier economic data is on tap in the week ahead, which will likely show that while the nascent economic recovery motors on, its fragility and potential for disruption by the pandemic lingers. We may see an uptick in yields this week, as the US Treasury unloads an unprecedented $122 billion slate of note and bond issuance.

Of the economic releases on tap, we will be focused on the Senior Loan Officer Opinion Survey (Monday) which will reveal whether banks have eased lending standards following a sharp tightening during the pandemic outbreak earlier in the spring. We are guessing that the purse strings remain tight and that the role of credit as a growth accelerator will diminish, hindered by bankruptcies, tighter lending standards, and uncertainty prompting many to pay down debt and borrow less. Over time, we expect this dynamic to cap the pace of consumer spending and restrain the overall economic recovery.

Big Picture: The economic recovery remains uneven against a backdrop of surging Covid-19 cases, which is increasingly clouding the outlook. With more than 12 million Americans still out of work, and many of them permanently, sustaining the recovery will be the key policy objective for the Biden administration. Signs of success are ripening however, and with a ton of economic and monetary-policy stimulus in the system already, upward pressure on prices will begin to show up eventually, and higher long-term yields and a steeper curve with them. The question now is just how many virus induced ups and downs we will have to endure until then. 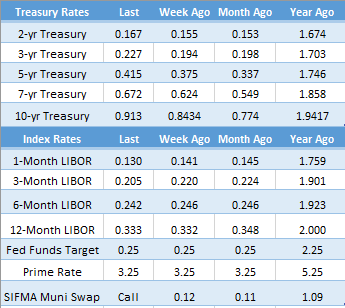 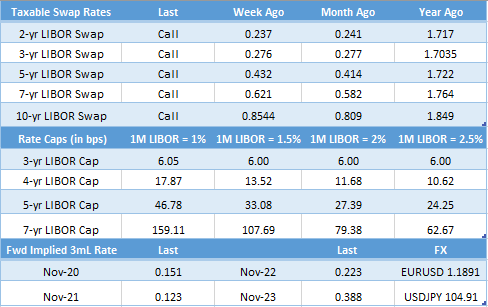 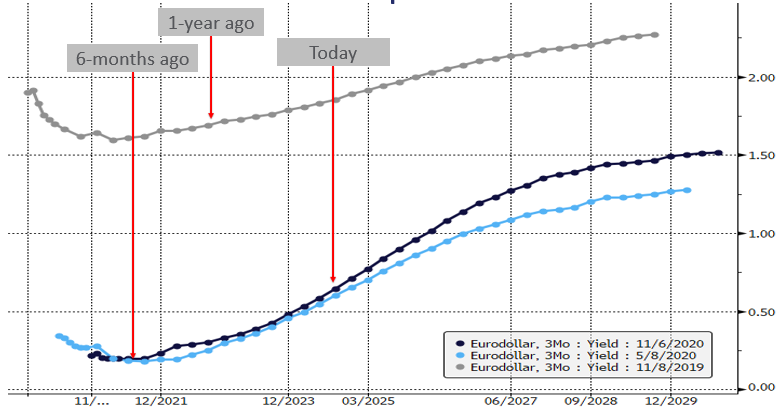 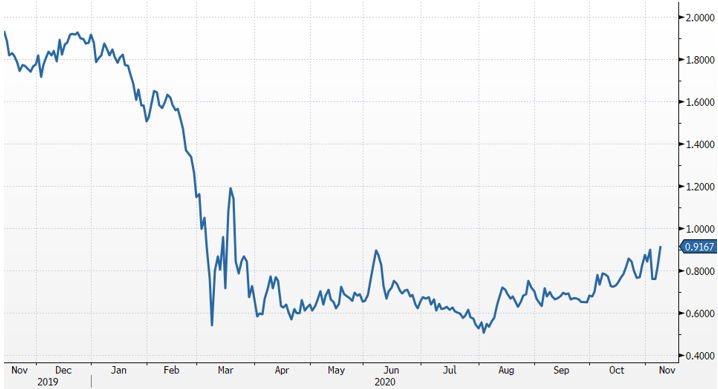